Word has it that Trump or Sessions will fire Rosenstein at some point this day. Or perhaps tomorrow.

Said word derives from a Trump tweet, which advised the public to tune into last night's Hannity. On that broadcast, lawyer Joe DiGenova -- who seemed to possess inside information -- spoke of Sessions firing Rosenstein "tomorrow." Meaning today.

(Side note: When will pundits stop claiming that Trump "takes his cues" from Fox News? The cue-taking obviously runs in the opposite direction. Trump is the de facto head of the network.)

Many have pooh-poohed the idea that Rosenstein will get the ax, on the grounds that so brazen a move could cause both the House and Senate to go blue. Sorry, but the so-called "blue wave" won't reach unmanageable size. Two reasons:

1. I am increasingly persuaded that Trump will soon score an arranged "victory" in Syria -- "victory" being defined as the downfall of Assad, with Russian acquiescence or even (putative) humiliation. As noted in two previous posts, the great untold story here is that Russia has, in essence, switched sides in the Saudi/Iran conflict. Assad is now a liability to the Russians. It serves Putin's larger purpose if Trump the Mighty can be seen as "forcing" Russia to do something it wants to do anyways: Get rid of Bashar Assad.

This coup de theatre -- planned weeks ago and soon to be staged -- will go a long ways toward blunting the Trump/Russia collusion narrative, and will cause Trump's popularity to soar. He will not be a drag on the party in November. If the timing is right, the GOP may even gain seats.

Odd thought: What if Trump simply kills Assad with a missile or drone strike?

If such a thing is technically do-able, why not do it? Sure, the Russians will complain, but only to keep up appearances. I'll say it again: Russia's new friendship with the Saudis makes Assad a liability; Putin won't feel overly choked up if Assad joins Khaddafy in hell.

Murdering Assad will not result in a war between Russia and the United States. There is no real conflict between Trump, Putin and the neocons.

2. Many Democrats share my belief that our voting tabulators are vulnerable -- yet the Dems continue to speak as if such a thing won't really happen. Grow up. Face reality. Stop whistling past the graveyard. All that is necessary is for Republican numbers to edge sufficiently close to the 50 yard line; the manipulators can nudge a candidate a few feet as necessary. Nowadays, any Republican who can get 45 percent will win.

I don't foresee a "blue wave" in November. If I'm right, then Trump has the political freedom to wave "bye bye" to Rosenstein -- and, eventually, to Mueller. Making matters worse, the rationale for getting rid of Rosenstein is annoyingly defensible.

My bet is that we will be dealing with Trump for a long time to come. I hope I'm wrong.

Bannon. Bill Palmer noticed that the latest news on the Bannon front -- that he is working with the Trump White House on an anti-Mueller strategy -- conflicts with his (Palmer's) belief that Bannon "flipped" and began cooperating with Mueller. Palmer argues that Bannon has re-flipped back to Team Trump.

Look, it's simple: Mueller never flipped Bannon. In the first place, Steverino is too damned arrogant to play ball with Mueller. In the second place, Bannon knows that one does not fuck with the Russian mob.

Yes, it is true that investigators interviewed Bannon for a long, long time. The duration of that interview means only Bannon decided to hang tough, and may even have lied when he felt the need to do so. The interview must have taught him a great deal about what Team Mueller is doing and how much they know. That information went straight on to Trump's associates -- which explains why and how Bannon became a "player" again.

The preceding paragraph is not based on inside information; it's simply my current Theory of Bannon. But it makes sense, dunnit?

The raid. We know that the raid on Trump's lawyer was conducted by the Southern District of NY U.S. Attorney's office, and that the whole thing had to be run past a judge. Benjamin Wittes says that the judge would have demanded a standard of evidence far higher than "probable cause."

So why the hell are we being told that this raid was -- at least in part -- prompted by the Access Hollywood tape? That tape is now a known quantity. It contains no evidence of a crime. Evidence of sleaze, yes -- but not of a specific crime.

My best guess is that Cohen arranged a pay-off intended to keep that tape away from the public during the campaign. So why did we end up seeing the thing in October, 2016? Perhaps the person who received the payment decided to back out of the deal.

We know from the Stormy Daniels case and from the McDougal case that Cohen and Trump tend to go "Charlie Cheap" when it comes to these hush-hush payoffs. Why aren't they more generous? Perhaps because the pay-ees are so numerous. Large amounts of money are hard to raise and hard to hide, so Team Trump probably had to keep the total "hush-hush" budget under a certain figure. 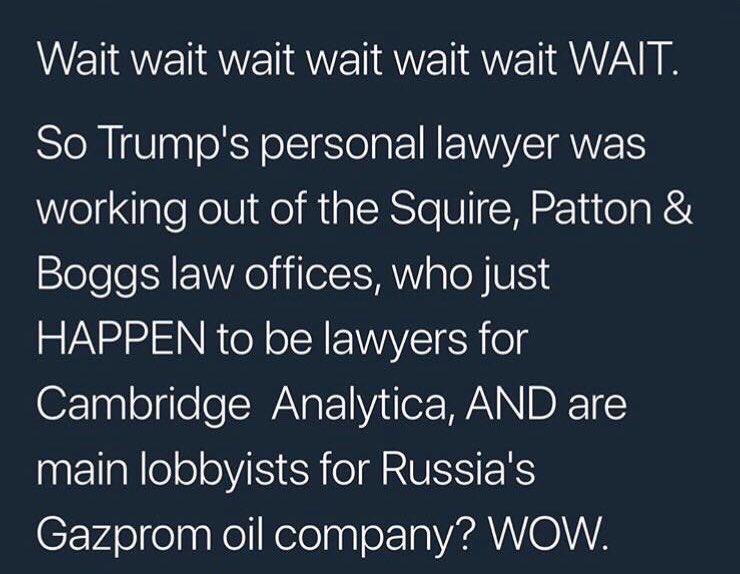 
He made a “strategic alliance” with the law and lobbying firm Squire Patton Boggs, and the RNC named him national deputy finance chair.

But shortly after Trump’s inauguration, Cohen made headlines again, on a matter of international intrigue. On January 27, 2017, Cohen and his business associate Felix Sater had met with Andrii Artemenko, a pro-Russian Ukrainian lawmaker whom Cohen had known for years. Artemenko gave them a purported proposal for a peace deal between Ukraine and Russia — paired with alleged evidence of corruption that he said could be used to discredit Ukraine’s president. There have been conflicting reports on whether Cohen then delivered this document to the White House and then-National Security Adviser Michael Flynn.

This goes some ways toward explaining how Mueller, in the course of investigating Cohen's Russian ties, might have come across the information that led to the raid. The law firm, for its part, has severed all ties with Cohen -- rather belatedly, it would seem.

A Trump "love child"? Actually, "love child" seems the wrong term: This is Donald Trump we're talking about. Is there such a thing as a hate child?

The story -- which I suspect will grow in importance in the coming days -- is fairly simple. Karen McDougal wasn't the only one to receive a roundabout "catch and kill" hush payment by way of the National Enquirer. Dino Sajudin, a former doorman at Trump World Tower, received $30,000 to keep quiet about the rumor that Trump impregnated a female employee of that building. Radar Onlinr (an AMI publication) took point on this tale...

That’s the bombshell claim of a disaffected former Trump staffer who is peddling the allegation to various media outlets, including The National ENQUIRER, a sister publication of RadarOnline.com.

My first thought: Would Team Trump pay anyone $30,000 to squelch a false story?

My second thought: If the tale were true, why so low a figure?

My third thought: Presuming (for the sake of argument) the tale to be true, Saludin can offer only second-hand info. The pay-off need not be high in his case because his allegations are easily dismissed. The real pay-off must have gone to that gorgeous medical graduate.

Since a kid is involved, it's likely that the pay-offs are ongoing. Perhaps monthly.

Ronan Farrow of the New Yorker offers the most in-depth coverage.


Two of the former A.M.I. employees said they believed that Cohen was in close contact with A.M.I. executives while the company’s reporters were looking into Sajudin’s story, as Cohen had been during other investigations related to Trump. “Cohen was kept up to date on a regular basis,” one source said. Contacted by telephone on Wednesday, Cohen said that he was not available to talk. Subsequent efforts to reach him were unsuccessful. On Monday, F.B.I. agents raided Cohen’s hotel and office. The Times reported that the agents were looking for records related to the payments to McDougal and Clifford, as well as correspondence between Cohen, Pecker, and Dylan Howard, A.M.I.’s chief content officer.

Texts and e-mails from November of 2015 show that, before reporting was halted, the National Enquirer team was pursuing leads and trying to confirm Sajudin’s story. Reporters had staked out the homes of the alleged mother and daughter. The company had also hired an outside private investigator named Michael Mancuso, a former criminal investigator and the owner of Searching for the Truth Investigative Services, who administered the lie-detector test. (Mancuso declined a request for comment.) Lie-detector tests are notoriously flawed, and the test assessed only whether Sajudin had heard the story, not whether there was truth to the underlying claim.

Sharon Churcher, one of the lead A.M.I. reporters on the story, told me, “I do not believe that story was true. I believed from the beginning it was not true.” Other employees at A.M.I. had questions about Sajudin’s credibility. In 2014, a Web site registered through a service that obscures the identity of the author claimed that Sajudin had made similar accusations against a Trump Tower resident named Lawrence Penn III, and that those accusations were false. (Penn could not be reached for comment. In 2015, he pleaded guilty to securities fraud, and he is currently serving a six-year prison sentence. Penn’s lawyer did not respond to a request for comment.) When I reached out to Sajudin, he responded, in an e-mail, “My time is valuable. What’s your offer??” After being told that The New Yorker does not pay sources, Sajudin declined further requests for an interview.

Okay, so this Sajudin guy seems pretty scuzzy. The question remains: Why bother to pay him anything? I've seen no indication that he has offered proof. Hell, it's possible that Sajudin is covertly working for Team Trump, and that his job is to mislead investigators by tossing about various red herrings.

On the other hand, this administration has taught us one great lesson: When weighing several possible solutions to a Trump mystery, the sleaziest solution has the greatest likelihood of proving true.

We won't be able to know more unless and until we can identify "mom." A name will probably tumble out soon.


The woman had long, black hair and was wearing grey UGG boots, she said. Another witness said the woman was fully dressed with her coat on.

Cops were examining the 14th-floor balcony of the building, which houses a number of diplomats.

According to this story, the woman (name unreleased) had fought with her boyfriend and left a note behind.

Pecker and the Saudis. Heretofore, we've been led to think that it was Jared Kushner who formed the alliance with Saudi Arabia's young de facto leader. But the Farrow article contains an easy-to-overlook nugget...


According to the Times, last July Pecker visited the Oval Office and dined at the White House with a French businessman known for brokering deals with Saudi Arabia. Two months later, the businessman and Pecker met with the Saudi crown prince, Mohammed bin Salman.


Its headlines credit the prince with “Transforming the World at 32” and being “Our Closest Middle East Ally Destroying Terrorism.”

There is no mention of the prince’s recent detention without trial of other royals, Saudi Arabia’s role as the birthplace of many of the 9/11 hijackers, or the country’s history of general human rights violations, especially when it comes to women’s rights.

The Daily Beast on Tuesday called it a “Saudi propaganda magazine.”


The publication cost $13.99. Who in his right mind would pay for such a thing? I doubt that many copies were sold. Obviously, this publication came into existence for the sole purpose of pleasing MBS.
posted: 8:07 AM