Sorry to take a couple of days off. I spent a day having adventures away from home, followed by another day of recuperation. Kids, follow my advice: Do not age.

At this point, only a fool would apply any "ifs" to the basic Stormy Daniels story; the tryst has been proven beyond reasonable argument. Nobody pays $130,000 to hush up a non-existent affair. She told the story to associates years before the election, and some of those associates have since come forward. The In Touch interview was conducted in 2011, well before Trump announced his candidacy for the 2016 election.

The most important factor, to my mind, concerns the allegation of a physical threat to Stormy Daniels, delivered in the presence of her infant daughter.


Shortly after her 2011 interview, Ms. Daniels says that she was threatened by one of Mr. Trump’s associates while with her infant daughter: “A guy walked up on me and said to me, ‘Leave Trump alone. Forget the story,’” she told Anderson Cooper. “And then he leaned around and looked at my daughter and said, ‘That’s a beautiful little girl. It’d be a shame if something happened to her mom.’ And then he was gone.’”

Shaken by the focus on her daughter, Ms. Daniels was too terrified to even go to the police. She stayed silent for five years, and in 2016, took a US$130,000 payoff from Mr. Cohen to stay that way. This was a sensible course of action given Mr. Trump’s four-decade history of getting ruthless lawyers to threaten any potential opponent with financial ruin – a pattern that begins with Mr. Trump’s employment of political operative Roy Cohn in the 1970s and continues with Mr. Cohen today. Mr. Trump’s main weapon of choice may be the NDA, but his team makes sure to imply that other weapons can be used as well.

Is this claim credible? I believe so.

Buzzfeed writer Jason Leopold relates a similar story from 2009. At that time, Trump's casino businesses went bankrupt. (The actual paperwork is here.) Attorney Kristopher Hansen, who specializes in providing counsel to debtors, represented the parties to whom Trump owed money. On February 18, at 2:05 pm, Hansen received a threatening phone call which he immediately reported to the police and to the FBI.


“My name is Carmine. I don’t know why you’re fucking with Mr. Trump but if you keep fucking with Mr. Trump, we know where you live and we’re going to your house for your wife and kids,” the caller said, according to the account that the attorney, Kristopher Hansen, gave to the Holmdel police department in New Jersey. Hansen speculated that the caller was Trump’s bodyguard.

"Carmine"? Ye gods! Only "Guido" or "Vito" would have been more obviously bogus.

The FBI traced the call to a phone booth across the street from the Ed Sullivan Theater, where Trump showed up to appear on the David Letterman show, which began taping at around four in the afternoon.

(The Stephen Colbert show tapes there now. Wouldn't you love to see Colbert do a segment publicizing this matter?)

It would make sense for Trump's bodyguard, Keith Schiller, to show up at the taping location two hours before the show began. Believe it or not, there was an honest-to-God old-fashioned pay phone at that location in 2009. (Are such things common in New York? Here in Bawlmer, you can't find an operating pay phone anywhere).

Guess what? It's still there! 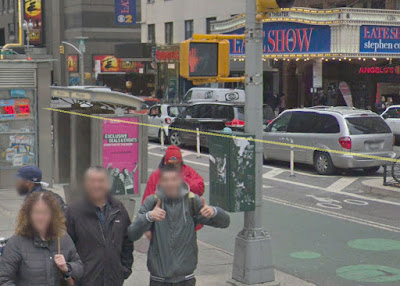 I have no doubt that either Schiller or Trump himself made the call to Hansen. A respected bankruptcy attorney is not going to call the authorities unless an actual threat occurred. The FBI's paperwork traces the call to the phone pictured above. The fact that Trump and Schiller were provably at that specific location at that time seals the case beyond rational argument.

Many have suggested that Keith Schiller was the one who threatened Stormy Daniels in 2011. Trump did indeed visit Las Vegas in April of that year -- in fact, his incendiary, profanity-laden speech to a Republican group aroused a great deal of controversy, although it is now largely forgotten.  Also see here:


On how to deal with OPEC to lower oil prices?

"We have nobody in Washington that sits back and said, you're not going to raise that f—-ing price," Trump said, according to KTNV in Nevada.

And how he'd tell China he wants to slap a tariff on their exports?

"Listen you mother——ers we're going to tax you 25 percent!"

He assured a woman in the crowd who urged him to run that he expected to make her "very happy," but added later, "there is a really good chance that I won't win because of one of these blood-sucking politicians.


Amusingly, he also called John McCain a "wonderful guy" on that occasion. It is clear that Trump seriously considered making a run for the presidency in April of 2011, even though he did not yet understand that he would have to launder his mouth. It is also clear the "Stormy" problem must have weighed on his mind.

Speaking on Brad Friedman's show, Jason Leopold discusses this threat and two others which Trump has made over the years. Leopold's sources: FBI documentation released via FOIA.

On his show last night, Chris Hayes discussed other examples of threats and intimidation. Unfortunately, the MSNBC video won't "play nice" with this blog, so I can't embed it; if you have not already seen the segment, go here. Once again, Keith Schiller is directly fingered.

Someone in authority should interview Mr. Schiller. His picture is embedded toward the beginning of this post.

Many on the right have formed the impression that the Resistance opposes Trump on the basis of his policies. What policies? Trump used to be a Democrat; he has no convictions, just shifting alliances based on self-interest. To cite but one example: During the campaign he championed gay/transgendered rights, yet he now would ban transgendered people from the military. And let's not mention DACA or Qatar.

I wake up every day hoping to find some way to ease Mike Pence's way into the Oval Office -- yet Pence would be even worse in terms of policy, for he really does have convictions.

Liberals considered Trump risible even when he was a Democrat who supported the Clintons. Risibility has congealed into loathing -- but not because Trump espouses policies we disdain, and certainly not because he opposes a quasi-mythical entity called the "Deep State" (which, like the Illuminati and the Paladium, has become merely a scarecrow to frighten the gullible).

We despise Trump because he's Trump. He has always been Trump, even when he lurked on the other side of the political aisle.

He's a con man. A thug. A brute. A kind of gangster. A creature of low appetites. Ill-read, unthinking, self-absorbed, shameless, ruthless. Talented only at wielding the grosser and most primal forms of manipulation, he is the living embodiment of everything indecent and depressing in the human condition.
posted: 8:36 PM