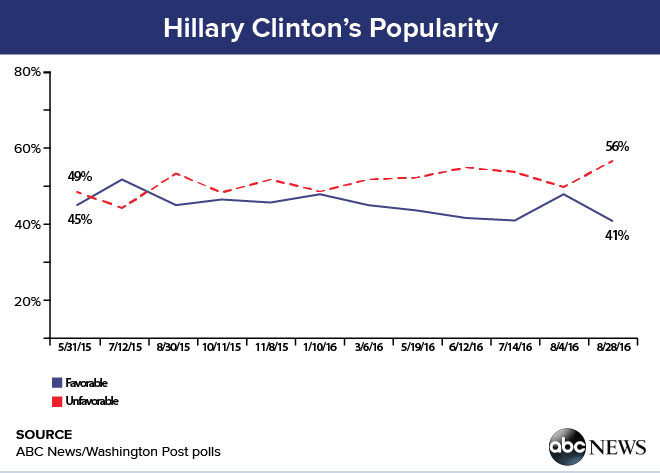 Clinton’s rise in unpopularity follows renewed focus on her use of a private email server and alleged conflicts of interest regarding her connections to the Clinton Foundation while she served as secretary of state. This metric rose among some of her core support groups, including women, postgraduates, Hispanics and liberals.

Suggestion: Hillary should deliver a half-hour long televised talk to the voters.

Maybe more than one. Maybe a weekly series.

The purpose of her address, at least the first one, would be to expose the lies.

Exposing the lies. That's how to frame it.

Begin with a precis of some of the most ridiculous fabrications told about the Clintons over the years. Ask the viewer: "Why have so many people lied about us? Why have they told lies about us that go way beyond the things said about other candidates? There's only one possible answer: Because I am the only one who truly threatens the entrenched power structure."

It's an easy argument to sell because it makes sense: How else can we explain all of the many anti-Clinton lies we've heard?

At the same time, she needs to rip apart Trump's reputation as a populist. If anyone is a consummate insider, it's Donald Trump, who -- in order to get what he wants -- has always played ball with politicians and mobsters. He considers himself superior to people who were not born into his class. He is the living embodiment of what Hamlet meant when he spoke of "the proud man's contumely."

(I'm not suggesting that Hillary should use a non-populist word like "contumely.")

And then she needs to take a stark, direct, no-bullshit look at the many current lies told about her emails and about the Clinton Foundation.

She needs to explain that Trump is hardly in a position to complain about national security, since his ties to Putin are obvious.

(I am suggesting that she use the phrase "damned liars." A minor profanity will make the point stick.)

She needs to emphasize that nobody created a firestorm of propaganda about George H.W. Bush's "Points of Light" charity, which operated while he was President.

She needs to emphasize that Colin Powell also had a private email server and also participated in a charitable foundation.

She needs to ask the viewers: Why did the Powers-That-Be ignore what those Republicans did while damning the Clintons for doing the exact same thing?

I am sure that advisers will tell her not to sound like a whiner or a conspiracy theorist. She should ignore that advice. It can only help her cause if she states that she and her husband have been conspired against.

Again: She needs to sound the populist note.

McGovern's "infomercials" (a term not in use back in 1972, although that's pretty much what they were) were simple affairs, visually. I recall them well: He spoke directly into a camera. Reagan's long-form ads were similar, but a little more visually interesting -- as I recall, he walked around in what looked like an upper-middle-class home office while talking to the camera. His reasonable, folksy delivery erased the suggestion that he was too extreme.

(I suppose that, in an American context, the form began with Richard Nixon's "Checkers" speech -- which, as many people now forget, proved to be quite effective.)

I think Hillary should upgrade Reagan's long-form format for a modern audience. More graphics. more cutaways to video footage, perhaps snippets of interviews with other people. What I'm envisioning is something a bit like John Stewart's Daily Show format, but with no audience and a much more serious tone.

That said, some humor will be helpful. Highlighting the most absurd anti-Clinton conspiracy theories would surely induce a few giggles. If these Clinton addresses become a weekly affair, people will tune in just to hear her dismiss the most outrageous claims with a well-crafted zinger.

The audience will appreciate Hillary if she displays genuine wit while exposing Trump's foolishness. Trump cannot return fire in a battle of wits; he's not bright enough. He's too low. His idea of humor is a schoolyard taunt and a thumb in the eye.

Will these presentations get high ratings? No. But they will appear on YouTube, and they will present Hillary's direct words. Viewers develop empathy with their favorite YouTubers. People tune into someone like Matthew Santoro every week just to watch him act silly while spouting interesting trivia -- but after a while, they ask themselves: What is he really like? He becomes a welcome visitor, someone you might invite to dinner.


The long-form format would allow Clinton to explain each and every point at length, without being sidetracked and interrupted by "gotcha" interviewers seeking to make a name for themselves.

The format will also allow her to mention what she actually proposes to do as president. On policy issues, most of her positions are more popular than Trump's.

Hillary Clinton certainly needs to do something now. Now is the time for her to start running as if she were behind. Because -- mark my words -- within two weeks, she will in fact be behind.

(That prediction comes with one caveat: I am presuming Trump will somehow manage to keep himself from doing or saying something incredibly foolish. With Trump, that's a rather hefty presumption.)

And for those of you who tell me to relax, stop worrying, look at the electoral college, yada yada yada -- I say this: Ostriches, do you still feel comfortable with your heads lodged firmly in terra firma? Don't you get sick of eating worms?
posted: 5:03 PM