Call me paranoid -- you won't be the first to do so -- but I can't read this story without thinking, once again, of Mars Attacks! Specifically, I'm thinking of the scene when the president of France calls Jack Nicholson to announce that he has signed a peace treaty with the Martians. Nicholson, having finally understood the true nature of the attackers, shouts "Get out of there...!" Too late: ZZZZAP!

Yes, I still think that Bernie will make an independent run. You see, I am the psychological opposite of HA HA Goodman: I tend to think that the the scenario I most fear is the scenario most likely to play out in real life.

Once again, those damned emails: Lord HA HA quotes this AP story to the effect that Hillary's server compromised the names of CIA agents. I question that.

As you read the following, remember: The server was primarily set up to communicate with Clinton's friend Sidney Blumenthal and his business partner, former CIA bigwig Tyler Drumheller...


At least 47 of the emails contain the notation “B3 CIA PERS/ORG,” which indicates the material referred to CIA personnel or matters related to the agency. And because both Clinton’s server and the State Department systems were vulnerable to hacking, the perpetrators could have those original emails, and now the publicly released, redacted versions showing exactly which sections refer to CIA personnel.

First thought: Maybe the "CIA PERS" (person employed by the CIA) was none other than Tyler Drumheller himself. He had previously been employed by the Agency but was "axed" to leave after he exposed Curveball as a fraud, exposed the "yellowcake" documents as forgeries, and exposed the Bush White House as a nest of liars about the WMDs. Drumheller, in short, was a hero.

The fact that Hillary set up this whole system to keep in touch with a straight-shooter like Drumheller makes me like her. That fact should have endeared her to the BernieBot die-hards. Too bad they've been brainwashed.

Second thought: In an earlier post, I suggested that Drumheller may have kept in contact with old Agency friends, and used this informal channel to relay information originating with the former Libyan intelligence chief and diplomat Moussa Kousssa. Turns out I was on the mark.

From a story published last October by Michael Isikoff:


“Tyler spoke to a colleague currently at CIA, who told him the agency had been dependent for intelligence from [redacted due to sources and methods],” the email states, according to Gowdy’s letter.

The redacted information was “the name of a human source,” Gowdy wrote to his Democratic counterpart, Rep. Elijah Cummings of Maryland, and was therefore “some of the most protected information in our intelligence community.”

“Armed with that information, Secretary Clinton forwarded the email to a colleague — debunking her claim that she never sent any classified information from her private email address,” wrote Gowdy in a letter to Cummings.


Gowdy is, of course, falsifying the situation by leaving out the most salient details. We'll get to that in a moment.

Right now, let's focus on this confirmation that Drumheller was talking to someone at CIA. We don't know who this person was or is. We do know that this personage would naturally receive the "B3 CIA PERS/ORG" redaction mark in the released version of the emails.

We know from previous articles that the "human source" was Moussa Koussa, formerly of Libyan intelligence. Naturally, this guy knew all sorts of stuff about African affairs. Drumheller gave Koussa's scuttlebutt to Blumenthal, who wrote it up and sent it all to Hillary Clinton.

So, were the emails trafficking in classified information? No.

Here's the key fact that everyone keeps forgetting to mention: Drumheller was not working for CIA at the time.

He was allowed to speak freely, to anyone he pleased, about any matter that came to his attention. True, if he wrote about things that he learned during his mad days with the Agency, his text would be reviewed before publication. But we're talking here about the crazy adventures he got up to after he formally left the Agency. 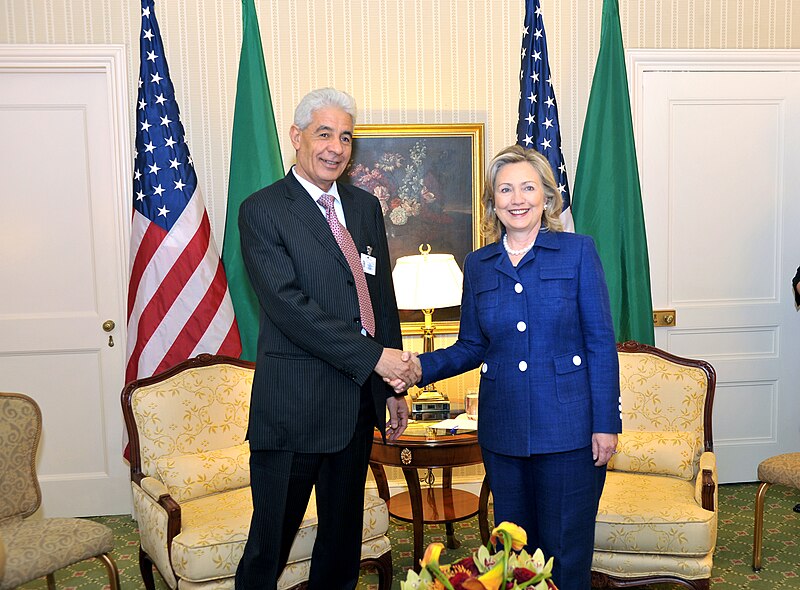 What about Koussa? As I've noted many times in the past, he was a foreign national, free to talk to whomever he pleased about anything he pleased. The CIA could classify information it received (directly or indirectly) from Koussa, but it did not control Koussa himself. I'm sure that he bellowed all sorts of data to all sorts of people. The United States simply did not control him. (The picture to your left shows Koussa meeting with none other than Hillary Clinton. He's a remarkable fellow whom we should discuss at length in a future post.)

What about Drumheller's pal at CIA? Wasn't that guy's name classified when Blumenthal sent those emails to Clinton?

If you are not taking a CIA paycheck, and a CIA guy named Joe Blow contacts you and asks "What do you know about Moussa Koussa?", you may speak freely. Joe Blow may request you to keep the conversation very hush-hush, but that request does not carry the force of law. You may legally gush to your friends: "Hey, guess what? I got a phone call from a CIA agent named Joe Blow! And here's what he and I chatted about..."

Security would have been breached only if a currently serving CIA officer spoke out of turn.

The FBI knows this, as do the "experts" interviewed for some of these stories about "emailgate." I believe that Anti-Clinton animus has compelled them to create the impression of a security breach where none existed.

How can I be so certain? Simple: Obama would already know if the FBI had acquired any damning information beyond what I've just outlined. And if Obama were so informed, he would now be taking a very different attitude toward Hillary's candidacy.

I'm afraid that Lord HAHA is basing all of his hopes and dreams on a complete misunderstanding of how classification works. Which is odd, since he has actually worked for one of this government's intelligence agencies. Perhaps it would be closer to the mark to suggest that he is misinforming the public.

By the way: Isn't it cute how the BernieBros -- the same people who claim that they want to "Bern" the whole corrupt system down -- are suddenly so very concerned about national security and proper classification procedures?

Bernie used to quote Che. It's pretty weird for him to start talking like Allen Dulles.


Over half of voters feel Clinton lacks the integrity to serve effectively as president (54 percent), and nearly 6-in-10 have an unfavorable opinion of her (56 percent).

Roughly one third of self-identified Democrats think Clinton is lying about her emails (35 percent) and put national security at risk (32 percent).

Twenty-seven percent of those backing Clinton over Republican Donald Trump in the presidential race think she’s lying about her emails.


These numbers have less to do with the actual story of "emailgate" (the details of which escape most people) than with the way the story has been covered. If the above argument were more widely disseminated, people would understand that "emailgate" is just another scheme to smear the Clintons. There have been so many others...

I'm not asking you to share the above post with all your friends, although that would be nice. A better course of action would be for you to comprehend the important points made here, and to speak up fearlessly in your own conversations and writings.
posted: 1:46 AM