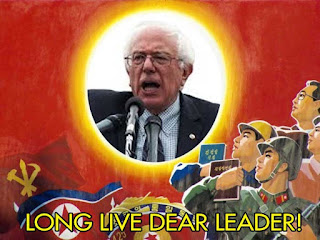 All over the internet, I see BernieBots lashing into Debbie Wasserman Schultz. In a sense, they are no longer running against Hillary: They are running against Debbie. What's more, the "Get Debbie" campaign is a top down affair. Dear Leader has given the order -- and his maniacal minions are now determined to kill kill kill.

A BernieBot's sense of outrage usually bears no relationship to reality. These clowns are so loopy, so caught up in their own fantasy world, they even consider MSNBC to be in the tank for Hillary -- even though the network is behaving toward her now the way Kos acted toward her in 2008. (For more on MSNBC, see blow.)

The favorite forum for young BernieBots is Twitter, which is designed to make ad hominem the primary form of argument. That's all they've got: Childish insults, baseless conspiracy theories, the automatic presumption of bad faith, racism, sexism, ageism, incessant lying and constant smears. In a word: Bullying.

The Chinese Cultural Revolution must have looked a lot like this.

So why does Dear Leader hate Debbie?


Sanders' campaign has long been critical of Wasserman Shultz's performance as head of the committee, claiming that the DNC has favored his presidential primary challenger, Hillary Clinton. Sanders and his supporters have complained about the nomination process and ways they believe it has helped Clinton, including debates held on Saturday nights, closed primaries in major states such as New York, and the use of superdelegates -- essentially free-agent party and union stalwarts who are overwhelmingly backing Clinton.

We can toss out the superdelegate claim on two grounds. First, it's hideously hypocritical: Bernie's whole argument for weeks has been an appeal for the supers to overturn the popular will.

Second, everyone knows that the supers would have turned on a dime (as in 2008) if Bernie had, in fact, won the popular vote. Which he did not.

(In fact, Hillary won the popular vote in 2008 -- and the supers still turned on her, based on rigged results from the caucus states. That fact alone tells you that the Establishment has always hated the Clintons.)

Similarly, we can toss out the complaint about debates on three grounds.

First: Most people feel that there were too many debates. No-one can claim that the debates flew under-the-radar. Absolutely no-one is saying: "You know what I wish? I wish that there had been many more debates between Hillary and Bernie Sanders. I just never got a chance to hear the guy out. To this day, I have no idea what he looks or sounds like."

Second: This isn't 1970. Modern technology makes it possible for anyone to watch the debates pretty much any time they want.

Third: The debates helped Hillary much more than they helped Sanders. She won the popular vote handily, and she did so despite having the mainstream, leftstream and rightstream media arrayed against her. (At the same time, the media refused to say one unkind word about Bernie). It has always been the case with the Clintons that they win only when they get a chance to speak to the people directly.

This level of anti-Debbie vitriol is not about something so trivial as debate scheduling. All of the other anti-Debbie arguments are similarly inane -- a series of red flags being waved in front of Bernie's bulls. (Note that Bernie refuses to mention caucuses, the real problem with our primaries.)

So what is this really about?

Bernie is using his newly acquired clout to engineer a change in the system -- a truly disastrous change. He wants the DNC to change its rules to allow Republicans to vote in Democratic primaries. Bernie Sanders wants to make it possible for Republicans to choose their opponents. 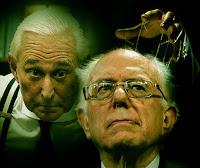 His goal reveals his true motivations (which are very different from his stated ones). What more evidence do you need for my "Stone controls Sanders" theory? The very thought of open Democratic primaries must make the perpetually priapic Roger Stone splurt all over his bespoke trousers.

A few have you have written to me privately, saying that my "Stone controls Sanders" theory will be proven only if Bernie goes third party. I believe that he will do just that, using some justification or other. (No matter how threadbare his rationale, his zombie minions will think whatever Dear Leader tells them to think.)

But even if he doesn't go third party, my "Stone controls Sanders" is proven by Bernie's call for open primaries. That is freakin' it, folks. No further evidence needed. We've got him.

Young and old. Whenever Roger Stone and his right-wing comrades gin up one of these Democratic splitter campaigns, they create fissures based on identity politics, usually black versus white. That's why Nixon's GEMSTONE plot involved secret Republican funding for Shirley Chisolm.

In this cycle, Stone has a new angle: Young versus Old.

This Matt Bruenig personage -- is he a "Stoner" or a legitimate dimwit? Doesn't matter. He has basically positioned himself as a left-wing version of Michael Savage, and thus should be treated like any other urine receptacle.

Everywhere I go on the internet now, I keep running into white college kids screaming that socialism is where it's at, and we old fogies just don't get it.

Wasn't it just three or four years ago when all these same young people suddenly discovered Ayn Rand? Arrogant young twerps everywhere were telling me to read Atlas Shrugged, a book which they presumed I never had heard of before.

I distinctly remember the fad. All sorts of smug white kids were reading John Galt's Big Speech and thinking: "Yes! Ayn is talking about....about ME! I AM THE SUPERMAN! And it is my heroic duty to stomp upon the small and crush the weak!"

Now these same young twerps are thinking they can take ME to school about Bernie Sanders, even though I met a dozen Bernies back at UCLA. (Assholes then; assholes now. Their arrogance did a lot to discredit the left.) Today, the worshipers of Dear Leader sneer at experience the way a fundamentalist sneers at evolution. But experience does have one great virtue: It teaches one to think beyond the latest fad.

The minions of Dear Leader, having heard the Word of Bern, know in their hearts that the entire country -- Kentucky, Alabama, Georgia, everywhere -- is yearning for the Great Socialist Revolution. Yes, the BernieBots have actually convinced themselves of this absurd hallucination.

In their teensy, pot-addled pseudominds, only two things stand in the way of Socialism's inevitable triumph: The Democratic party and the all-pervasive Evil Clinton Conspiracy. Both must be destroyed. Particularly the Democratic Party.

As I survey the minions of Dear Leader Bernie, I don't know how to differentiate the right-wing agitators from the naive young dupes. Maybe it's not necessary to make a distinction. One must argue from results, not from origin points; objectively speaking, they are ALL right-wing agitators.

A final word about the MSNBC Hillary-haters:
The worst offender is Mika Brzezinski, daughter of the hated Zbigniew -- Obama's mentor. Zbig was the original neocon, a supporter of Pol Pot, the true author of the Afghanistan invasion and the man who initiated the disastrous policy of fomenting jihad for larger strategic purposes.

("What's a few riled-up Muslims?" said he. One of the guys he riled up was named Osama Bin Laden.)

Ted Kennedy's whole 1980 campaign was primarily based on Democratic hatred for all things Brzensinski. The very mention of Zbig's name at the convention evinced a massive BOO. People forget that now.

And yet his daughter Mika -- who has never distanced herself from her father's evils -- gets paid a cool $2 million per year to spew her spew on a supposedly progressive network.

I'm hardly surprised to see Mika bash Hillary, any more than I am surprised to hear the same guff from Maureen Dowd, the woman who worked so tirelessly to get Dubya elected in 2000. One easy way to choose your candidate in a Democratic primary -- not just this year, but any year -- is to ask: Who does Maureen Dowd support? Who does Mika Brzenzinski support?