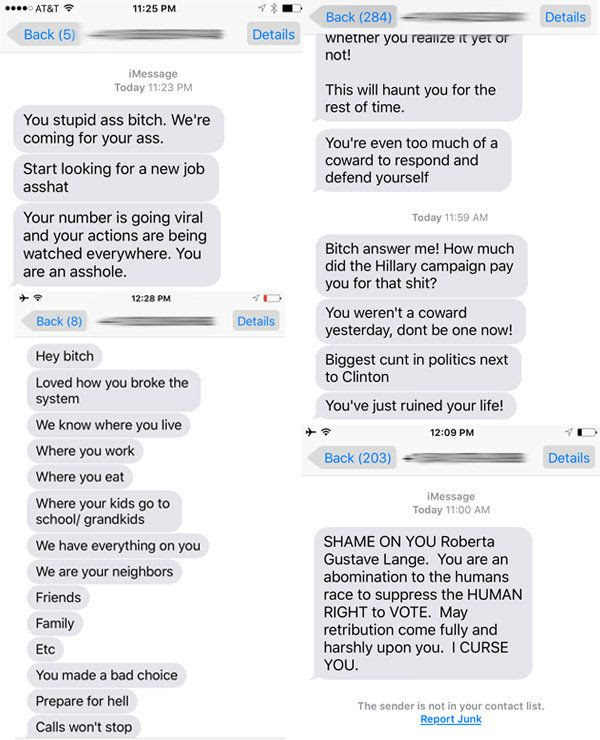 Above, you will see just a few of the thousands of messages sent by the Bernie zombies to Nevada Chairwoman Roberta Lange -- whose only "sin" was preventing the Sanders mobsters from breaking the rules and rigging the system.

The vile Sanders mob must now face the facts about what happened in Nevada. Despite the lying scenario published in Salon (a website run by a Goldman Sachs alum and owned by a hedge fund manager who will profit from a Trump win), the Sanders bots were completely in the wrong, while the Hillary campaign was totally innocent.

It's fair to ask: Why should I try to argue with anyone whose synapses have been fried by the Bern? It's like arguing with Creationists or global warming denialists: If you hit 'em with facts, they'll simply accuse you of being part of the Great Conspiracy.

Nevertheless, I must operate in the hope that there are some among the sickos who don't want to be sick any more. Here's your medicine, sickos:


It all comes down to simple math: 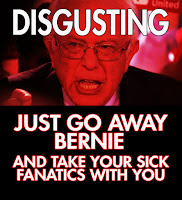 In plain terms, the Clinton campaign organized and got nearly all of their delegates to the State Convention. The Sanders campaign did not.

On the false and wildly inaccurate accusations that there were 64 potential Sanders delegates in question who were “denied” by the State Convention’s Credentials Committee on Saturday:

Six of the 64 potential delegates were seated as delegates after investigation.

The remaining potential delegates were ineligible for two main reasons: 1) They were not registered Democratic voters in Nevada by May 1, 2016, and 2) Their information — such as address, date of birth and name — could not be found or identified, and they did not respond to requests from the party and campaigns to correct it.

Only eight of the ineligible delegates even attempted to register at the State Convention.

The so-called “minority report” about these ineligible delegates was not written by the Credentials Committee — it was written by national Sanders campaign staff on site. A member of Sanders’ National Delegate Operations Team drafted and arranged for a member of that committee to attempt to deliver an incendiary report that caused chaos and violence at the convention. It was inaccurate, misleading and subsequently discredited by the Credentials Committee. 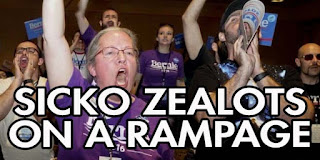 Will any of this penetrate the consciouness of the Sanders fanatics? No. They are the Borg. Arguably, they are worse than the Borg -- because they think they can think. In fact, the "thoughts" that they believe are their own have actually been pumped into their noggins by a bunch of propagandists paid for by Roger Stone and hedge fund billionaire Bill Hambrecht.

The backlash against Ms. Lange in Nevada echoes what happened in Colorado last month when supporters of Mr. Trump bombarded Steve House, the chairman of the State Republican Party, with complaints of disenfranchisement. He received thousands of calls after his cellphone number was disseminated online. 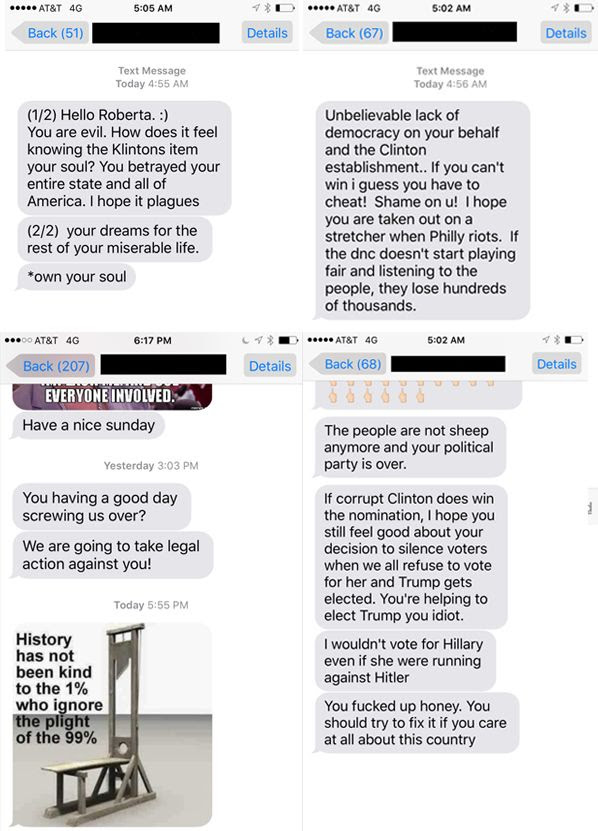 Supporters of Mr. Sanders used similar tactics to exert pressure on Ms. Lange, who has received more than 1,000 calls since Saturday night and as many as three text messages per minute. The threats, which came from men and women from across the country, were haunting and personal.

“Loved how you broke the system,” one person wrote in a text message that said he or she knew where Ms. Lange’s grandchildren went to school. “Prepare for hell. Calls won’t stop.”

Another person left a voice mail message saying he thought Ms. Lange should be “hung in public execution” for her actions.


If Bernie Sanders had any class, by now he would have called Ms. Lange and personally apologized to her for the sufferings inflicted by his zealot legions.

Sanders has no class. He just does not care. Look at this. The man is a total coward who refuses to confront his own responsibility.

The Bern-Brains think that they've been conspired against simply because the party wouldn't let them rig the system. It's part of a pattern: They routinely scream that the Great Clinton Conspiracy controls MSNBC every time they run a story that treats Hillary with basic fairness.

Look at what you've done, BernieBots.

LOOK AT YOURSELVES. Have the simple goddamned human decency to engage in just one small moment of self-reflection and self doubt.

Are you even capable of doubt at this point? Or have you been so warped by all of that anti-Clinton propaganda that you are no longer even recognizably human?

Maybe it is pointless to talk to you freaks. Fanatics are fanatics. They never change. They are not capable of even a half-second's worth of hesitation. They never say to themselves: "Wait a moment. Pause. Maybe we should think this through anew."

My Eye-talian blood comes to the fore at such moments -- and the fact that I've been listening to Verdi all day hasn't helped the situation. You know how we Italians are: With us, everything is grand opera. And vendetta: "Sì! Vendetta, tremenda vendetta!"

I do not want unity with the BernieBots. I want them dead.

I want those vile creatures tossed out of my goddamned party.

If Bernie wins the nomination I will work to oppose him.

I will do so even if Trump explicitly runs on a platform of Total Nuclear Apocalypse Just For The Hell Of It.

That's how much I hate Bernie Sanders.