Let's follow up on our previous post, which discusses the furor created by an anti-Hillary hit piece published by HuffPo, then quickly deleted. The case instantly became a cause celebre, widely discussed on the right. The author of that deleted article, Frank Huguenard, has aired his grievances on Breitbart.


“Huffpo has yet to respond to my request for an explanation,” Huguenard tweeted at this Breitbart News reporter Monday morning. “I’ve got my sources, they never asked.”

Huguenard later told Breitbart News, “I want to do another story but my HuffPo account has been temporarily disabled. Not sure what’s happening with them.”

I think I know why the thing was deleted: Huguenard is a liar. He falsely claimed that Hillary is being indicted because an official investigation revealed the Clinton Foundation to be a criminal enterprise.

Here is the actual wording:


James Comey and The FBI will present a recommendation to Loretta Lynch, Attorney General of the Department of Justice, that includes a cogent argument that the Clinton Foundation is an ongoing criminal enterprise engaged in money laundering and soliciting bribes in exchange for political, policy and legislative favors to individuals, corporations and even governments both foreign and domestic.

The truth: There is NO GODDAMNED INVESTIGATION OF THE CLINTON FOUNDATION and thus NO INDICTMENT.

Huguenard has no secret sources. If the DOJ were looking into the Clinton Foundation, would a little-known New Age whackadoodle find out before the New York Times or the AP or the Washington Post? If Huguenard has a source, why didn't he name that source in his HuffPo piece? Why didn't he offer a name to Breitbart?

Huguenard also said that less than 10 percent of the money donated to the Clinton Foundation has gone to charity. Basically, he wants us to believe that the Foundation is actually a Clinton family slush fund. But CharityWatch says that the figure is more like 89% (higher than the industry standard of 75%).

Frankie-poo is a deliberate and knowing liar.

Snopes tells us more about circumstances surrounding the publication of this article:


After the article vanished, rumors swirled that Huffington Post retracted it under pressure from the Clintons, the Democratic National Committee, or other entities with a possible interest in suppressing the information it contained. However, the archived version of the article contained the following caveat:


This post is hosted on the Huffington Post’s Contributor platform. Contributors control their own work and post freely to our site. If you need to flag this entry as abusive, send us an email.

Huguenaud published the item himself as a contributor to Huffington Post, where a disclaimer warned that information published through that platform is not vetted or official.

Crazy Frank. I've been looking into Frank Huguenard, who turns out to be a real piece of work. He's a big BernieBro -- no surprise there. Over the years, he has gained...well, let us call it a certain reputation.

Godlike Productions refers to him as "Crazy Frank." To be considered "crazy" by the standards prevailing on that site, you really have to go some.

But that's not the only online community which considers him insane. In fact, the nickname "Crazy Frank" seems to follow him wherever he goes in the world of "ultimate sports," where he has been a familiar presence. He doesn't like the nickname, and claims that his reputation as a nutcase was the result of an impersonation by an enemy.


I know he’s got some unusual ideas and ways of presenting them, and that he’s done and said some outlandish and maybe even offensive things. I’m not looking to speculate on who Frank really is.

But to label him crazy? To vilify and mock him? To suggest that he suffers from a mental illness and then ostracize him? That’s what we’re doing: ridiculing someone’s potential mental illness because we find it entertaining.

And that's from someone who likes him.

He has appeared on this radio program to spread his new-agey philosophy. Here is the illustration which accompanies that interview -- an image presumably created by Frankie-Poo himself. 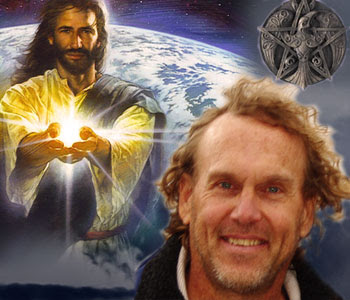 I think that this lovely bit of Photoshopping gives us a pretty clear idea as to how Frank sees himself.

The most delightful news is that Frank runs his own allegedly charitable foundation:


Apart from being founder and Executive Director of a non-profit humanitarian relief organization, The Bountiful Garden Foundation, Frank is also progenitor of Dischoops, the greatest team sport ever.

Is Huguenard's Foundation -- for which he does indeed solicit donations -- run on the up-and-up? Does it have any members not named Frank?

In his claims about the group, Huguenard contradicts himself. In the passage above (obviously taken from copy provided by Fearless Frank himself), the group is described as devoted to "humanitarian relief." That phrase conjures up certain images. Tireless workers in war-torn areas offering food and shelter to refugees. That sort of thing.

But when we go to the description of Bountiful Garden on the Guidestar website, we get a different story:


We provide humanitarian relief via the production and dissemination of self-empowering documentary films on the nature of human consciousness.

The English language is not Calvinball. Words have meanings. Asking people to fund an idiotic documentary about "consciousness" does not fall under any reasonable definition of "humanitarian relief."

Moreover, Huguenard makes money from the rental/sales of his films. Thus, he is asking people to donate money to his alleged "relief" organization so he can have fun playing with cameras.

I am not a lawyer. If you are a lawyer, I'd like to hear what you have to say about the legality of this situation.

We get a third description of what Bountiful Garden actually does on their website:


The Bountiful Garden Foundation was created in the early 2006 in the wake of Hurricane Wilma, Hurricane Katrina, Hurricane Rita and the Indonesian Tsunami. In a short span of less than six months, the planet experienced an unprecedented (in the modern era) amount of catastrophes and devastation.

BGF was created to help with humanitarian relief efforts in post-traumatic situations where donations could be funneled in to hard hit areas to help people cope by educating them in various bio-intensive physical activities and breathing techniques that have been scientifically proven to reduce stress and reduce PTSD.

The people hit hard by Katrina or the Indonesian Tsunami needed many things, but learning new "breathing techniques" was not high on the list. I strongly doubt that Team Huguenard swarmed into Louisiana after Katrina and taught the homeless masses how to reduce stress through proper breathing.

I invite you to take a closer look at the GuideStar page on Bountiful Garden. I think you will agree with my assessment -- that this "relief organization" shows all the signs of being a scam. Frank is the only listed member of the organization. When asked the usual questions about board composition, ethics, orientation, and oversight, Frankie provided no response whatsoever.

In fact, the Foundation seems to have no assets. I don't see how a group with no assets can claim to have gone to disaster areas to teach breathing exercises.

Huguenard appears to be either a nutcase or a flim-flammer. Or both. At any rate, this laughable fool has no business criticizing the Clinton Foundation or any other legitimate charity.

Normally, someone like Crazy Frank Huguenard would be granted no credibility whatsoever -- not even by the wackiest conspiracy-spotter websites. But now, Trumpians and Bernouts are treating him as a martyr to the Evil Clinton conspiracy.

Yet I couldn't get any traction on my story about an escort service called Trump International being run out of Trump Plaza at a time when the building was managed directly by Donald Trump. My facts are indisputable, and my evidence can be double-checked by anyone. My story does not rely on unnamed sources. That story continues to fly under the radar, while sites like Inquisitr pay respectful attention to the blatherings of Crazy Frank Huguenard.
posted: 1:34 AM