A lawyer claims that Bernie Sanders played a role in the demise of Burlington College -- and thereby broke Senate rules.

This post will give you the full details of that story. But first, let's look at a related item...

Sanders has undone the one lovable thing he did. I beamed when Sanders said that nobody cares about Hillary's "damn emails." Now, he tarnishes his reputation by taking it back.


Interviewed Friday on “Real Time with Bill Maher” on HBO, Sanders was asked if the furor over Clinton’s use of a private email server as secretary of state had become large enough for the Vermont senator to reconsider his refusal to engage Clinton on the issue.

“It has,” he said. “But this is what I also think: There is an enormous frustration on the part of the American people.”

Sanders is so desperate for a win in California that he hopes to convince people that a nothingburger contains actual beef. (As we shall see, Sanders himself is under federal scrutiny -- a fact which he hopes will go unnoticed by California's voters.)

Maniac time. If you click the above link, you'll be particularly stunned by the comments...


Hillary goes after Trump for saying he would be able to use a housing melt down to buy low but not even she claims Trump was the cause of the melt down. Her friend Barney Frank is as responsible as any one person for the problems with the housing market. He and other like minded dems were practically forcing people who could not afford a home loan to get one anyway.

Where do people come up with this crap?

I could not afford a home in the 2000-2008 period. At no point did Barney Frank contact me to say: "Cannon, I really must insist that you get a home loan. If you go another two months without locking yourself into a mortgage, I'll be very cross with you."

And then there are those lovely moments when the BernieBros come right out and admit that they hope to elect Trump... 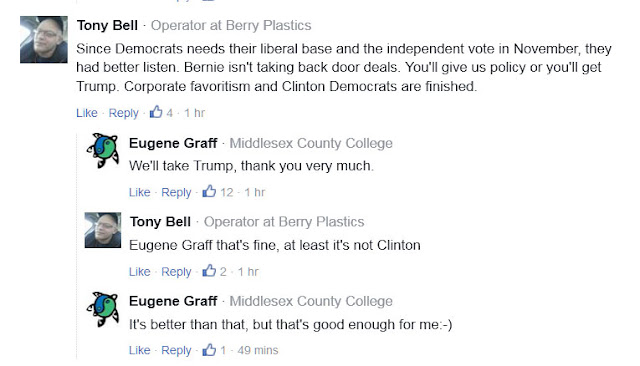 (As we've seen, Trump would certainly win if Sanders somehow attained the nomination.)

HERE'S THE BOMSHELL! We've seen Hillary's emails. We will soon see the documents in the court case involving Trump's fake university. But what about the documents that Bernie is hiding?

It turns out that we haven't been told the entire truth regarding the demise of Burlington College. If this letter from the law firm of diGenova and Toensing is on the level -- and I think it is -- then Bernie Sanders himself bears no small measure of responsibility for the downfall of that institution.

Moreover, his office seems to have behaved in a fashion contrary to the Senate's rules. He could face censure -- possibly even expulsion, although that is highly unlikely. (There have been only two expulsions in modern times: Both involved House members, not Senators, and both concerned charges of bribery.)

Below the asterisks, I will publish the body of the letter sent by attorney Brady C. Toensing to Bernie Sanders (with key sections boldfaced by me). I'll return with some further words after the letter.

This firm represents Wendy Wilton, an active Catholic and member of the Immaculate Heart of Mary parish in Rutland Vermont. On behalf of Ms. Wilton and other aggrieved Vermont parishioners, we request that your office publicly release all documents concerning Burlington College and you involvement with a loan application submitted by your wife, as President of Burlington College, to a federally-insured bank for a $10 million property transaction.

That transaction, which involved Burlington College's purchase of the Roman Catholic Diocese headquarters, not only led to the demise of the college but almost $2 million in losses to the Burlington Catholic Diocese. The college's recently announced, resulting insolvency will no doubt lead to further losses to the bank and losses to Vermont small businesses that provided services and goods to the school. Furthermore, the taxpayers of Vermont are likely to lose tens of thousands of dollars as a result of an outstanding, ill-advised and unsecured loan made by the Vermont Economic Development Authority (while your wife served as a paid member of its board) to Burlington College.

The current president of Burlington College said the "crushing weight of debt" brought on by this transaction, which was driven and designed by your wife prior to her firing, was the cause of its closure. Had the school stayed in its original location, as humble and inglorious as that was, it would still be here today serving its niche of students and the community.

Currently available evidence indicates that Burlington College failed because the privileged spouse of a powerful United States Senator received special treatment for a loan she should never have gotten for a property purchase that should never have been approved. Making matters worse, I was recently informed that your office contacted People's United Bank and pressured them to approve the loan application submitted by your wife.

Your campaign, which is partly led and orchestrated by your wife, has ironically and hypocritically made widespread mortgage fraud and its relation to the 2008 financial collapse the centerpiece of its campaign. You have also called on Secretary Hillary Clinton to release transcripts of her speeches to Wall Street firms, which you also blame for the collapse. Yet you cynically refuse to release your tax returns, which will presumably show you directly benefitted from the $200,000 Golden Parachute paid to your wife from a school that was in financial trouble due to her apparent loan fraud.

It is time to disclose these and all other documents related to this transaction, including your wife's Golden Parachute agreement, all communications your office had with People's United Bank, and all communications with VEDA, so that the full story behind this financial calamity is revealed. Vermont parishioners, Vermont citizens, and local vendors that are still owed money deserve to know the full story behind this improper transaction. Although you and the rest of Congress have exempted yourselves from having to produce public records in response to Freedom of Information Act requests, it is important that you release these documents and fully disclose your role in this transaction.

According to news reports, this matter is already the subject of an active federal investigation. Therefore any attempt to improperly influence witnesses or to destroy relevant evidence is prohibited by federal law. See 18 U.S.C. §§ 1512, 1517, and 1519. Additionally, you and members of your staff may be called as witnesses and be required to produce documents in litigation that will inevitably result from the collapse of Burlington College, its like bankruptcy (or insolvency), and attempts to recover losses.

Cannon here. For further background, see this story from last January in VTDigger.org


In loan documents from 2010, [Jane] Sanders overstated the pledged donations of at least two people listed as confirmed donors in a list of pledges used to secure a $6.7 million from People’s United Bank, according to a VTDigger investigation.

People’s United Bank has previously refused to comment on the loan, which was settled when the college sold the land to developer Eric Farrell.

Toensing writes in the complaint that it’s impossible to know how much money People’s United Bank lost on its loan (that information is not public), but ultimately that’s irrelevant, he says because federal banking laws don’t require that fraud materially impact the lending institution, only that the deception was intentional.


That was the state of play in January. I had no idea that the Senator himself had intervened with the bank until I had read Toensing's letter.