This post contains original information. I hope readers will do what they can to bring this matter before a wider public.

I never thought that the Sanders crowd would sink so low.

The Confluence was an extremely important site in 2008: That's where the PUMA movement started. The Republicans took careful note.

Now, someone has created a completely FAKE version of The Confluence -- a visual match for Riverdaughter's original, but with the text changed. Moreover, the BernieBots have somehow gamed Google so that links go to the fake page, not to the real site. (This has been confirmed for me by Prowlerzee, a longtime reader of this site.)

Text from the real site:


Bernie wants another debate before the California primary. If I were Clinton, I’d give it to him. What I think some voters want to see is an anti-Dukakis moment from Hillary. I think she can do this.

Finally, the left has to step up and make the Bernie Bros behave. Yes, it’s time to cut the sexist shit out and step up and do the right thing guys. These assholes are out of control. They think that they can use intimidation and breath holding and harrassment and everyone is going to give into them because they infiltrated caucuses and flipped some delegates in an backdoor strategy and generally made a nuisance of themselves.

Text from the fake site:


When Bernie talks about a revolution, he talks about a political revolution. But maybe we need the kind of revolution that destroys the Republocrat party. I loathe Trump and will not vote for him. But HillMonsterZilla doesn't give us anything worth voting for. I Hate them and their politics equally. So if Trump gets elected, then it's just the punishment the Democratic party and its minions like D.W.S deserve.

You should also check out Riverdaughter's contributions to the comments section on both the fake site and the real site. (I don't know what D.W.S. refers to. Any help...?) (Update: Debbie Wasserman Schultz. Sorry. Took me a minute.) 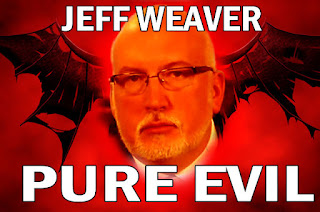 From one of my readers (quoted more fully below):


After that hack at the DNC by Sander's gang into Clinton’s database - I started getting spam from Sanders. That hack wasn't an accident - that was out of Stone's playbook.

Bernie Sanders is fully responsible for these dirty tricks. He knows damned well what is going on. As Josh Marshall wrote, the Bernie Sanders campaign is evil from the top down.

Sanders is the filthiest, sleaziest, most dishonest politician in America today. (Trump is not a politician -- yet.) 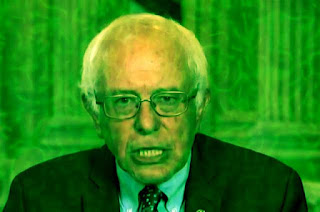 Sanders has pulled dirty trick after dirty trick -- and when he is caught with his pants down, he takes a page from the Roger Stone playbook and accuses Hillary Clinton of doing what he is actually doing. That's classic Stone: Attack attack attack, never defend, never apologize, always accuse others no matter what the state of the actual evidence.

Look at what Politifact has to say about the lies told by the BernieBots concerning Nevada. Everything you've heard from the Sanders supporters is total paranoid propaganda.

All across blogland, people who once liked Bernie are starting to vomit every time his ugly face shows up on TV. Nobody can accuse Kos or Josh Marshall of being blinkered Hillary fans -- we all recall how they treated her in 2008. Even Robert Reich is pissed off by the Bernie campaign.

Hell, I used to like Sanders. I gave him positive coverage when his campaign began -- and as some of you will recall, I was not at all happy with Hillary.

But right now, I won't vote Demcoratic if Sanders is on the ticket. I don't want him to speak at the convention. I want his sicko disgusting fanatical followers thrown out of the Democratic party. I'll vote for Charles Manson before I'll vote for Sanders.

I will contribute everything I can to anyone who opposes him in any future race. Even after this election is over, Sanders will be one of my main enemies -- Bernie and his crook wife will never be off my radar. 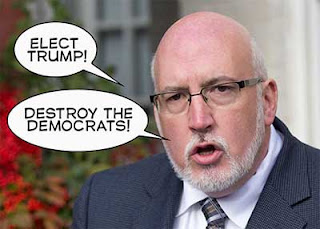 
It is now apparent that Sanders is only about his “Own Agenda”. He knows that after the Democratic National Convention in Philadelphia he will have used all his “POLITICAL VOICE” and will lose the respect and credibility he had with Democrats in the Senate and House. Sanders is now like the Bank Robber that has been caught inside the bank and is holding 10 million people hostage and threatening to shoot 1 every minute until you give in to his demands.


Okay, now we're getting into truly dangerous and delusional territory. Not only is the Sanders campaign perfectly willing to harm the Democratic nominee, but they aren't even thinking about the possibility that it might help elect Donald Trump instead.

Several described the campaign’s message as having devolved into a near-obsession with perceived conspiracies on the part of Mrs. Clinton’s allies.


There you have it. Our worst fears have been realized.

The Sanders campaign, once so proudly issue-based and high-minded, has officially devolved into an unintelligible, conspiracy-based, slash-and-burn fiasco of the highest order.

And somewhere else, Bernie doesn't seem to care.


Sanders has in the last three days essentially declared war on the institutional Democratic party, giving it an ultimatum to open up its doors to people who want 'real change'. Fair enough. But his entire stated strategy is to do well enough in the final run of primaries that super-delegates, the embodiment of the institutional party, decide to drop Clinton and switch their allegiance to Sanders.

That makes no sense.

You don't gain the acceptance or support of people whose very legitimacy you are currently attacking. You also don't gain trust by threatening a convention meltdown that these same people almost universally fear threatens to hand the election to Donald Trump. My point here isn't even about who's corrupt or 'for the people' or 'against the people' in Sanders' increasingly manichean worldview. It's just logic. You don't get party insiders to abandon their chosen candidate and embrace you by doing everything you can to demonstrate that you view them as your enemy.


Everything makes perfect sense if you allow yourself to think one forbidden thought: 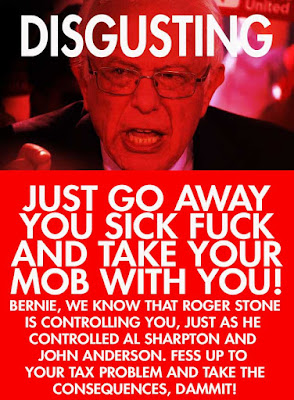 Bernie Sanders has something in his background (probably tax-related) that has rendered him susceptible to blackmail. Stone has manipulated other "progressives" in precisely this fashion.

Once you understand that simple concept, all mysteries disappear.

In 1980, "progressives" would have scoffed if you told them that John Anderson was controlled by Roger Stone. Yet we now know that this claim is provably true.

For forty years, Roger Stone has controlled nearly every "progressive" attempt to split the Democrats. Why should this election be any different?


The Democratic party and its Chicago convention were torn apart in 1968 over a fundamental cleavage over the Vietnam War. The Sanders camp is going to blow up the convention to push debate schedule reform? That's amazing. Reform of the primary process is a much more substantive matter. But remember, as I've argued before, the parts of the process most in need of reform (Caucuses and post-election day shenanigans) are the ones helping Sanders the most!

Precisely. I'm all for getting rid of caucuses. If we did that, Stone-controlled candidates like Sanders would have a much harder time of it. Sanders claims to want reform, but the aspect of the election that is most undemocratic -- caucuses -- are precisely what allowed him to be in his current position. Sanders claims to hate superdelegates, and then ties his entire strategy to them. As if he can woo them by threatening to destroy their party!


I’m not sure I’ve ever been more disappointed in a politician than I’ve become with Bernie Sanders. He was My Guy in the beginning. I really wanted him to be the real deal. I hoped for a year, that he would substitute sloganeering for actionable plans, and unfortunately I’m still waiting. As the months ticked by and his chances started to look noticeably slimmer, the tone shifted. It seemed to be impossible for Bernie and his supporters to accept that the majority of democratic voters simply did not have faith that he could accomplish all he was promising — The game MUST be rigged! Don’t get me started on the various conspiracy theories. If nothing else, Sanders and his fans have certainly kept the tin-foil manufacturers in business.

Sicko conspiracy theories are all that the BernieBots have to offer. But there is a real conspiracy at work here, and it comes down to one simple fact: Bernie Sanders is controlled by Roger Stone. That's why Bernie won't reveal his tax returns -- if we saw them, we would see what makes him so blackmailable.


I voted for Bernie Sanders. I even wrote about why I did here at this very shebeen. But if anybody thinks that, somehow, he is having the nomination "stolen" from him, they are idiots.

Finally, I'd like to offer the following from one of my readers, whose focus is on the psychology of mob violence:


The people at the top know exactly what they are doing. The mobs are not leader less - someone is directing the mobs - both the Trump and Bernie mobs.

Nixon's people sent agitators to the anti-war demonstrations on DC way back in Stone's early days of learning how to manipulate and probably blackmail behind the scenes. I'll bet he has some of the best hackers around.

After that hack at the DNC by Sander's gang into Clinton’s database - I started getting spam from Sanders. That hack wasn't an accident - that was out of Stone's playbook. Something evil is driving him.

I read over a hundred comments on Shakesville yesterday about Bernie's non response to the violence by his followers. A whole lot of comments picked up on Bernie's pushing his followers to violence - by lying to his followers. Just like any old cult leader does. Also mentioned was that claim by Bernie that his headquarters were shot at. Karl Rove planting a bug in his own office? Bernie seems to be working for Trump. I think that a lot of people recognize mob actions and violence.

Did you read the letter from the NV Democratic committee? The mob action sounded to me like it was organized. This was not spontaneous mob action, this sounded like an organized effort to force the delegate count in Sanders favor. Some of the mob psychology theory is coming back to me.

I wonder how Jung would explain this internet era of mob psychology? I think he would say to look at primitive human emotions. People are being manipulated. I don't think the collective unconscious is involved.

Wikipedia has a sketchy overview of mob psychology. Too many conflicting theories and not enough research.

A neighbor was living in Berlin during the rise of the Nazi party and the Brown shirts. She described the mobs breaking into homes (of Jews) and pulling books from the shelves. The illiterate idiots were looking for commie books. My friend had a book by Tolstoy on her shelves, along with her science and biology texts. The brownshirt mobs never saw the big red book. It survived and was shipped to the US when she and her Jewish husband escaped to the US just before WW II started. She described the behavior of spontaneous mobs and organized mobs. From Berlin she went to Harvard University to teach Biology. I learn a lot about mobs from listening to her talking about her life in Berlin.

You are right to be concerned about mobs. I hope that the Democratic Party will be prepared for Bernie mobs in Philadelphia. NV was the warning.