The video above depicts an object (presumably a missile) that looks exactly like the one seen over the skies of California on the seventh of this month. However, this footage was taken in China, in 2010. The similarities are eerie: This missile also flew over an airport, in Hangzhou. And (for what it is worth) the test took place on the seventh of July.

The above video also depicts a rocket or missile flying over an airport -- specifically Miami Airport on September 2 of this year. There are quite a few videos of this event (another one is embedded below), which -- we are told -- was caused by an Atlas V rocket launched from Cape Canaveral.

I can't easily buy that explanation. The Atlas V has been around for quite a few years, but I've never before seen photos or videos resembling the sights seen here. The Miami event strongly resembles the Hangzhou head-scratcher and the California conundrum, yet those other two incidents do not involve an Atlas V rocket. The California missile was launched, apparently, from the sea. (For purposes of comparison, I will embed another view of the California display at the bottom of this post.) 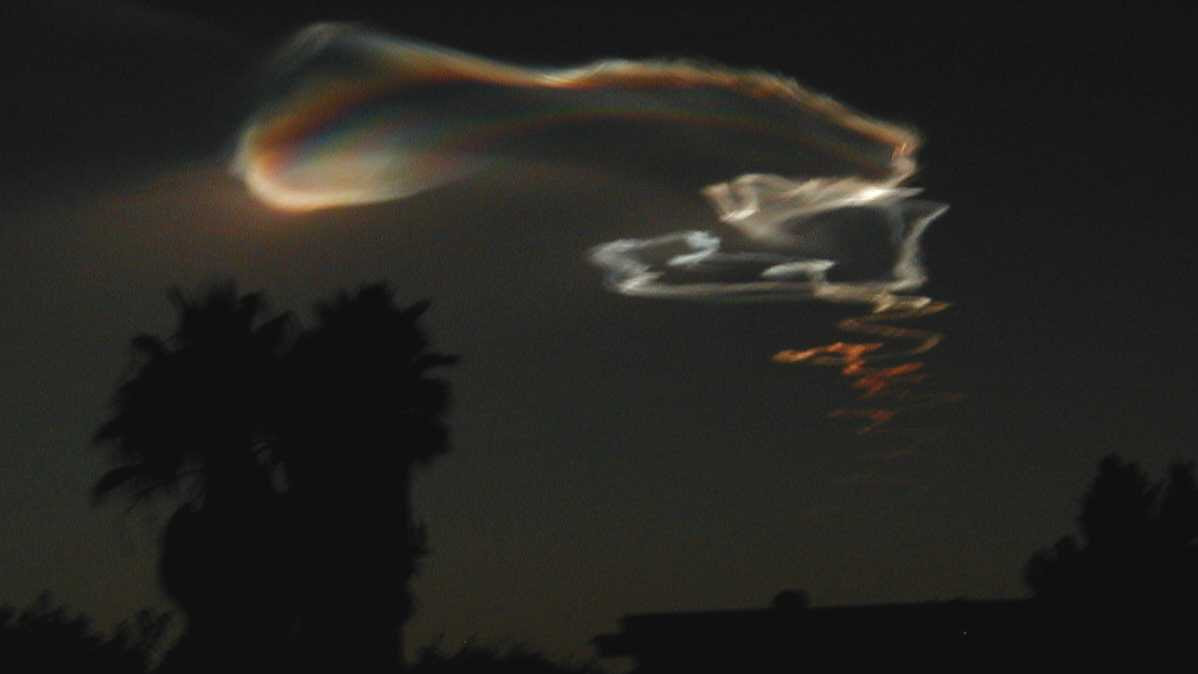 As noted in the previous post: While growing up, I often saw missiles taking off from Vandenburg AFB -- and so did just about everyone else who lived in that part of the Golden State. If conditions were just right, the trails in the sky could be quite spectacular. But those displays of yore looked nothing like the November 7 event. (The photo to your right depicts the kind of "missile trails" that southern Californians would see from time to time.)

More importantly: The public was told about those tests, both before and after.

Is it purely coincidental that the three recent events in Hangzhao, Miami and Los Angeles occurred in proximity to busy airports? Why was air traffic coming out of LAX re-routed? What was so freakin' important about conducting a test there and nowhere else? Why conduct such a test over one of the most populated areas of the world, without giving the public any kind of advance warning?

Why does the Chinese missile seem to "explode" (or pulse) -- then keep going?

Here's one witness description of the California missile:


The streaking light looked like it was about to fizzle out and disappear, and suddenly after it had been streaking through the sky for over 2 and a half minutes, it seemed as though it "exploded" and began to emit a bright blueish-green light. At this point many people around us had felt as if it was unsafe to stay, and the parking lot cleared out fast. This expanding bright light soon expanded to fill a large amount of the sky before it began to disappear.

One photo of the California missile shows glowing debris plummeting to the ground.

Don't misunderstand: I have no doubt that all three of these objects were missiles of some kind. But I also am quite certain that we have not been told the full story.

Added note: It has been claimed that the California missile was launched from Point Mugu, a Navy weapons base located near a striking rock formation some 42 miles southwest of LAX. I cannot recall a single previous occasion when a Point Mugu test affected the usual running of the airport. Yet the Navy would have us believe that this event was routine.

Here's a comment from an eyewitness that originally appeared on Zero Hedge:


However, I can tell you from seeing it first hand, no way under the sun, moon in heaven or hell.

Like, it floated, lingered and didn't even transit the entire horizon, and was going slower than an airliner. So if it was a missile it appeared from out of nowhere, disappeared into nowhere and would have taken over 8 hours to make it from LA to Moscow.

Another thing was that it was sighted all the way from San Diego to LA to SF as well as had Twitter etc, all abuzz about it from Colorado, Nevada and Arizona. NFW a missile is seen that far. And was way too bright. Plus a missile plume does not radiate at 45 degrees ...

Way too may Not possible to have physically been a missile.

Also, the "story" has been through several iterations. It was said to have been launched from Point Mugu, Edwards AFB, Vandenburg AFB and somewhere else I don't remember at the moment.... Which are all land based/USAF. Then the Navy said it was a test from a nuke sub, a Trident D-II series missile.

So the story doesn't even hold.

Then if it was a missile test, it would not have been launched from SoCal up along the coast toward NorCal. Too dangerous. Even unarmed (like they test fire armed ones... no) if it crashed on land it could kill people.

The Navy and AF shoot their tests out over the ocean away from land into the far reaches of the Pacific. In fact, the Navy test ranges have launching facilities/areas out in the South Pacific atolls.

So the test is a fallacy.


I say it is a missile -- but the situation is hardly normal. Another eyewitness report from Zero Hedge:


Was doing some bouldering yesterday and camped at a place near pleasant valley damn near Bishop, CA. While having a brew and getting te fire going, I watched this thing cruise north along the Mt. Whitney range area all the way to Mt. Tom where it did a literally 90 again. A minute later I saw what appeard to be a 1st or 2nd stage booster come off, the missile lagged a moment, then pointed upward again. Another minute or so it looked like another stage dropped then the thing didnt rise but just cruised paralell along the sierra nevada mtn range. Normallt 'they' test missiles over the pacific, why the fuck did they do this one different?