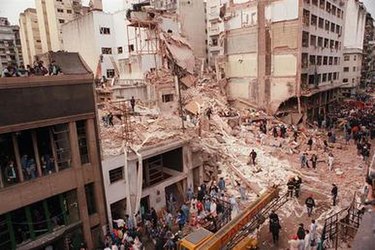 Was Iran responsible for the infamous 1994 attack on a Jewish Community Center in Argentina? That's the story we've been told for a couple of decades. That's the story recently accepted as a given in a New Yorker piece by Dexter Filkins, published on July 4 of this year.

Journalist Gareth Porter, writing for FAIR, has called into question all of our conventional ideas about that event. Not for the first or last time, our media became wedded to a narrative constructed out of lies and half-lies.

Over the years, we have been repeatedly told that the decision to bomb the center was made at the highest levels of the Iranian power structure. It is said that the Iranians became miffed at the Argentinians over a contract dispute involving nuclear technology.

But how do we know this? Did the NSA find some damning signals intelligence? Did our CIA sneak important documents out of Iran?

That's a problem right there: Defectors have a tendency to say whatever they think their new hosts want to hear. They also tend to tell hair-raising stories which help war-mongers justify their bellicose schemes. Remember "Curveball"? Remember Anatoly Golitsyn?

But in this case, the situation is even worse.

The bombing of the Jewish Center was investigated by Argentine prosecutor Alberto Nisman. Most American journalists have never read his report; if they had, they would know that key information came not from "defectors" but from members of MEK, a terrorist organization.


The MEK, an armed opposition group, had been a terrorist arm of the Saddam Hussein regime during the Iran/Iraq War, and had carried out terrorist actions against Americans and Iranians in the 1980s and early 1990s. It was taken off the State Department’s list of terrorist organizations in 2012 after a well-funded campaign to buy off prominent political and national security figures.

Let's be blunt: MEK is run by maniacs, and everyone knows it.

From an earlier Porter piece:


“The fact that the individuals are opponents of the Iranian regime does not detract in the least from the significance of their statements,” Nisman declared.


The record of MEK officials over the years, however, has been one of putting out one communiqué after another that contained information about alleged covert Iranian work on nuclear, chemical and biological weapons, nearly all of which turned out to be false when they were investigated by the International Atomic Energy Agency (IAEA).

In other words, much of the case against Iran rests on the word of terrorists with a history of hoaxing.

Perhaps the key witness was a former Iranian spook named Abolghasem Mesbahi, who defected to Germany. Not a very credible guy: The CIA pegged him as a "serial fabricator."

He has a bad habit of telling contradictory stories: At one point, Mesbahi said that corrupt Argentinian police officials were involved, while at another point he insisted that no Argentinian assets played a role. He also falsely claimed that the Iranians paid Argentine President Carlos Menem $10 million to make a public statement absolving Iran.

He also told a tale "proving" that Iran was behind the Lockerbie bombing. Whenever it's time to whip up anti-Iran hysteria, our media (and Al-Jazeera) puts Mesbahi in front of a camera and asks him to recite his tale -- or rather, his latest version thereof. The people who point cameras at Mesbahi never tell you that the CIA does not find him believable.


Even more outrageously, he had also concocted a tale of having been tipped off by Iranian contacts, through a series of “coded messages” in the summer and early September of 2001, about plans for a coming Iranian terrorist strike in the United States that would involve crashing civilian airliners into buildings in major US cities, including Washington and New York, on September 11–and that he had frantically tried to contact someone in German or US intelligence about the information. In fact, neither the German nor US government ever got any communication from Mesbahi.

Neocons have always loved the theory that the Iranians "ran" Al Qaeda, even though the very idea is ludicrous. Al Qaeda is composed of fanatical Sunnis who consider the Shiites of Iran to be heretics. Right now, Al Qaeda forces and Iranian fighters are killing each other in Syria.

And that's it, folks. That's the best evidence of Iranian involvement in the Buenos Aires disaster.

That's the kind of "evidence" our media considers acceptable, as long as the finger of blame points to some entity that our government doesn't want you to like.

Before you ask: No, I do not know the real perpetrator of that bombing. As far as I know, the killers could have been Argentinians or Palestinians or Iranians or Americans or Brits or leprechauns. Maybe it was the last hurrah of a very elderly Adolf Hitler. I'm not here to sell you on an alternative theory.

My purpose here is to reiterate one simple belief: Our received truths should be based on evidence, not on political biases or Machiavellian manipulation.
posted: 5:09 AM