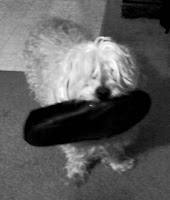 As regular readers know, we lost our beloved dog Bella (pictured to your right) in March of this year -- on National Puppy Day. We still put a flower on her grave every day. For more than ten years, she functioned as this blog's mascot. For more than fifteen years, she was my best friend.

Such a friend is, of course, irreplaceable. Yet happy circumstances have given this blog a new mascot -- an eleven year-old rat terrier named George (pictured below). His previous owner was forced to give him up. Since senior dogs are not easy to place, he was in danger of the pound.

When we found out about George's predicament, we were overjoyed to take him on board. He is one of the great canines -- quiet, intelligent, well-trained. Despite being a bit large for his breed, he still has the vim and vigor of a dog half his age. I have to admit that it was a little difficult to get used to a dog who bears so little resemblance to Bella -- and no doubt George found it hard to get used to us. But when he found out that we have a very lenient "human food" policy, he adapted to his new family rapidly.

Incidentally, the term "rat terrier" appears to have been coined by none other than Teddy Roosevelt. Just such a terrier lived at the White House during TR's time, ridding the presidential mansion of a seemingly intractable rat problem. There are those who say that rats returned to the White House after TR moved out. If these reports are true, Mr. Obama is free to borrow my dog -- as long as he promises not to eat my dog.

Speaking of fine dining: George now begs to be fed roughly twice an hour, in furtherance of his newfound ambition to become the fattest pet in all of Maryland. He is particularly fond of ravioli. This picture may be considered his "before" photo... 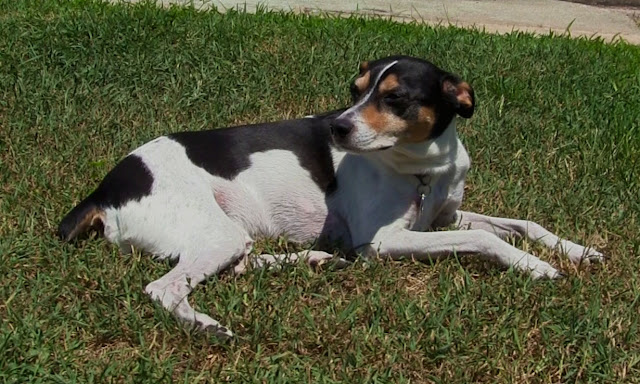