We live in a strange age. Both liberals and right-wingers want to constrain the boundaries of debate on climate change. Both sides censor, both sides accuse the other of censorship, yet neither side considers itself capable of censorship.

Many right-wingers insist that man-made climate change is a myth. Fox News and other right-wing media outlets censor anyone who says climate change is not a myth -- in other words, they censor the viewpoint held by the vast majority of the world's scientists. Conservatives think that these scientists are engaged in conspiracy to (in the words of The Heartland Institute) "socialize the world."

That view is, in my opinion, hogwash. Anyone who wants to propagate that form of hogwash should feel free to do so on some other blog. It's a big internet, and you have no shortage of places to express yourself.

Am I being a censor? Yep. My personal censorship gene kicks in whenever I'm asked to deal with arguments that have been made a zillion times before. (That's why this blog never discusses abortion. We'll talk about it when someone comes up with something new to say.)

As my own example proves, liberals censor too. I freely admit it. And I freely admit that this urge to purge unpleasing ideas has genuine dangers. To be specific, I'm increasingly ticked off at those liberals who seek to stifle any attempt to discuss geoengineering.

In my own characteristically oddball fashion, I tried to initiate a debate on geoengineering in a previous Cannonfire post. I suggested using the fabled substance Pykrete -- ice impregnated with a small amount of wood pulp -- to reduce the melting of Arctic ice. Pykrete can "make itself" if wood pulp is introduced into a suitable environment.

I can't deny that the whole concept of using Pykrete to slow glacial melting is kind of weird. Members of the Better-Science-Through-Smirkiness battalions like to remind everyone that Pykrete turned out to be impractical for its intended original purpose of constructing unsinkable aircraft carriers. That objection would make sense if we were still talking about boats. But we're not. We're talking about glaciers.

(Incidentally, WWII-era "boffins" did much more detailed work on the proposed Pykrete supership than I had previously known, as this pdf of a scientific article from 1948 reveals. The same article notes that the concept of mixing wood pulp and ice originated not with the lovably eccentric Geoffrey Pyke but with "Mark and Hohenstein, working at the Brooklyn Polytechnic." I don't know who they were, but they probably weren't lovably eccentric.)

I'm not the only person to proffer the seemingly-wacky idea of layering the leading edge of a glacier with Pykrete. See here, for example.

In 2012, well after my own humble offering appeared, a participant in the TED forums asked if we could "Pykrete a Glacier." The following paragraph deserves your most respectful attention:


America’s fastest growing glacier, Crater glacier in Mount St. Helen’s crater, is well on its way to being the lower 48’s largest glacier, and even though none of the ice pre-dates 1980, at its thickest point its over 600 feet deep. It is advancing at a rate of 50 ft a year and thickening 15 feet per year. Most of the glacier is below the average height for glaciers in Washington State, so why is it growing? Rock slides and ash. They are acting just like sawdust in Pykrete, insulating the ice and keeping it from melting.

Perhaps my "wacky" idea isn't so very wacky. We already have a large-scale working model.

That said, you may be able to raise a perfectly valid scientific objection to the pro-Pykrete position. That's fine. I look forward to hearing your counter-arguments.

To a certain kind of liberal, virtue requires forcing everyone on the planet to adopt a non-modern lifestyle. You cannot be virtuous unless you live off-the-grid, perhaps in a cave, eating only food grown in your personal garden. Virtue demands that you no longer use computers or air conditioning or television or cell phones or non-holistic medicine. Until such time as someone invents an automobile constructed entirely of rocks and wood, powered purely by smirking self-regard, the only permissible form of transportation is the bicycle. A bicycle made of wood.

Misery will always remain unpopular with the vast majority of the human race. For this reason, nothing will ever be done about climate change.

A disastrous outcome does not bother "Whole Foods" liberals, since they prefer smugness to life itself. Apocalypse is a small price to pay to maintain their beatific vision of Ultimate Virtuousness.

(One encounters a similar problem when discussing diet. Certain high-minded pursuers of The Virtuous Life insist that the only permissible diet is one which completely divorces the concepts of eating and pleasure. Thus, all talk of the 5:2 intermittent fast diet is Thoughtcrime Most Foul: "Wait. You're talking about a plan in which people can eat whatever they wish during five days of the week? No! Don't even think about it! Whether or not the diet works is irrelevant. One must not derive pleasure from food: That is the LAW.")

Let's take another look at the above-linked TED Forum mini-discussion on giving glaciers a Pykrete makeover. Look at the comments: Most of the responses are infuriatingly irrelevant. People seem desperate to talk about anything other than the topic at hand. Instead of telling us "Pykrete won't work, and here's why..." (or "Pykrete WILL work, and here's why..."), the commenters insist on spewing out crap like this:


I do not share the view that we are the reason for this change or that we should commit resources in an attempt to alter the natural course of our planets systems to serve human population centers instead of over time relocating said populations to meet the changing face of Earth's geology and environment.

I do agree however, to a certain point that we should definitely be slowing our species growth and we should be moving some of our populace centers.

First I have ask what is the perceived "problem" with the melt-off of the glaciers? In other words why do we need to do anything about it?

And so on. It's all blather. It's all off-topic blather.

Why are so many people desperate to talk about anything other than the scientific question of "Will it work"? What psychological malady compels these people to have such a phobic reaction to any idea that involves geoengineering?

I still believe that Pykrete, or some variant thereof, may help to impede the melting of Arctic ice. Lord knows we need to do something: The Arctic "melt-down" not only kills walruses, it reveals dark oceanic water, which absorbs sunlight and accelerates global warming.

Maybe my idea will turn out to be as off-the-wall as anything Pyke ever proposed. That's quite possible.

Still, there are other people -- genuine scientists, with degrees and thick glasses and D&D dice and all the other accoutrements -- who have come up with other plans which involve large-scale geoengineering. Some of those plans sound pretty interesting to me.

Guess what? You aren't allowed to talk about those ideas.

Above, I've embedded a TED talk by David Keith. Keith suggests that we may want to inject large clouds of ash into the atmosphere in order to decrease sunlight. Good idea or bad idea? We may never know, because Keith's proposal is not a permissible topic of discussion.

His suggestion annoys the Virtuecrats, who insist that we may debate only those ideas which increase misery.

Of course, they don't actually use the word "misery." They prefer code-phrases -- usually something about "altering our lifestyles." But what they really want is misery. 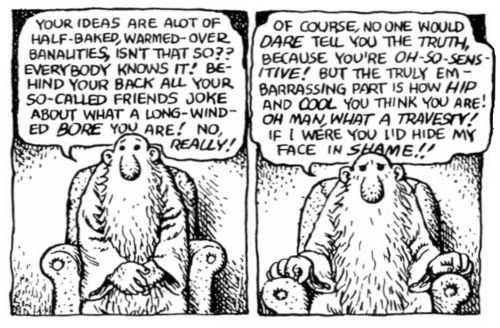 I'm a liberal myself -- always will be -- and I've known since the 1970s that the instinct to censor is just as big a problem in Liberal-land as it is among the fundamentalist religionists. True, liberals prefer to censor different kinds of things. Many liberals don't mind looking at pictures of people fucking, and most of us don't get upset at a blogger who spells out the word "fucking" without asterisks. But God help you if you dare to spell the word "nigger" without asterisks, even when you are quoting a racist in order to demonstrate how despicable racism is. Many liberals applauded when a major corporation fired someone simply because he supported California's Proposition 8 back in 2008. Liberals consider it permissible to condemn celibacy in the Catholic Church and impermissible to condemn celibacy in Tibetan Buddhism. (Asian religion has a built-in Grooviness Exemption.) Bill Maher recently discovered that his audience will accept criticism of Christianity more readily than criticism of Islam. One could cite many further examples.

As noted above, I myself practice censorship, albeit reluctantly. I am particularly keen to deep-six any comments from conspiratorial freakazoids who love to spew nonsense about 9/11 and those alleged "bombs in the buildings." Take away the fetters, and said freakazoids will soon transform any website into a place that non-freakazoids can't bear to visit. I learned that lesson the hard way.

Organized mass comment spam is itself a form of censorship. Trolls force one to censor or be censored.

So let us concede that a certain amount of censorship may be inevitable, perhaps even desirable.

But when it comes to the all-important topic of climate change, censorship kills. If we disallow all discussion of radical new ideas, censorship may become a destroyer of worlds.
posted: 7:24 AM