First and foremost: I know how a few of you will react to this post's headline. Look at the "Rules for comments." See rule 2? You have the rest of the internet in which to romp and scamper. I don't want to hear a single goddamned PHONEME out of you.

Salon has published a piece by Patrick L. Smith on the war against ISIS, and why it probably won't work. Smith's piece begins thus:


In history there are the Punic Wars and the Opium Wars, each a turning point, and now we must talk of our Iraq Wars. As of this week they count three since George Bush the Elder cynically drew Saddam Hussein into invading Kuwait 23 years ago.

Meanwhile, in the Daily Beast, Michael Tomasky argues that this Iraq war is morally superior to the one that started in 2003.


The first and most important difference, plainly and simply: Obama didn’t lie us into this war.

If you're older than (say) 22, you'll recall how things were back then. Anyone who said that the administration lied us into war was accused of being a paranoid conspiracy theorist -- or of being a paid agent of Saddam Hussein. (Come to think of it, the second accusation was itself a conspiracy theory.)

The neener factor means that right now, in 2014, you had damned well better think twice before accusing me of being a paranoid conspiracy theorist. I'm here to tell you that Tomasky has it all wrong: This Iraq war, like the last Iraq war, was predicated on a series of falsehoods. An earlier post listed five of those fibs:

Myth number one: There are "moderates" in the anti-Assad coalition whom we can train and equip to fight both Assad and ISIS.

Myth number three: ISIS had no state backing from Saudi Arabia, Qatar and other American allies.

Myth Number four: Obama can destroy both ISIS and Assad.

Bob Parry, formerly of Newsweek and lately of The Consortium, goes further. Although many will dismiss his explanation of events as a paranoid conspiracy theory, I think that his viewpoint will one day be considered conventional wisdom.

Here is his bottom line (emphases added by me):


For the past several years, the Israeli government also has sought the overthrow of Assad, even at the risk of Islamic extremists gaining power. The Israeli thinking had been that Assad, as an ally of Iran, represented a greater threat to Israel because his government was at the center of the so-called Shiite crescent reaching from Tehran through Damascus to Beirut and southern Lebanon, the base for Hezbollah.

The thinking was that if Assad’s government could be pulled down, Iran and Hezbollah – two of Israel’s principal “enemies” – would be badly damaged. A year ago, then-Israeli Ambassador to the United States Michael Oren articulated this geopolitical position in an interview with the Jerusalem Post.

“The greatest danger to Israel is by the strategic arc that extends from Tehran, to Damascus to Beirut. And we saw the Assad regime as the keystone in that arc,” Oren said. “We always wanted Bashar Assad to go, we always preferred the bad guys who weren’t backed by Iran to the bad guys who were backed by Iran.” He said this was the case even if the other “bad guys” were affiliated with al-Qaeda.


According to Parry, Israel now understands that this strategy was an incredibly foolish blunder, and that sharing a border with Assad might indeed be preferable to sharing a border with the kind of people who think highly of Nusra or ISIS. A fair amount of evidence does indeed suggest that the Israelis, the neocons and the Obama administration have had a (very belated) change of heart regarding the usefulness of the jihadis.

But, hey -- no problem. It's not as though Israel has to clean up this mess. That's what we're for.

Parry made a very similar argument in an earlier article:


The neocon vision got knocked off track when Bush’s Iraq War derailed and the American people balked at the idea of extending the conflict to Syria and Iran.

But the neocons never gave up on their vision. They simply kept at it, clinging to key positions inside Official Washington and recruiting “liberal interventionists” to the “regime change” cause. The neocons remained focused on Syria and Iran with hopes of getting U.S. bombing campaigns going against both countries. [See Consortiumnews.com’s “The Dangerous Neocon-R2P Alliance.”]

The neocons’ new hope has now arrived with the public outrage over ISIS’s atrocities. Yet, while pushing to get this new war going, the neocons have downplayed their “regime change” agenda, getting Obama to agree only to extend his anti-ISIS bombing campaign from Iraq into Syria. But “regime change” in Damascus has remained a top neocon priority.


Parry wrote those words roughly two weeks ago. He now seems to think that things have changed.

If Parry's most recent piece is right -- if there has indeed been a belated recognition that arming the jihadis was a massive error -- must I now revise myth number five? In other words, will the fake war against ISIS morph into an actual war against ISIS? Will Obama form a sub rosa alliance with Assad and/or Iran?

Frankly, I'm not sure. As you mull over that problem, you may want to check out the argument offered by Syrian Girl in the video above. She seems to think that Assad remains the real target.

Ostrovsky called the shot. If you want to read something truly prescient, check out Victor Ostrovksy's remarkable 1994 book The Other Side of Deception. (I never took much interest in Mossad until I read his two books.) From page 197:


Supporting the radical elements of Muslim fundamentalism sat well with the Mossad's general plan for the region. An Arab world run by fundamentalists would not be a party to any negotiations with the West, thus leaving Israel again as the only democratic, rational country in the region. And if the Mossad could arrange for the Hamas (Palestinian fundamentalists) to take over the Palestinian streets from the PLO, then the picture would be complete.

Ostrovsky goes on to state that "Mossad began trying to undermine the fiber of Egyptian society by supporting the fundamentalists, also under false flag..."

If you're into predictive spy literature, you may also be intrigued by page 117 of the same book, partially reproduced below. "Ephraim" is Ephraim Halevy, who became the head of Mossad after the events chronicled in this book. (Actually, Ostrovsky never divulges the man's full name in this volume. Trust me: It's Halevy.) As you scan these words, keep in mind: This book was published in 1994. 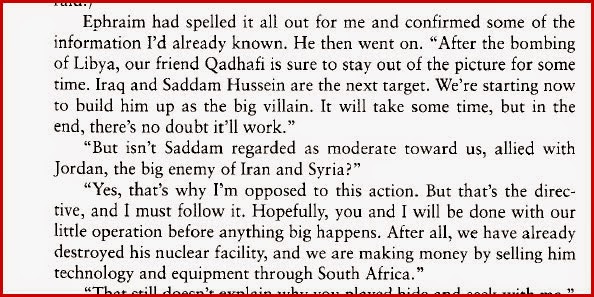 Despite the headline of this post, I must admit that not every conspiracy theory has any basis in reality. Frankly, most such theories turn out to be ridiculous -- even dangerous. You must now be wondering: Is there a simple way to determine which theories are valid and which are silly?

Sure! Just read this blog. The theories I endorse are possibly valid. The ones I do not endorse are probably silly.