Who says America is a divided nation? A tweet from someone named Layla Dhere sums up the media's reaction to Obama's speech about ISIS:

Hate springs eternal. Despite my many anxieties about Obama's Big Speech, I have to confess that his critics on the right can be even more terrifying. Tonight, I received the following message from a professional Islamophobe named Tricia Ericson (a "media consultant" who also whoops up hatred against Mormons):


In his speech tonight, Obama said "Isis is not Islamic; No religion condones killing innocents" - Who does he think he's fooling and why?

In the body of her message, she consistently misspells ISIL as ISLE. Is she merely a dolt, or is she writing in some sort of code?


Let's face the fact that Obama was raised mostly as a Muslim, and I believe that he is more a Muslim than what he claims to be, a Christian, for political purposes.

Obama knows that Islam is based on the Koran. ISLE is following their religion perfectly by the maiming and beheading of innocents...

No need to go on, methinks. This woman makes a good living spewing nonsense to an audience of fundamentalist Christian rubes. Alas, she'll never understand that the only reason any liberals still support Obama is that we don't want to grant any victories to repulsive far-right kooks like Tricia Ericson. The President is fortunate in his enemies.

The range of permissible discourse in this country has narrowed. I've been around for a while, and I can't recall a time when the major media have been this controlled.

For the first time in my life, no representatives of the Palestinians are ever allowed near an American TV camera or microphone. (In the old days, Ted Koppel would let the Palestinian viewpoint to be heard on his show every so often.) Teevee talking heads are not allowed to criticize outright censorship on our campuses. On the eve of this new war in the Middle East, our journalists refuse to disclose the somewhat relevant fact that our previous war killed 3.3 million Muslims. (That's more than half the body count of the Holocaust. Yet the Tricia Ericsons of this country say that Muslims are natural born killers...!) 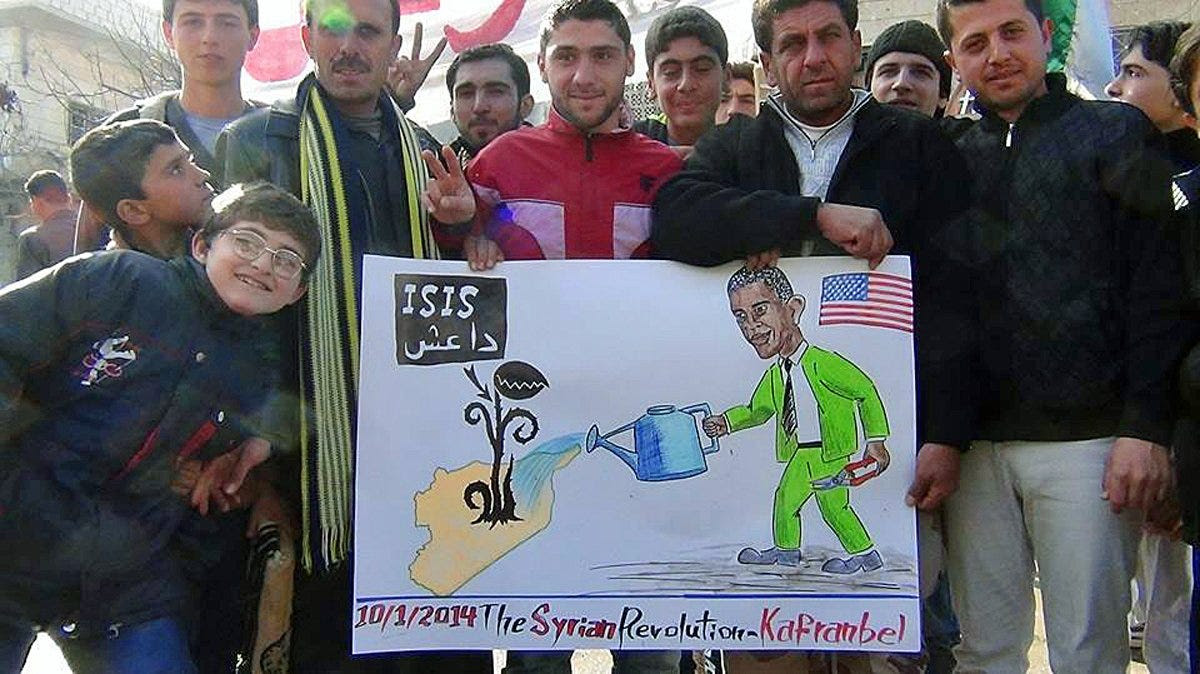 No mainstream opinion-shaper is permitted to state the most important, most obvious truth that all Americans need to hear:


ISIS is a creation of the United States. It arose out of the destruction of Iraqi society by the US military between 2003 and 2011 and the colonialist policy pursued by Washington of whipping up sectarian warfare between Sunnis and Shiites.

The war on ISIS is camouflage for an unstated agenda. The United States is using military force to attempt once again to restructure Iraq in line with the aims of its 1991 war and its 2003 invasion—complete domination of the country’s vast oil resources.

Even more centrally, the new war is aimed at overthrowing Assad in Syria.

Those words were written by one of those awful, awful socialists that your mother warned you about, which explains why you will never hear this sentiment expressed by any TV-land pundit. But there's truth in the words quoted above -- more truth than you will hear on any cable news channel.

What Obama didn't say. Actually, there was a kind of truth in Barack Obama's address to the nation. In this case, the truth hides in the subtext:


Across the border in Syria, we have ramped up our military assistance to the Syrian opposition. Tonight, I again call on Congress, again, to give us additional authorities and resources to train and equip these fighters. In the fight against ISIL, we cannot rely on an Assad regime that terrorizes its own people -- a regime that will never regain the legitimacy it has lost. Instead, we must strengthen the opposition as the best counterweight to extremists like ISIL, while pursuing the political solution necessary to solve Syria’s crisis once and for all.

You cannot understand what Obama is really saying here unless you know the things that he would prefer not to talk about.

Obama never tells his audience that the Christians and other minorities within Syria desperately want Assad to win, and that even secularists who despise Bashar Assad understand that he is far preferable to his jihadist opponents.

Obama never explains that ISIS didn't get all of that American heavy weaponry by accident.

Obama hides the fact that the head of the FSA has said that he welcomes all aid from ISIS and other Al Qaeda-linked jihadists.

Obama doesn't want you to know that guy who ate a Syrian soldier's heart was not an ISIS fighter but a "moderate" FSA fighter.

Obama never brings up the fact that the "moderate" FSA has instituted a reign of terror in areas it controls.

Obama can't tell you that the FSA has staged attacks on churches and then pretended that pro-Assad forces were to blame.

Just tonight, the NYT published a report that Assad used chlorine gas to attack civilians. (As if he would do such a thing now!) Very soon, I will show you evidence (in the form of hacked emails from an FSA supporter) that the FSA possesses chlorine weapons.

Justin Raimondo has it right:


The fact of the matter is that there are no alternatives to Assad aside from ISIS. The kidnapping of Sotloff by the FSA and his quick transfer to the custody of ISIS proves they are operationally inseparable. After all, what is the so-called Free Syrian Army except for a vague collection of militias – Syria has over 1,500 of them! – of dubious loyalties loosely aligned with the radical Islamic Front – which, in turn, is close to Al Nusra, the official Al Qaeda affiliate in Syria. The fine distinctions drawn by deskbound analysts seem to evaporate into nothingness on the ground in Syria. Whatever differences exist between these factions and ISIS is down to turf, not ideology. The President himself told Tom Friedman that the idea of Syrian "moderates" among the rebel fighters is "a fantasy." Does Larison know any better?

What’s really ludicrous is the notion that ISIS is thriving due to a sinister plot by the wily Assad, who is deliberating laying off his deadliest and most well-armed enemies because he somehow "needs" them. This is like keeping a pet rattlesnake because you want to get rid of the gophers.

I predict that this new war will result in the fall of the governments of Iraq and Syria. The real purpose of this war is not to destroy ISIS but to put a rebranded and renamed version of ISIS in charge of a new Sunni state -- and to keep the Sunnis and the Shiites locked in perpetual war.

(Note: I've rewritten this piece since original publication to include more links and additional data.)
posted: 12:35 AM