I'm still not caught up on my current events reading, so let's indulge in our tradition of running non-political piffle posts on the weekends. Today's subject is Edgar Allan Poe.

Poe has been on my mind a lot this past year, because I've been toying with the idea of making a film about Baltimore's most famous mysteries. The most famous of 'em all is the strange death of the master of ornithological morbidity. 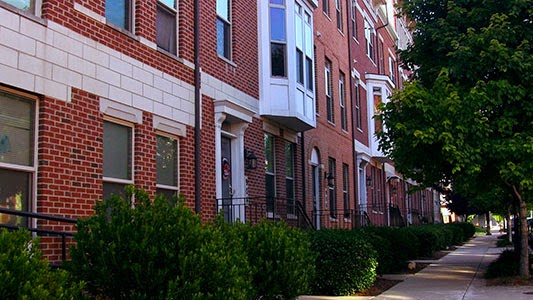 Nobody really knows how the man died. Schoolteachers used to say that he drank himself to death, but that's not really true. There was no alcohol on his breath when he was found on a Lombard Street sidewalk, drifting in and out of consciousness. (The picture shows pretty much the exact spot.)

True, he was found outside of a tavern called Gunner's Point, and he was delirious. But I don't think that drink was the cause of his condition. The place was then being used as a voting hall, and Poe's death probably had more to do with ballots than with bottles.

It was election day. The Whigs were willing to do anything to win.

The key clue in this mystery has to do with the great author's clothing. Poe habitually wore dapper dark suits -- yet when he was found on Lombard Street, he wore extremely shoddy clothing that didn't fit. Obviously, the clothing belonged to someone else.

Of all the theories that have been sounded, only one adequately accounts for the "clothing conundrum": The theory that Poe was a victim of "cooping." In those days, party operatives hoping to swing a close election would kidnap strangers or the destitute and lock them in a basement -- a "coop." They would be fed food liberally laced with laudanum.

On election day, the half-crazed cooping victims would be sent to various polling places throughout the city and told to vote for a certain candidate. By this time, they would be hooked on laudanum and told that they could have more of the stuff if they cooperated.

The victims would be given different clothes, to facilitate voting multiple times

Poe, who had lived in Baltimore at an earlier stage of his life, was passing through the city on the way to New York to start a plum new job. He went missing roughly a week before he was found in front of that tavern. The coopers must have presumed him to be a stranger.

(Hm. Maybe we should run this story by Brad Friedman. This story has turned into an argument in favor of Voter ID laws...!)

Poe was taken to a nearby hospital, and remained delirious until his death a few days later. He was heard to mutter the name "Reynolds." That just happened to be the name of the Ward Captain for the Whig Party.

There's only one problem with this solution to Baltimore's greatest mystery: It's tantamount to saying that early America's greatest writer was murdered by a political conspiracy. And such things don't happen, do they? 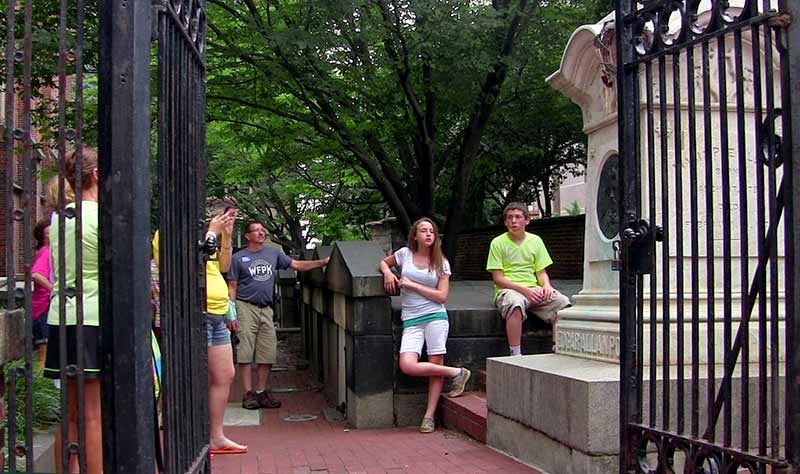 Grave matters. Each day, sightseers visit Poe's grave marker on the grounds of the Westminster Church, which was built directly atop a much older cemetery. (Many old graves are in a vault beneath the building.)

Legends surround this graveyard. My favorite concerns the "screaming skull" that had to be dug up and reburied encased in concrete because the sounds would drive people mad. The ghost of Poe himself has been seen here, and in a few other places.

The current Poe grave marker is actually his second (alleged) resting place. Originally, he was interred behind the church. But so many people came to visit the great man's burial spot that the Church decided to move him to a much more prominent location, easily visible from the street even after the gates have closed.

But how do we know that Poe is buried there?

This particular graveyard was a notoriously insecure resting place. It happens to be located near Davidge Hall, then and now a medical school. (It is, in fact, the medical school in longest continual operation in the United States.) The students always needed cadavers to study.

A couple of enterprising gentlemen worked out a system whereby "materials" from the Westminster churchyard would be stuffed into wine barrels and rolled through back alleys to the school. Then they would be carried up a spiral staircase and rolled into a circular auditorium.

According to longstanding lore, the suppliers ran out of "volunteers" from the graveyard and had to resort to a tactic quaintly known as Burking. I will not explain what that word means. Let's just say that it was a method of insuring freshness.

Was Poe's body one of the star attractions at Davidge Hall? Quite possibly. Those who tell the story of the medical school's gruesome past say that nearly everyone who made a home at Westminster Church found that the accommodations were quite temporary. I've seen no proof that the actual bodies of E.A. Poe, his mother-in-law and his young wife lie beneath that fancy marker that attracts so many visitors each day.

Locked in. There's another colorful piece of lore surrounding that cemetery. For more than half a century, a masked figure known as the PoeToaster would slip into the graveyard at midnight on Poe's birthday, January 19. The Toaster would leave three roses and a bottle of expensive French cognac.

In recent years, the Toaster has been a no-show. However, someone still leaves roses at the site of the original Poe grave: The photos reproduced here were taken about a week apart.

The Toaster has been photographed only once. (The shot appeared in Life magazine in 1990.) However, I have a clue as to who he really was, and what the motive might have been.

My moment of samsara came quite a few Sundays ago, while filming in the rear of that cemetery. The gatekeeper, not knowing I was there, locked me inside.

Yes, I was all alone in a graveyard at night with the corpse of Edgar Allan Poe. (The alleged corpse.)

Not to mention the Screaming Skull. (Which I did not hear.)

Naturally, I scouted the perimeter of the yard, looking for an easy way to scale the spiked fence. When I was a young man, getting over an obstacle of that sort would have been a snap. But at my current age, the task proved far from easy. My difficulty in performing such a simple stunt made me feel a bit ashamed -- in fact, it almost punctured my sense of masculinity.

While making my descent to freedom, a thought occurred to me: How could the Poe Toaster, in period garb and wearing a mask, perform this feat of athleticism on a frigid January night, unseen by the gathered crowd?

Answer: He couldn't. He must have had a key. He entered the cemetery through the church's back door.

Which means that we're dealing with someone who worked for the church.

Which means that the mystery man was actually part of a long-running publicity stunt.

More than that. I don't see how the "suppliers" for Davidge Hall could have done their work without a key to either the graveyard or the Church. In other words, they must have had help from an insider.
posted: 4:13 PM