Yesterday's post was about Pando, the Thiel-funded cyber-publication obsessed with attacking Glenn Greenwald and all known associates (including and especially Ed Snowden). That piece forces us to consider the larger question of propaganda. How can you tell the difference between the paid propagandist and someone who simply has a view which differs from your own?

One key "tell," methinks, is the "any stick to beat a dog" attitude.

The propagandist does not care much for consistency. Any attack which denigrates the target may be used, even when that attack conflicts with something the propagandist may have said earlier. This Pando piece offers a superb example of what I'm talking about. Take a look at the illustration... 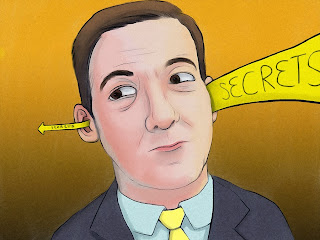 The message is easy enough to grasp. We are being told that Greenwald is a filter: Big secrets go in, small secrets come out.

Pando's been sounding that theme for a while. But on this occasion, the very same Pando article approvingly links to this anti-Greenwald, anti-Snowden piece published in the Christian Science Monitor.

The CSM piece accuses Greenwald of being the new Joe McCarthy. It's a bizarre accusation: Although the old Tailgunner was a man of many sins, nobody ever accused him of revealing secret documents. I think we're supposed to call Greenwald "the new McCarthy" because he attacks his attackers. GOP rabble-rousers often take umbrage when a target mounts a defense: "How DARE you punch back when I punch you? You...you fiend!"

The piece then goes on to say that Ed Snowden is a bad guy because his revelations are making it more difficult for the NSA to combat the Chinese, the filthy Russkies, and "Mexican drug cartels."

That's right. Remember this presentation on how to use the internet as a psy-war tool? Now we're supposed to believe that those techniques were directed not against you and me but against "Mexican drug cartels."

Right. Pull the other one. 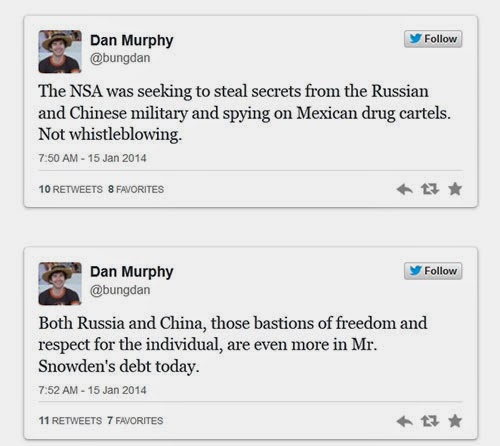 In order to underline the "any stick to beat a dog" approach, let's make our comparison (a little bit) visual. Here are a couple of tweets from the guy who wrote that Christian Science Monitor attack on Snowden.

See the problem? If you still don't get it, glance rapidly between these tweets and the cartoon above. Notice the contradiction?

Some of you may still need me to spell it all out. (I live in a working class suburb of Baltimore. I am used to being around people who need things spelled out for them.) Very well.

My friends, you can attack Greenwald and Snowden in one of two ways:

1. You can say that they are revealing too many secrets in a scattershot fashion. You can say that G and S are making it harder for our intelligence services to do their fine work against commies and cartels and that awful, awful Putin fellow.

2. You can say that Greenwald is not divulging enough secrets. You can accuse Greenwald of hiding the really important stuff. You can imply that G and S must be secretly working for our intelligence services in some fashion.

You can try one argument or the other. But you can't have it both ways. Attack 1 and Attack 2 contradict each other and cannot be reconciled.

That contradiction will matter to you only if you are the sort of person who likes to think about things logically. Most people don't. The propagandist does not care one whit about logic. The propagandist cares about only one thing: Any stick to beat a dog.

Another example: Instead of "Any stick to beat a dog," Taylor Marsh uses the term "the kitchen sink theory of political attacks." She uses the phrase to describe the "shoe truthers" who think that Hillary Clinton staged the incident in which a bizarre woman from Arizona tossed a shoe at her. (The shoe thrower was named Allison Ernst and she's facing up to a year in jail.) Marsh:


The more Republicans pound on Hillary Clinton, with their overzealous glee, the easier it will be for people to tune any criticism out. It will just get too predictable, coming off as exactly what it is, doing everything they can to diminish her.

Is this truly the case? Does the Anything Goes approach to propaganda ultimately fail because it desensitizes the audience?

Maybe. But maybe not. Maybe people will think that so much smoke must indicate the presence of a fire.

Marsh recalls 2008 as well as anyone else. At that time, she defended Hillary against the "anything goes" propaganda attacks coming from the Obama forces. And then Marsh turned around and became an Obot -- for a while.
posted: 8:47 AM