It's the morning after the Boston Marathon Massacre -- an event captured in this collection of horrific-yet-epic high-resolution photos -- and the public is grasping for clues. Who is responsible? One of the more intriguing early reports came from CBS News senior correspondent John Miller...


authorities are also reviewing surveillance video that shows a man from behind carrying two backpacks near the site of the explosions. Authorities are not sure whether the subject in the video is linked to the blasts.

Oddly, no other news source has independently confirmed this "surveillance video" claim, although AP (not to mention a number of right-wing blogs) have referenced Miller's story.

A search warrant was served on an apartment in Revere, a suburb in Boston.

WBZ says the search lasted nine hours. The Revere Fire Department wrote on its Facebook page it was for "a person of interest."

Two men were questioned by federal agents in the lobby overnight and handed over their passports before they were allowed to go upstairs, WBZ reports.


The most recent reports imply that this apartment was rented to the same 20 year-old Saudi male, now hospitalized, who was touted as a possible suspect by a number of early news accounts.

There is also the surprisingly vexed question of unexploded devices allegedly recovered near the finish line of the Marathon. Did they or did they not exist? The same recent CBS report includes this paragraph:


CBS News has learned no unexploded devices were found in the vicinity of the race, contrary to earlier reports.

This earlier AP report told a quite different tale...


As many as two unexploded bombs were found near the end of the 26.2-mile course as part of what appeared to be a well-coordinated attack, but they were safely disarmed, according to a senior U.S. intelligence official, who also spoke on condition of anonymity because of the continuing investigation.

Very odd, this. "Senior intelligence official" is how reporters usually refer to someone at the very top of an agency who speaks off the record. But how could an authority in so august a position get such an important fact wrong?

This source (for what it is worth) says


Police found an unexploded bomb at 600 Boylston Street and had its Bomb Squad detonate it.

I do recall the detonation being covered live on the news. 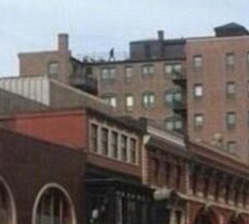 There is also the question of the unidentified man photographed on the rooftop of a building overlooking the bombsite.  Although many have offered theories about this figure, the most interesting comment may be found here:


I just checked online. The building he is standing on is 755 Boylston Street. It's a residential building with a rooftop deck. The building also has security and surveillance system in the common areas which means there was most likely a camera on the roof.

I checked out that address on Google Earth; there appears to be patio furniture on that roof. Since the patio is likely accessible only by someone who lives on the top floor, I presume that the identity of this mystery man will soon be clarified.

Finally, there is the mystery of the fire at the JFK Library. Although initial reports suggested that a bomb had exploded here, these were soon corrected by accounts which spoke of an electrical fire unrelated to the bombings at the marathon finish line. This story, however, re-opens the possibility of a linkage.