It's true: Fugitive Boston bomber Dzhokhar Tsarnaev had a Twitter account. Here's an actual picture of his actual cat: 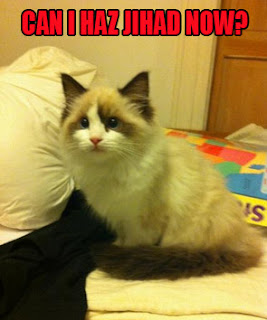 Okay, I added some verbiage. But honest, that really is the guy's cat. Cute, huh?

Other memorable tweets: Two days after the bombing, Dzhokhar reported that he was "a stress-free kind of guy." When someone else tweeted a sad human interest piece about one of the fatalities, Dzhokhar responded: "fake story."

On March 10, he wrote "There is absolutely no excuse for being a male cheerleader." An informant tells me that George W. Bush offered this response: "I beg to differentiate."

On April 15, Dzhokhar wrote a strange message in apparent reference to another tweet about the Westboro Baptist Church: "and they what 'god hates dead people?' Or victims of tragedies? Lol those people are cooked."

The right keeps finding new ways to go mad. Glenn Beck thinks that the Boston Marathon Massacre is a reason to impeach Obama, because the local cops released that Saudi national (remember him?) who was cleared of any involvement in the crime. A number of right-wing comment-writers have voiced the suspicion that Bill Ayers was somehow responsible. The Family Research Council says that gay marriage caused the terror attacks. And, as always, many right-wing responses are so schizy and disjointed, they resemble a game of Mad Libs gone horribly wrong:


quit googledjunk
psst: its Chechnyan
slaughtered by Putin dumb police no by Chechnyan

Whenever I see surreal comments of this sort (and they appear all the time throughout blogistan right), I wonder if we're dealing with some kind of code or cipher. Perhaps the writer should have mentioned something about noon blue apples...
posted: 5:33 PM