Talking Points Memo
has finally noticed Obama's big cave-in on Social Security benefits. Of course, this humble blog had the story last Friday -- "Bad Friday," as I called it. And of course, some of us have been talking about chained CPI for a lot longer. 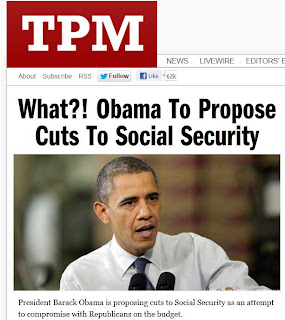 What amuses me is Josh Marshall's sense of incredulity. He acts as though he didn't see this one coming.

The Great Cave receives attention today on Democratic Underground, though not on the front page of the Daily Kos. The Huffington Post doesn't headline this betrayal, although it does give us this good piece by Robert Reich. He also put together the video embedded above.

Meanwhile, Paul Krugman reminds us, once again, of the great truism which the right hates to hear: We should combat debt only during good times, not bad times. During bad times, the government should "prime the pump" (to use a once-familiar phrase) by putting people to work. If that task requires borrowed money, so be it. We're borrowing it from ourselves, and we can pay it back during the flush period.

That, my friends, is Keynesianism -- real Keynesianism, as opposed to the fake stuff which animates the right-wing imagination.


Now, the fact is that these ranters have been wrong about everything, at every stage of the crisis, while the Keynesians have been mostly right. Remember how federal deficits were supposed to cause soaring interest rates? Never mind: After four years of such warnings, rates remain near historic lows — just as Keynesians predicted. Remember how running the printing presses was going to cause runaway inflation? Since the recession began, the Fed has more than tripled the size of its balance sheet, but inflation has averaged less than 2 percent.

Stockman's back. Krugman also has an excellent riposte to those who tout David Stockman's volume, which has received so much recent attention:


Although Mr. Stockman’s willingness to criticize some Republicans and praise some Democrats has garnered him a reputation as an iconoclast, his analysis is pretty much standard liquidationism, with a strong goldbug streak.

Stockman's willingness to slam Republicans is really a Trojan Horse designed to sneak conservative ideas into enemy territory. As some of you may recall, Stockman knows a lot about Trojan Horses. The man was a whore when he worked for Reagan, and later wrote a book in which he pretty much admitted his whoring ways.

In Stockman's view, FDR committed the original sin when he took us off the gold standard. The great forty-year boom that followed 1940 was just a bunch of inexplicable stuff that happened.


In particular, like so many in his camp, Mr. Stockman misunderstands the meaning of rising debt. Yes, total debt in the U.S. economy, public and private combined, has risen dramatically relative to G.D.P. No, this doesn’t mean that we as a nation have been living far beyond our means, and must drastically tighten our belts. While we have run up a significant foreign debt (although not as big as many imagine), the rise in debt overwhelmingly represents Americans borrowing from other Americans, which doesn’t make the nation as a whole any poorer, and doesn’t require that we collectively spend less. In fact, the biggest problem created by all this debt is that it’s keeping the economy depressed by causing us collectively to spend too little, with debtors forced to cut back while creditors see no reason to spend more.

So why do so many elite voices insist on austerity, on robbing Grandma to pay Goldman?

The answer comes down to a single word: Propaganda.

A side-trip into Nazi-Land.
And that brings us to John Pilger...


What is modern propaganda? For many, it is the lies of a totalitarian state. In the 1970s, I met Leni Riefenstahl and asked her about her epic films that glorified the Nazis. Using revolutionary camera and lighting techniques, she produced a documentary form that mesmerised Germans; her Triumph of the Will cast Hitler’s spell.

She told me that the “messages” of her films were dependent not on “orders from above”, but on the “submissive void” of the German public. Did that include the liberal, educated bourgeoisie? “Everyone,” she said.

I never met Reifenstahl, but I've read much about her. I have studied her work, and used to own a copy of this marvelous documentary about her. It's time someone finally told the truth about Triumph of the Will: It is not effective propaganda. It didn't pave the way for the Nazi rise, because it was made after the Nazis had already risen.

Most of the people who talk about the movie have never seen it -- at least not all the way through; we've all seen bits and pieces. Now, I have seen it as its maker intended -- in 35mm, in a theater. If Pilger had done likewise, and if he knew anything about film history, he might not talk about the movie's "revolutionary camera and lighting techniques." Technically and stylistically, Reifenstahl does nothing that hadn't been done before. Sure, she gets a lot of good angles, but any number of other film-makers would have done likewise. Much of the movie consists of really dull parade footage.

More importantly, the film fails as propaganda. The purpose of propaganda is to change minds. I doubt that a single person has ever come out of Triumph thinking: "You know, I used to dislike Hitler, but now I see his good points..."

You know who agreed with my assessment? Josef Goebbels. He hated the movie.

(He also hated Leni personally. So how did she get carte blanche? Probably by sleeping with with Hitler -- although she always denied doing so, and became furious whenever anyone mentioned the accusation.)

Goebbels, who knew a thing or two about propaganda, insisted that the Nazis should always be portrayed as struggling underdogs doing noble combat against more powerful forces. Frankly, I can see his point: If you want to change the way people think, triumphalism is the wrong note to strike. Although she did not so intend, Riefenstahl makes the Nazi leaders look like bullies, which is why why footage from her movie plays so well in anti-Nazi documentaries. Nobody likes a bully.

In fact, most people (even most well-off people) feel bullied. The propagandist must appeal to the average person's sense of resentment: Here's how you can achieve fairness in a world that has pushed you around. You may have to struggle for a while, but that struggle proves your virtue.

That "submissive void" (to use Reifenstahl's evocative term) didn't just happen. It resulted from the work of hundreds of propagandists who were much better at the job than she ever was.

This lesson applies to the present day.

Although the majority of Americans do not favor austerity or cuts to Social Security, the smart people in DC and New York  -- yes, even the "liberal, educated bourgeoisie" -- have concluded that austerity is inevitable. Why? Because over the past thirty-odd years, an army of propagandists has created a "submissive void." This propaganda barrage has convinced the elite and their toadies that the Keynesians are bullies. In our topsy-turvy political culture, the overdogs have convinced themselves that they are the underdogs.
posted: 9:47 AM