Kim Jong-Un certainly speaks as if he's serious about war. He has no hope of winning and no real casus belli. Nevertheless, like a 13 year-old boy buying a ticket to the latest Michael Bay movie, Kim seems to have an overwhelming need to see things get "blowed up real good," even if the explosions serve no rational purpose.

Could he really do it? Conventional thinkers will tell you he can't mount a nuclear strike against the U.S., since he has no missiles with sufficient range. But if we apply a little unconventional thought, we can suggest an unconventional scenario.

Yes, there is a way for Asia's brat to make mushroom clouds loom over American territory.

The North Korean situation is reminiscent of The Mouse That Roared, although Little Kimmy is much less lovable than Peter Sellers was. As I re-ran that film in my head, a disturbing possibility struck me: Could Kim have obtained a portable nuclear weapon -- the proverbial suitcase nuke?

Note the wording of this threat:


“We formally inform the White House and Pentagon that the ever-escalating U.S. hostile policy toward the DPRK and its reckless nuclear threat will be smashed” by “cutting-edge smaller, lighter and diversified nuclear strike means of the DPRK,” a spokesman for the Korean Peoples’ Army (KPA) declared this week, using the formal name for the North – the Democratic People’s Republic of Korea. 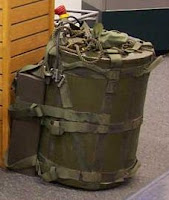 "Suitcase nukes" aren't really small enough to fit in a suitcase. But some nuclear weapons are smaller and lighter than you may prefer to believe.

Of course, the usefulness of such devices remains a matter of debate; some have even questioned their very existence. Most sources concede that Russia and the United States have both manufactured "small" nuclear bombs capable of being transported by human carriers. The example in the accompanying photo looks like a backpack -- a really, really big backpack.

Any discussion of portable nuclear devices invariably includes reference to a Russian defector named Stanislav Lunev, who claimed that the former Soviet Union had come up with transportable bomb called the RA-115. By "transportable," we're talking about something that weighs roughly 60 pounds. I don't know the yield, but it is probably under a kiloton. (To give you a point of reference, the Hiroshima blast was 16 kilotons.)

Of course, defectors often stretch the truth, and the FBI concluded that Lunev engaged in at least some hyperbole. How much hyperbole? I don't know, and I'm not sure that the FBI knows either.

Lunev claimed that an unspecified number of the RA-115s exited Russian control after the fall of the USSR. In the 1990s, according to a number of published reports, Russian General Alexander Lebed said that 100 "small" nukes had gone missing. Boris Yeltsin fired Lebed when he (Lebed) tried to inventory the RA-115s. Russian legislator Sergey Sinchenko put the number of missing nuclear weapons as high as 250.

A few not-really-authoritative websites -- like this one -- claim that North Korea has tried to purchase Russian porta-nukes. We know that, in the Yeltsin era, the oligarchs cared about money a lot more than they cared about safety, morality or common sense.

This 2006 story from the Telegraph may be relevant to our present inquiry:


Russia is facing criticism after secretly offering to sell North Korea technology that could help the rogue state to protect its nuclear stockpiles and safeguard weapons secrets from international scrutiny.

In what appear to have been unguarded comments, Aleksei Grigoriev, the deputy director of Russia's Federal Information Technologies Agency, told a reporter that North Korea planned to buy equipment for the safe storage and transportation of nuclear materials, developed by a Russian government-controlled defence company.

The company, Atlas, also received interest from the North Koreans in their security systems and encryption technology - which were kept from display at the exhibition for security reasons.

In remarks made to the Russian Itar-Tass news agency - hastily retracted after publication - Mr Grigoriev said that the main aim of the June 28 exhibition was "establishing contacts with the Korean side and discussing future co-operation".

Officially, the Russian government has condemned North Korea's nuclear arsenal. Interestingly, the above news article is attributed to "a Special Correspondent in Pyongyang and Michael Hirst." This wording gives the impression that Hirst got the details from an anonymous North Korean informant.

Was this 2006 story disinformation? Possibly. Everyone knows that neo-cons of a certain stripe yearn to re-ignite the Cold War. But I don't think that nostalgia for the paranoia of yesteryear prompted this particular article.

If we presume that the Telegraph's information is on the level, we must ask the question: Did North Korea want "equipment for the safe storage and transportation of nuclear materials" (an irritatingly vague phrase) because it had acquired RA-115s?

Those things have been known to leak.

You may be wondering how the North Koreans could transport such a weapon, since a leak-prone 60 pound nuclear bomb is not an easy thing to smuggle. Adding to the difficulty is that fact that the RA-115 must be plugged into a power source. Although the device has a battery back-up, no battery lasts forever.

So how could the North Koreans get a thing like that into an American city? For one possible scenario, consult a long article by Bill Keller titled "Nuclear Nightmares," published on May 26, 2002 in The New York Times magazine:


To build a nuclear explosive you need material capable of explosive nuclear fission, you need expertise, you need some equipment, and you need a way to deliver it.

Delivering it to the target is, by most reckoning, the simplest part. People in the field generally scoff at the mythologized suitcase bomb; instead they talk of a "conex bomb," using the name of those shack-size steel containers that bring most cargo into the United States. Two thousand containers enter America every hour, on trucks and trains and especially on ships sailing into more than 300 American ports. Fewer than 2 percent are cracked open for inspection, and the great majority never pass through an X-ray machine. Containers delivered to upriver ports like St. Louis or Chicago pass many miles of potential targets before they even reach customs.

"How do you protect against that?" mused Habiger, the former chief of our nuclear arsenal. ''You can't. That's scary. That's very, very scary. You set one of those off in Philadelphia, in New York City, San Francisco, Los Angeles, and you're going to kill tens of thousands of people, if not more." Habiger's view is "It's not a matter of if; it's a matter of when" -- which may explain why he now lives in San Antonio. 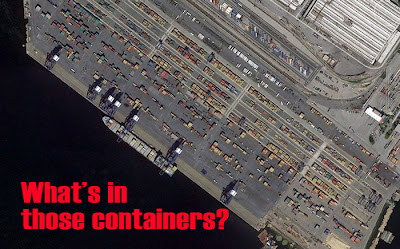 Human beings can live in such containers for a suprisingly long period of time. It's been done. A well-known writer once told me (circa 2005) that inspectors have found human scat and other indicators of recent human habitation within an empty cargo container in a New York port. People have used this method to enter the United States secretly.

A cargo container could a bomb, a couple of "minders," and a power source.

This WP story from last July tells us that this terrifying hole in our security has never been properly addressed:


The Obama administration has failed to meet a legal deadline for scanning all shipping containers for radioactive material before they reach the United States, a requirement aimed at strengthening maritime security and preventing terrorists from smuggling a nuclear device into any of the nation’s 300 sea and river ports.

The Department of Homeland Security was given until this month to ensure that 100 percent of inbound shipping containers are screened at foreign ports.

But the department’s secretary, Janet Napolitano, informed Congress in May that she was extending a two-year blanket exemption to foreign ports because the screening is proving too costly and cumbersome. She said it would cost $16 billion to implement scanning measures at the nearly 700 ports worldwide that ship to the United States.


If a bomb goes off, that little-known decision will become instantly infamous -- and it may (fairly or unfairly) transform Obama into the most reviled president in history. Of course, Bush could have implemented the same program had he so chosen. (To put the price of port scanners into perspective, the F-35 Joint Strike Fighter program will set taxpayers back $400 billion -- at least.)

Incidentally, one of largest general cargo facilities in the country is in Dundalk, Maryland, not far from where I live. Dundalk would make for an excellent target, since it is 17 miles away from NSA headquarters. A breeze in the right direction could make the eavesdropper's nest uninhabitable.

Chicago is another possible target. Anyone who desires to mount a symbolic strike against the heartland would want to hit that town.

So...yeah. I think that Kim Jong-Un could do it. But will he?

All the news coming out of North Korea indicates war. The only thing that does not indicate war is the simple, obdurate fact that Kim's situation is hopeless. He cannot win. I doubt that he could keep the fight going for longer than a day. If he strikes, he dies, along with many of his countrymen (presuming he cares about them).

So the question comes down to this: Does Kim Jong-Un want to fulfill his sick, violent fantasies more than he wants to live?

Added fun fact: The United States used to adhere to a regulation prohibiting the development of nukes below 5 kilotons. In 2004, the Bush administration quietly dropped that rule. We may thus fairly presume that America has developed a new generation of elegantly-designed, state-of-the-art porta-nukes, with Android, 4G, USB ports, a headphone jack and a targeting system based on Angry Birds.
posted: 2:52 AM