(Note: This post contains original research on an important topic. I beg readers to spread the word.)

Since when has it become acceptable for television commercials to tell outright lies? I was under the impression that deceptive advertising was illegal.

You know about Progressive Insurance. That's the company whose TV ads feature a lovely lady wearing a white uniform and blindingly red lipstick. The folks at Progressive are pushing a device called Snapshot which plugs into your car's steering column and sends the company information about your driving habits. If you practice good habits, you get a substantial discount.

The question is: How much info are you sending to them? Are they tracking your location via GPS? Are they keeping track of how fast you go? 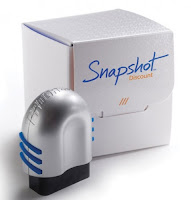 Progressive insists that they don't collect location and speed info. In the video embedded above, you'll see a Progressive commercial in which the lady with the stoplight lips assures you that the company doesn't want to know where you go or how fast you get there. All they want to know is the amount of driving you do, how hard you hit the brakes, and what time of day you travel.

Even if that were all there were to it, I still would advise you to steer clear of Snapshot. Insurance companies have a financial incentive to deny claims. The more info you give them, the more reasons they have for issuing a denial.

But the real problem is this: I've uncovered evidence that Progressive Insurance is lying about Snapshot.

I'm sure that Ms. StoplightLips -- whose real name is Stephanie Courtney, and who is surely a decent and well-meaning person -- would not knowingly tell lies. Nevertheless, there are strange discrepancies between the things that lovely Stephanie is being paid to say on TV and the things we learn if we do a little research.

First, let's look at the issue of speed. The ads are unequivocal: Progressive doesn't want to know how fast you drive. But the small print tells a story with conflicting details...

Snapshot focuses on how safely, how often, how far, and when you drive, NOT where you drive. The Snapshot device does not contain GPS technology and does not track vehicle location or whether you’re exceeding the speed limit.


(Emphasis added.) Well, which is it? Do they collect data about speed, or don't they?

A close reading of the above text reveals the truth: Of course Snapshot transmits info about "vehicle speed." The device simply doesn't reveal whether or not you were exceeding the speed limit at any given time.

But if the company collects speed data, investigators can easily discover whether you were going over the limit after the fact. They may even be able to do so in real time. (Has someone written software which collates the speed limits on all of America's roads? I don't know, but I wouldn't be surprised to learn that the insurance companies have an app for that.)

So: If you put in a claim, Progressive will know if you were traveling 42 miles per hour in a 40 mph zone. Claim denied!

Wait. Can Snapshot's speed data be used to deny a claim? Progressive offers mixed signals. On one hand, the company says:

We will not use Snapshot data to resolve an insurance claim you have with us without first obtaining permission from you or the vehicle owner.

On the other hand:

We will not share Snapshot data with any third parties unless it’s necessary or appropriate to service your insurance policy, prevent fraud, perform research, or comply with the law.

That's a pretty damned huge loophole: "...if it's necessary or appropriate to service your insurance policy." If the matter involves the legal system in any way -- as very likely it will -- your speed data will no longer be private. Conceivably, even a civil case unrelated to driving could result in a subpoena for information. 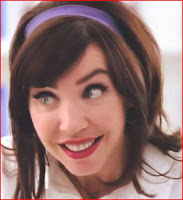 In my judgment, the company's "small print" admission about speed data is in direct conflict with what lovely Stephanie says in the commercials.

Now let's turn to location tracking. Even in their "small print" area, Progressive is unequivocal on this score:

The Snapshot device does not contain GPS technology and does not track vehicle location...

And that is that, yes?

No. Snapshot is an example of what the industry calls a telematics device, defined here as...

Hmm. If telematics involve GPS by definition, can we trust Progressive?

Drivers plug a device, the “Snapshot,” into the car’s onboard diagnostic port, or OBD-II, typically found near the steering wheel. [The OBD-II is a standardized digital communications port which was made mandatory in 1996 for all cars sold in the United States.] Using telematics and mobile technology, as they drive, information is shared wirelessly, via AT&T’s network, with Progressive.

(Emphasis in original.) If the company uses ATT's network, then they can triangulate location. That's the key part they're not telling you.

Cell phone triangulation is not the same as GPS; it's a different technology. While triangulation is not as pinpoint accurate as GPS (which can track you to the square foot), triangulation allows trackers to use the information from two or more transmission towers to get a very good idea of where you are. In fact, the FCC has mandated increasingly accurate location tracking from non-GPS mobile devices. Very soon, wireless carriers will be required to provide

...far more precise location information, within 50 to 100 meters in most cases.

(Fifty meters roughly equals 55 yards.) So who is kidding whom, Progressive? GPS isn't the only way to spy on someone.

Moreover, Progressive's claim that Snapshot contains no GPS data is in direct conflict with what we read in this Wikipedia article on telematics:

Telematic auto insurance was independently invented and patented[12] by a major U.S. auto insurance company, Progressive Auto Insurance U.S. Patent 5,797,134 and a Spanish independent inventor, Salvador Minguijon Perez (European Patent EP0700009B1). The Progressive patents cover the use of a cell phone and GPS to track movements of a car. The Perez patents cover monitoring the car's engine control computer to determine distance driven, speed, time of day, braking force, etc. Ironically, Progressive is developing the Perez technology in the US and European auto insurer Norwich Union is developing the Progressive technology for Europe. 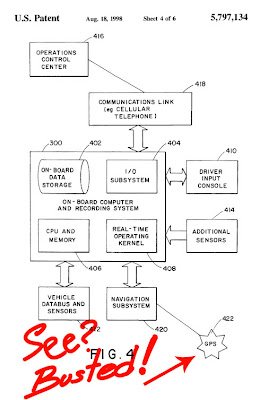 Figure 4 of the patent reveals that the system does, in fact, make use of GPS! Don't take my word for it. Hit the link, read Progressive's own patent, and see for yourself. (Click on the image to your left to enlarge it.) If you go further into the patent for the thing-that-became-Snapshot, you'll find that the data sent to Progressive will include:

How can Stephanie tell the world that Snapshot can't track your car's location, when the patent clearly states otherwise?

Progressive is not the only company getting into the telematics business. Pretty soon, these devices will be standard.

(In case you're curious: No, I'm not writing these words to justify my own bad driving habits. I rarely drive, and when I do, I stay under the limit and brake very early. Even when I was in my 20s, my brother used to kid me about driving like someone's grandma.)

Perhaps some of you are now itching to write a justification for Progressive's tracking abilities. Perhaps some of you want to serve up a variation of that classic line: "If you're doing nothing wrong, you have nothing to worry about."

Even if I were to grant that point -- which I don't -- we still must face the issue of deceptive advertising. If a fast food company says that its burgers contain 100% beef, then I expect the meat patty to have nothing but dead cow in it; I don't want soy beans or corn meal or other filler. Similarly, if Stephanie Courtney steps in front of a video camera and announces that Progressives' new doohickey can't track your speed or location, then I expect that statement to be accurate on its face. I don't want the company to mount a well-lawyered defense that relies on casuistry or strained argumentation. I don't want to hear any company spokesperson saying: "Well, technically..."

A note about the embedded video: The presenter, Mark Dice, holds to a lot of conspiratorial beliefs which I do not share. I don't know the guy and I do not agree with much of his worldview. But when it comes to this issue, he's right on target.

Again: PLEASE MAKE SURE THAT PEOPLE READ THIS POST. I would like to see congressional hearings on this issue. (And thanks to reader Prowlerzee for sending me down this research trail.)
posted: 9:38 AM