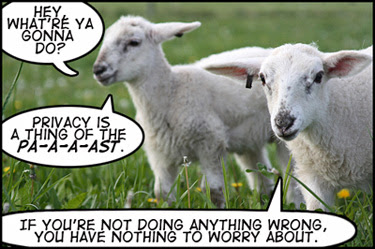 You thought SOPA was bad? Meet CISPA, the new threat to our online privacy. This is a "cybersecurity" bill designed to spy on you; as usual, they are using the "terrorists and pedophiles" bogeymen to cajole you into giving up your rights. From the Electronic Frontier Foundation:

Congress is doing it again: they’re proposing overbroad regulations that could have dire consequences for our Internet ecology. The Cyber Intelligence Sharing and Protection Act of 2011 (H.R. 3523), introduced by Rep. Mike Rogers and Rep. Dutch Ruppersberger, allows companies or the government1 free rein to bypass existing laws in order to monitor communications, filter content, or potentially even shut down access to online services for “cybersecurity purposes.” Companies are encouraged to share data with the government and with one another, and the government can share data in return...

The language is so broad it could be used as a blunt instrument to attack websites like The Pirate Bay or WikiLeaks.

Under the proposed legislation, a company that protects itself or other companies against “cybersecurity threats” can “use cybersecurity systems to identify and obtain cyber threat information to protect the rights and property” of the company under threat. But because “us[ing] cybersecurity systems” is incredibly vague, it could be interpreted to mean monitoring email, filtering content, or even blocking access to sites.

The broad language around what constitutes a cybersecurity threat leaves the door wide open for abuse. For example, the bill defines “cyber threat intelligence” and “cybersecurity purpose” to include “theft or misappropriation of private or government information, intellectual property, or personally identifiable information.”

Yes, intellectual property. It’s a little piece of SOPA wrapped up in a bill that’s supposedly designed to facilitate detection of and defense against cybersecurity threats. The language is so vague that an ISP could use it to monitor communications of subscribers for potential infringement of intellectual property. An ISP could even interpret this bill as allowing them to block accounts believed to be infringing, block access to websites like The Pirate Bay believed to carry infringing content, or take other measures provided they claimed it was motivated by cybersecurity concerns.

The language of “theft or misappropriation of private or government information” is equally concerning. Regardless of the intent of this language, the end result is that the government and Internet companies could use this language to block sites like WikiLeaks and NewYorkTimes.com, both of which have published classified information.


This very site would also be blocked. After all, bloggers discuss articles in the New York Times. Here's CNet:

The bill's sponsor, Rep. Mike Rogers (R-MI), is also trying to get tech press to tell you to think that his bill CISPA is "nothing like SOPA."

CISPA's primary function is to remove legal barriers that might keep Internet companies from giving all your communication and information to the government. It allows "cyber entities" (such as Internet service providers, social networks like Facebook and cell phone companies like AT&T) to circumvent Internet privacy laws when they're pressured by Homeland Security to hand over or shut down -- well, almost anything of yours online that the government wants, no warrant needed.


Let's translate all of this into the terms that might have applied back in, say, 1983 or 1978 or 1944. Whenever. Suppose the government in place during one of those years had said:

"We need access to your mail. Whenever we choose. Without a warrant. The post office must hand over to us any letters addressed to you. Afterward, we'll reseal the envelope and you'll never know that we read your correspondence. We need to do this because our nation faces such terrible threats. Commies. Nazis. Whatever. Remember: If you're doing nothing wrong, you have nothing to worry about."

Would your parents or grandparents have stood for such nonsense? Of course not.

So what's wrong with you? Why are modern Americans so sheep-like and compliant? Why do so many young people today mouth that favorite line of all good Nazis everywhere: "If you're doing nothing wrong, what do you have to worry about?"

What are we feeding our kids? Aren't young people supposed to be rebellious?

(I've yet to see any incontestable evidence that Manning is the one who leaked the cables to Wikileaks. Yes, he probably did release the helicopter video; that's a different case. The harsh treatment he has undergone persuades me that his captors are trying to force him to confess to something he did not do. The actual leaker of the cables may have been someone else at the DOD who wanted to make life miserable for a Democratic administration.)

If you want to take action, start here.

Get the hell out of Facebook -- NOW. Today. No excuses; no rationalizations. I don't want to hear any crap about business contacts or keeping up with family members or any of that nonsense.

When you gave Facebook your cell phone number, you gave Uncle the means to track your exact location 24/7 -- information they can use against you, should you ever decide to protest what this government is doing.

There are other social media sites, if you really must.

Leave Facebook today. And when you go, let Spooky-boy Zuck know that his support for CISPA was the final straw.

Besides -- Even CNN Tech admits that Facebook is no longer cool. See also here.
posted: 11:25 AM