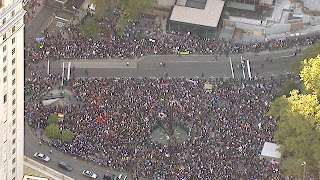 Lots of people, including this writer, have criticized the Occupy Wall Street movement for lacking a concrete goal. I have found it. I've come up with a single, clear demand -- easily stated and easily realized.

What I propose is not a final step but a first step. A demonstration of power, if you will.

If you are part of the movement, ask yourself: Do you truly want to gain power -- to get things done -- or do you just want to complain? In my experience, most leftwingers tend to view the exercise of power as a form of bad taste. Yes, power does corrupt -- but without it, what can be accomplished?

I propose that the OWS forces make a muscle and land a solid initial punch, aimed at a specific target.

Timothy Geithner. The Secretary of the Treasury must go.

Not only that. The world must understand that he was fired because the Occupiers demanded his removal. The man's termination notice must bear the initials OWS.

Here's how to do it: Every single time our beloved president appears in public to ask for cash, the protesters should screech: "Fire Tim or we'll fire you." Scream at the president rudely and ruthlessly until he capitulates to this demand. 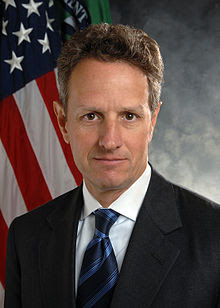 Simple, no? Eventually, even Obama will have to heed the message.

Will firing one bad appointee solve all problems? Of course not. It may not even solve any problems. Tim Geithner has already done the worst of his damage -- both to the economy and to the Democratic party. Besides, Obama may well replace him with someone worse.

What, then, is the advantage of this tactic? I'll give you six good reasons for going this route.

In the first place, forcing a president to do something he clearly does not want to do establishes true power. It tells the world: "Meet the new boss -- not the same as the old boss. The new boss is us." When the ancient Romans took over a province, they would nail up a few potential troublemakers just to demonstrate that they could do a thing like that with impunity.

Second: Forcing Obama to take an unwelcome step establishes once and for all that the OWS movement is not a stalking horse for the Obama campaign. It says to the world: "We don't work for this president. Either he starts working for us, or we'll find someone who will."

Third: Demanding that Obama fire Geithner forces the president to make a choice. Right now, he's trying to square the circle, solidifying the base while asking the Wall Streeters for cash. Obama can have one or the other but not both.

Fourth: Tim Geithner's policies have protected the miscreants while impoverishing millions. Yes, he is but one man, but he symbolizes something larger: He is the face of the Obama administration's soft-on-Wall-Street agenda. That's why the tea partiers rarely target him (except in a lackluster, pro-forma fashion). Forcing his removal signals a new era of populist intolerance for finance capitalism's ruinous greed.

Fifth: It's do-able. Not just desirable: Do-able. Let me explain.

The protesters have proffered all sorts of ideas, many of which are excellent. But they cannot be accomplished soon; these demands cannot establish immediate clout.

Without clout, you are simply a gathering of mice discussing the need to bell the cat.

For example, one of the early OWS organizers said that a primary goal should be to increase taxes on the wealthy. Do I concur with that sentiment? Of course; I must have written hundreds of posts advocating a steeply progressive tax policy. But this goal is for the longer term. Like it or not, Congress has power of the purse -- and even if the OWS movement were fifty times stronger, it could not get that kind of legislation through this House of Representatives.

If the OWS movement says "Vote Democratic and we may be able to have a better tax policy," the movement becomes an appendage of the party. Mistake.

One acquaintance tells me he'd rather get rid of the insufferably corrupt Clarence Thomas. That's not do-able, alas -- at least not in the short term. But Tim Geithner serves at the pleasure of the president; put enough pressure on the president and the man is gone.

Some say that Geithner wants to leave anyways. Fine. But if he goes, it is best for him to leave with an OWS boot-print on his rump. Once the movement scores a big first win, the second win becomes easier.

Some organizers have called for a "presidential commission" on separating politics from the corrupting influence of big money. Of course I believe in electoral reform; I've argued in favor of radical reform since the 1970s. Cleaning up our elections may be the single most important step this democracy could take. But reform won't happen soon, not with Congress the way it is, and not with the courts the way they are.

Besides, everyone knows that "commissions" are established by people who want to insure that nothing gets done. Sorry, but we're still in "Let's bell the cat" territory.

Ah...but showing Timmy the door? That we can do. That particular cat is very, very bellable.

Ending his career may be but the first move in a long, long game of chess. Still, that move will establish power.

Power is attractive. Power begets power. You know why so many dolts pay good money for shirts and bags and hats sporting corporate logos? Because those logos are totems of entities considered influential and successful. On a primal level, people want to associate themselves with the large, the impressive -- the powerful.

Force the president to fire Tim Geithner. Force Obama to do one major thing that he clearly does not want to do. Afterwards, both he and all other politicians will take the protesters ultra-seriously.

Oh...I forgot to mention the sixth reason to demand the canning of Timmy: He's awful.