Where is Osama Bin Laden? Defense Secretary Robert Gates doesn't know. He says that the U.S. has not had any good intelligence on Bin Laden for years.

Oddly, this statement implies that the U.S. cannot even pinpoint the country that Bin Laden calls home. Last June, Leon Panetta stumped for Pakistan: "The last information we had, that's still the case."

Yet the BBC has published a report stating that a Taliban detainee supplied information -- second-hand, admittedly -- that Bin Laden was in Afghanistan in February or January.

"The sheikh doesn't stay in any one place. That guy came from Ghazni, so I think that's where the sheikh was."

Ghazni, near the border with Pakistan, is usually considered out of bounds for American troops. This is the place where the Taliban destroyed an historic statue of Buddha.

The same informant offered some further details which have received insufficient attention:

The detainee, who cannot be named for legal reasons, said that militants were avoiding Pakistani territory because of the risk of US drone attacks.

"Pakistan at this time is not convenient for us to stay in because a lot of our senior people are being martyred in drone attacks," he said.

Pakistan's Prime Minister says that Bin Laden is not in his country.

And then there's this:

It is widely believed that Bin Laden returned to Afghanistan sometime in 2002 after his December 2001 escape from the Tora Bora mountains into Pakistan's tribal areas. Pakistani leaders have consistently claimed Bin Laden has never been in Pakistan and is more likely hiding out in Afghanistan or Iran.

This assertion, if true, conflicts with everything that we have been told for years. In 2005, CIA Director Porter Goss said that he had an "excellent idea" as to Bin Laden's location. His commentary indicated that politics, not a lack of information, impeded further pursuit -- at least, that's how I would interpret this gnomish pronouncement:

That is a question that goes far deeper than you know. In the chain that you need to successfully wrap up the war on terror, we have some weak links. And I find that until we strengthen all the links, we're probably not going to be able to bring Mr. bin Laden to justice. We are making very good progress on it. But when you go to the very difficult question of dealing with sanctuaries in sovereign states, you're dealing with a problem of our sense of international obligation, fair play.

Cryptic as these words may be, they seem to indicate that Bin Laden was -- to the certain knowledge of the U.S. intelligence community -- alive and residing in Pakistan (at least as of 2005), and that the difficulty in capturing him had to do with our relations with the Pakistani government.

So how do we square what Goss had to say with the recent suggestion that Bin Laden has been in Afghanistan since 2002? If the Afghan claim has been "widely believed" for years, then why was not the American public allowed to share in this wide belief?

I cannot help but note how convenient these stories are.

During the Bush era, the American public would not have tolerated being told that Osama was "widely believed" to be in Afghanistan -- a country where the niceties of international relations did not forbid us from operating. Now, President Obama wants to escalate the conflict in Afghanistan -- and I will not be surprised to see the administration announce that American troops have to go into the Taliban-controlled areas in order to capture Bin Laden.

Osama Bin Laden is wherever we want him to be.

In 2006, the CIA shut down the unit tasked with hunting Bin Laden. Intriguingly, this move occurred some months after Dr Clive Williams, director of terrorism studies at the Australian National University, claimed that he had received documents from a colleague in India providing evidence of Bin Laden's death in April of 2005. (Perhaps Porter Goss had an "excellent idea" that Osama was under the sod...?) I'm wondering why we've seen no further discussion of these documents -- after all, if a college professor can see them, so should we.

Also in 2006, semi-official sources in Pakistan spread the report that Bin Laden had died of Typhus.

Michael Ledeen, quoting "Iranians I trust," said that Bin Laden died that same year in Iran. Ledeen says that Bin Laden spent most of his time hanging out in that country since his expulsion from Afghanistan. Fat chance, say I. The kind of Iranians Ledeen might trust are not necessarily people I would trust -- and everyone knows that Ledeen and his associates have spent years trying to stir up a war against Iran. 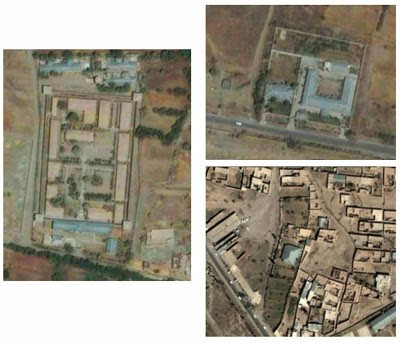 Earlier this year, two UCLA professors came out with this interesting report (pdf) indicating that Bin Laden was probably hiding in or around Parachinar, Pakistan, in Kurram province, near the Afghan border. The overhead photos reproduced here represent their three best guesses as to his current (or recurrent?) locale.

The paper states that the largest of these photos depicts a complex which may be a prison, although it has unusually well-maintained grounds. The other buildings seem to be rather large private residences.

Final note:
This is one of those topics that tends to bring out the hyper-macho asshole in many readers. I do not disrespect your opinion, but may I humbly ask you to refrain from offering your opinion as hard, proven, testable fact?