Many people have reacted with fear and anxiety to this New York Times story by William Broad and David Sanger. They want you to think that Iran has acquired “sufficient information to be able to design and produce a workable” nuclear weapon. This conclusion is based on an alleged "secret report" of the International Atomic Energy Agency, the U.N. nuclear watchdog group. (IAEA spokespersons officially tell a very different story.)

Is this information reliable? Consider the source. Broad and Sanger both worked closely with the NYT's infamous Judy Miller when she was ginning up evidence for war with Iraq. They have a history of using the New York Times to push neocon agit-prop. 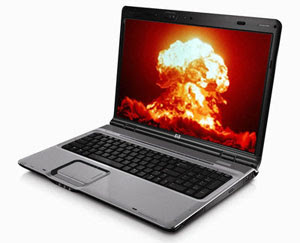 Moreover, this is old stuff repackaged to look like new stuff.

It all goes back to 2004, when U.S. intelligence acquired the so-called "laptop of death." Most of the scare stories about Iranian nukes that you've read over the past few years trace back to documents discovered on this laptop, which supposedly belonged to an Iranian government insider.

This report (pdf) makes clear that everything -- everything -- in the NYT story traces back to the infamous laptop. Although Broad and Sanger link to the report, their article deceptively refuses to mention the role played by the world's most notorious portable computer.

And that's a serious omission. The laptop documents have been questioned -- indeed, many would argue that they have been thoroughly debunked.

Attempting to present these documents in the best possible light, the Washington Post wrote the following back in 2006:

U.S. intelligence considers the laptop documents authentic but cannot prove it. Analysts cannot completely rule out the possibility that internal opponents of the Iranian leadership could have forged them to implicate the government, or that the documents were planted by Tehran itself to convince the West that its program remains at an immature stage.

CIA analysts, some of whom had been involved only a year earlier on the flawed assessments of Iraq's weapons programs, initially speculated that a third country, such as Israel, may have fabricated the evidence. But they eventually discounted that theory.

(Excuse me a moment. I'm going to go take the dog for a walk.)

(Okay, I'm back. Sorry. While walking the dog, I was laughing so loudly I woke up the neighbors. I think it's out of my system now.)

Where were we? Oh yes: The laptop of death -- which we may henceforward call the LOD. This response to the 2006 Washington Post story is worth quoting:

Second, all the information on this and other "shocking revelations" released over the last year and more have come from a single laptop which was provided by "an Iranian opposition group" - which in BushSpeak means the utterly nutterly Mujahedeen e-Kalqh.

I ask you, what's the chance of even a top Iranian scientist having information on adapting missiles, building a nuclear test site and uranium refining when standard security precautions would suggest compartmentalizing it?

Now what's the chance of this hypothetical scientist being allowed to keep all that information on a laptop which can be pinched by some liberty-loving second storey man, then given to another freedom-loving Iranian who then "walks in" on U.S. spooks and hands the whole thing over? All Iran's nuclear secrets just there for the asking, like Hagrid being handed a dragon's egg by a stranger down the pub.


Marcy Wheeler had a lot to say about the laptop of death. She found that much of the "evidence" available on this laptop was later proved wrong:

So that's the laptop. A set of documents with dodgy providence, the contents of which have been partly debunked in the interim period.

And we're to believe that one person had evidence of three different aspects of Iran's nuclear development program on one laptop. Having studied Iraqi WMD scientists a bit, I can think of maybe five people in Iraq who would have even had access to information from these three unrelated areas. But those people certainly wouldn't have had the blueprints for all these areas on their laptop. But hey, who knows. Maybe those "crazy mullahs" are just more loosey-goosey with their intelligence that Saddam was?

As a side note, at the same time as this laptop was first made public, the People's Mujahedeen also claimed--to apparent Franklin-AIPAC leakee Steve Weisman (link to come), among others--that Iran "had bought blueprints for a nuclear bomb." We now know, thanks to James Risen, that that blueprint came from US intelligence as part of the botched Merlin program. Which raises serious questions about where the rest of their information comes from.

(For more on the Merlin debacle, see here.)

Here is another indication that the laptop is every bit as fake as those Italian "yellowcake" papers which helped to mire us in Iraq:

Other problems with the laptop: Julian Borger reported in 2007 that everything on the laptop is in English. That makes sense for technical details, since English is sort of the lingua franca of science. But as one official put it to Borger, "at some point you'd have thought there would be at least some notes in Farsi."

Investigative reporter Gareth Porter did some follow up work. Check this out: These alleged top secret military documents contain no security markings of any kind. Official letters lack government seals.

In a lame attempt to give credibility to the LOD (laptop of death) documents in the face of this damning evidence of fraud, an IAEA official suggested to Porter that

the states that had provided the documents might claim that they had taken the markings out before passing them on to the IAEA. It is not clear, however, why an intelligence agency would want to remove from the documents markings that would be important in proving their authenticity.

The laptop came to us by way of Germany's secret service, the BND -- who got it from those wacky MEK guys, who got it from we're-not-sure-where. And the German motive for removing the classification markings would be...what, exactly?

Since these are digitized documents stored on a laptop, surely there would be a time stamp telling us when the file was created or altered.

At this point, it is important for us to pause and contemplate this tableau. Ace investigative reporter Gareth Porter, while checking out the laptop story, comes across serious evidence of forgery. Immediately, an IAEA official -- one with a view very different from that of most other IAEA officials -- comes forward and peddles (anonymously, always anonymously) a bunch of bullshit. He hopes that this bullshit will pacify Porter and make the LOD seem believable.

I'd like to know this guy's name. I want his story. Someone within the UN nuke agency has an agenda. He's out to sell something. Fortunately, most others in the IAEA ain't buyin'

I'll bet you a dozen donuts that Porter's anonymous official source is the same person who cooked up the "secret" IAEA report which was leaked to Broad and Sanger.

Crucially, and always unmentioned in reports by Broad and Sanger, the IAEA have never been allowed to keep copies of the documentation upon which the "secret annex" is built so that they can attempt to determine authenticity. IAEA officials confirmed to Gareth Porter on his recent trip to Vienna that they've been shown the originals once, and since then have had to rely upon sanitised copies provided by the intelligence agencies which produced them. Nor has Iran been provided with enough data on the contents of the Laptop and other allegations to be able to offer definitive rebuttals.

So who is behind this new attempt to foment war based on a forgery?

MEK didn't come up with this scheme -- the MEK guys would have tossed in some Farsi. Besides, they're goofballs.

CIA? Nahh. They take pride in getting things like the security seals right.

Conceivably, the LOD could have been cobbled together by one of those ad hoc groups operating out of the Pentagon. You may recall their mischief-making during the Iraq debacle.

The yellowcake fraud was amateur stuff put together by an Italian con artist. In some respects, the LOD forgery is amateurish -- but the how-to-build-a-nuke information suggests a state actor.

Frankly, I think that this thing has Mossad written all over it. The Israeli spy agency has longstanding ties to MEK. Mossad is famed for audacity -- which has, in recent times, given way to smugness and sloppiness. To me, the LOD is an obvious Mossad operation.

And for chrissakes, don't believe everything you read in the New York Times.
posted: 8:24 AM