After I wrote this diatribe against social networking tools, I decided to put matters to the test. More at less at random, I picked out the MySpace page of a young woman I've never met, who lives in another state. The goal: Find out everything I could about her, using the info on that page plus Google and some elementary-my-dear-Watson deduction. Every technique I used was quite legal.

Within about half an hour, I had this girl's entire life. I had her real name, her many photos, her place of work, her life history, her parents, her family, her home address, a picture of her front porch (by way of Google Maps Street View), her favorite drink, her schooling, her religious views, her tastes in the arts, her ambitions, her complete itinerary for that day -- and of course (since all of America's daughters nowadays feel compelled to present like mandrills), her measurements, kinks and fellatio depth. But I didn't get her telephone number, so don't ask for it.

For half a century, people have fretted about governmental theft of our privacy. That may no longer be a worry. Why should Uncle Sam steal something we're willing to give away?

Take Facebook. Facebook was funded by a "venture capital" company called In-Q-Tel, which is, or was until quite recently, a front for the CIA.

Upon reading the previous sentence, many people will scoff and make some very clever remarks about the tin foiliness of it all, even though every word of that sentence is true. (The only iffy area would be the nature of In-Q-Tel's current CIA links.) Some 200 million people post personal info to Facebook. The info is collected, collated with IP addresses, and sold to anyone who might be interested.

What does that mean? essentially, In-Q-TEL ciphers the internet in search for "systems" which can help the CIA data mine with ease. Something like myspace, and facebook, essentially gives the CIA access to trends in various demographics aswell as ... thought patterns and behaviors. 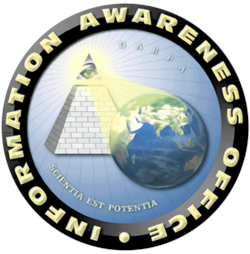 The personnel behind Facebook have all sort of interesting links to the Pentagon's Information Awareness Office.

I may have stumbled across a new variant of the Facebook trick. It's called iCyte.

Not many days ago, I received a PR release for this new free free free piece of software, which is designed to help you do research on the net. (The mere fact that a free software company had paid a PR firm aroused my respectful attention.) You can see some of the promotional material here and here.

With iCyte, anyone can simply highlight the information he or she would like to save and click the iCyte icon on the browser toolbar. Then, the data can be categorized into different projects designated by the user. Tags and notes can be added for further categorization of data, creating an easily searchable database of the information each user finds most important...

Regarding iCyte’s day-to-day uses, Foley adds, "iCyte is perfect for holding expired eBay pages, keeping blog history, organizing holiday accommodation, saving online purchase order receipts, storing and sharing student research - pretty much anything that is part of your daily internet usage." iCyte is the ideal product for college students; they can use it to store important research material for assignments, along with their own personal projects.

"Sounds pretty good," I thought. Then I visited the iCyte main page and saw the dreaded words: "CREATE ACCOUNT." Yes, you have to give up personal information about yourself. Why?

I sent that question to the PR company and received a reply from the head honcho of iCyte, Stephen Foley. I also expressed curiosity about how iCyte intends to make money with a free service.

The reason why we need your name, email address and a password is so we can hold your work product under your identity. If we did not have your login information then we would have no way of knowing who you were and what work product to show you.

There are many well known "free" web sites such as facebook, twitter and linkedin who ask for similar information.

Making reference to Facebook and Twitter was not exactly the way to get in on my good side.

The bottom line is this: If iCyte becomes a widespread, industry-standard tool of doing internet research, if using iCyte becomes second nature to one and all, then all of your research materials -- including your notes and marginalia -- will be stored not on your computer but on their computers. Not only that: All of that stuff will be available to everyone, unless you mark your project as private. And even if you do opt for privacy, the folks behind iCyte will know what you're up to, and they will be able to connect your line of research directly to your email address and your IP.

No aspect of my life is more personal than my research. Unless and until I decide to publish, I don't tell anyone about the things I'm studying, pretty much for the same reason I would not go prancing down the street naked even if I were legally permitted to do so.

I'm the kind of guy who often sits in fast-food restaurants with a stack of books on my table. The books are stacked upside-down so passers-by can't see the titles. Why? Because it's nunnayerbidness if I'm reading about Jack the Ripper, and I don't want you trying to start a conversation with me based on those books.

Go ahead; call me paranoid. Sometimes, paranoia is our friend. Over the years, I've left a shoeprint on quite a few little piggies, and some of those little piggies belonged to some mighty powerful pigs. For example, my series on Brent Wilkes attracted a lot of attention. Wilkes was the con-man "defense contractor" whose life-long best friend was the number-three dude at the CIA. Any writer who focuses on guys like that had best play his cards close to the chest.

That's why I never give out my home address to anyone, even to people who want to send me free stuff.

Back to Steve Foley and iCyte: He dodged my question about the funding. Apparently, that information is, er, uh, you know...private. All we are told is that he is an Aussie, and he has private investors who appear to be fairly well-heeled. You want more data? You're not on need-to-know.

But very soon, Foley will be on super need-to-know. He will be in a position to tell Certain Interested Americans (or perhaps A Symposium of Irritating Snoops, which comes to the same thing) just who is looking into what, all over the world.

That is, if this software catches on the way Facebook did.

"Career suicide." Look, I'm not a luddite or a technophobe. I mean, I'm using Windows 7 and you're (probably) not, so neener. But even if you scoff at my tin-foilish angst about the Cigar Importers of America, you should still think twice before you dive into the great pool of social networking systems.

The following comes from the advertising materials for a new report called The Dark Side of Social Networking, by David Gerwitz:

* Employment: how social networking can lead to career suicide

* Reputation: how something you say now could haunt you for years into the future.

* Physical security and stalking: how social networks give stalkers and other scary people an almost minute-by-minute update on your habits and haunts

As for physical risk, he says, "The potential for horror is enormous. If a criminal can easily find out where you are, what stores you frequent, what your daily habits are, who your friends are, and even what your personal food, entertainment, and beverage preferences are, you can be targeted with a level of ease never before possible."


It's not just social networking. Everywhere you go in today's society, you run into people asking too damn many questions. The first time a Frys Electronics employee asked for my phone number when I tried to buy a motherboard, I was shocked. That event occurred many years ago -- yet I'm still shocked that they asked. And shocked at myself for answering.

My brother recently lost his beloved cat and thus decided to adopt a kitten from an agency that handles such things. Given the great number of homeless pets, one would think that these agencies would be overjoyed to encounter anyone showing any interest in feline ownership. Instead, the Cat People forced him to fill out a long, long form. And by "long" I mean long -- three pages.

They asked: Do you live in a house or apartment? What's the address? Rental or ownership? Is there a yard? What is your income? Married? Children? Smoker or non-smoker? Place of employment? How many years employed? What's your credit score? How many people live on the premises? How many other animals live in that house? How many animals have you owned throughout your life? At what age did those animals pass on? How much would you be willing to spend on veterinary care per year? What sort of food will you buy for the animal? Do you travel much? Phone number? Cell Phone?

My brother reached a point where he could no longer take this nosiness very seriously. The questionaire asked: "Are there any special rules you would impose on the cat?" He answered: "Cat may not own a gun."
posted: 6:35 AM