Hillary Clinton has inspired a great many conspiracy theories. Obviously, we can dismiss most of them -- but can we dismiss all of them? Apparently, this story about Hillary Clinton, by a writer previously unknown to me, has been gaining quite a bit of attention in progressive circles. X-Files creator Chris Carter couldn't have come up with a more outlandish and intriguing scenario.

The truly stunning thing about this new conspiracy theory is that -- outrageous as it seems at first -- I cannot immediately disprove it. I should be able to, but I can't. Perhaps you can do the honors...?

The author, one Leo B. Harley, has set out to prove that a young college student named Hillary Clinton participated in efforts to cover up the 1963 murder of upcoming actress Karen "Cookie" Kupcinet, daughter of the famed Chicago columnist Irv Kupcinet. For many years, the conspiratorial rumor mills have linked this unsolved killing to the assassination of John Kennedy, which occurred a week earlier.

I know what you're thinking: It can't be. Hillary was too young.

Indeed, she was only 16 in 1963. But the cover-up extended well beyond that point. I have been able to find independent verification for much -- but not all -- of this new thesis. What follows are choice excerpts from a very lengthy, convoluted, and -- I must confess -- compelling narrative. Please note, though, that "compelling" does not necessarily mean "convincing."

This one has me torn. On the one hand, I'm suspicious (even phobic) when it comes to most Clinton conspiracy theories. On the other hand, I do have a longstanding interest in JFK material, and this writer does appear to have done his homework.

You be the judge:

On the last day of her life, Karyn had Thanksgiving Eve dinner at the Goddard home in Beverly Hills. The Goddards noticed that her behavior seemed odd: Her speech was faltering and her manner distracted. It remains unknown whether this behavior was due to emotional turmoil or to prescription drugs. Many theorize that she took pills in order to cope with a stressful situation.

According to Mark Goddard, Karyn had related a fanciful story about an abandoned baby being placed on her doorstep that very day, a tale which no doubt carried a certain symbolic truth. She left the Goddards by taxicab at 8:30, promising to call her friends to assure them of her safety...

Within the hour, Karyn was at her apartment and in the company of two other friends, writer Edward Stephen Rubin and actor Robert Hathaway. By this point, she appeared to have regained her normal state of mind. The trio watched television until she fell asleep on the sofa. After she awoke briefly and transferred herself to her room, the two men lowered the television volume and left. The time was shortly after 11:00. They went to Hathaway's home and were joined by Karyn's on-and-off boyfriend, Andrew Prine, a successful television actor. The three men socialized until 3:00 a.m.

So, at least, they told the police. The statements of Rubin and Hathaway thus provided an alibi for Prine, with whom Karyn had a tempestuous relationship.

Karyn had promised to telephone the Goddards to assure them that she was safe and in good health. After more than a day had passed with no contact, the Goddards became anxious and visited the apartment. It is worth noting that they entered without a key. Goddard said that the door just "popped open" -- even though Rubin and Hathaway adamantly told the authorities that they had locked the door behind them. (An acquaintance named David Lange had earlier tried the door and found it unlocked. But he did not enter.)

Karyn's nude body was lying on the sofa, even though she had gone into her room on the night of the 28th. The Goddards initially presumed that she had died of an overdose.

Coroner Harold Kade found a broken hyoid bone in her throat. The examination concluded that Karyn Kupcinet had died of strangulation on the night of the 28th, shortly after her friends had left the apartment.


At this point, you must be asking: Very intriguing, but what does any of this have to do with the JFK assassination and with Hillary Clinton?

For years, theorists have identified Kupcinet with an unknown southern California woman who warned a telephone operator of the Preisdent's death some twenty minutes before the event. Harley explores the evidence for this scenario, and seems to dismiss it in favor of a more complex series of events.

Kupcinet, he says (and this point is verified, in substantial part, by others) attended college in Wellesley, Massachusetts. There, the beautiful young lady was inveigled into joining a ring of gorgeous "escorts" run by LBJ's corrupt aide Bobby Baker, who used the women to help entertain VIPs. Kupcinet had two friends in this operation -- Baker's girlfriend Nancy Tyler and Mary Jo Kopechne.

In 1965, Nancy quarreled with Baker, decided to spill the beans about his illegal activities, and soon died in a plane crash. We all know what happened to Mary Jo.

After the assassination, Irv Kupcinet went scurrying after the scoop of a lifetime. The famed, extremely well-connected columnist formulated the goal of telling the true story of the JFK murder. He was uniquely well-situated to get at the truth: At some point before the murder of Lee Harvey Oswald, he put a call through to his old associate Jack Ruby, nicknamed "Sparky." In a sense, this communication both endangered and saved the columnist's life:

Had they killed Irv Kupcinet, people would connect it to the Assassination and Ruby.

While some suspect that the motive for Karyn's murder was to distract, my own sourcing suggests that the motive was to send the elder Kupcinet a message. Killing Karyn had "the added benefit of having her most prominent columnist/talk show host father, Irv, get off the Ruby case. He wouldn't be in any shape to investigate Jack Ruby or Mobsters."

I would add: He would not be able to investigate the Bobby Baker angle, about which Karyn could have provided inside information.

Early in 1965, Hillary Clinton -- who, while in high school, had already established herself as an active supporter of Republican Barry Goldwater -- entered Wellesley, where she quickly became the president of the Young Republicans. (She says that the debates over Vietnam and Civil Rights eventually caused her to switch affiliations.)... 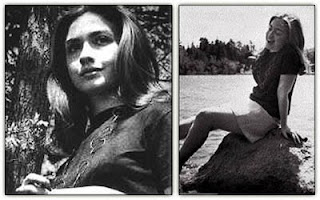 Although Hillary may not seem a likely candidate for this operation, photos from her first year at Wellesley depict an attractive, elegant, well-groomed young lady, fresh out of high school. Moreover, her commitment to right-wing causes could easily put prominent conservatives at ease. Her ambition made her trustworthy.

A Wellesley classmate, whom I will here call F, confirms that Hillary Clinton came to know an older student connected to the Baker operation -- a woman I will call K. At the time, K was widely rumored to be Hillary's first lesbian lover. Although some incautious researchers have privately linked Hillary with Nancy Tyler, these reports are almost certainly erroneous; Tyler, as you will recall, met her premature end in 1965, and I know of no evidence indicating that she had communicated with Hillary Clinton before her fatal airplane trip. K, whose full name I will be at liberty to reveal only after her death (although it has already appeared in at least one biographical study), later went on to form an even more remarkable association with John Gittinger of the CIA. She initiated Hillary Clinton into this world of intrigue, guiding her well-crafted segue from "Goldwater girl" to student radical.

The ties between the two women cannot be understood without some knowledge of the student organizations operating at that college. A sorority at Wellesley actually refers to itself, in a jocular vein, as the Secret Society. Previously, it went by other titles, although the insignia has always consisted of a skull and crossbones overlaid with a pink bow. (The pink ribbon presumably serves a humorous purpose, although, as we shall see, the effect can at times be anything but funny.) Their current web page includes the following information:

Listed activities include "TAG/Assassin" and "Spooky World trip." Again, these terms are meant to present a jovial external face to the world -- but they also hint at the darker secrets known only to the upper echelons. This inner grouping operates, in turn, within the shadowy Phi Sigma sorority.

Although I have no evidence that Clinton ever joined Phi Sigma, I do know that K was a leading member. These seemingly innocuous sororities have served as "feeders" for intelligence community personnel. The Skull and Bones fraternity at Yale (which Clinton also attended) performs a cognate function.

Thus it was that Hillary Clinton was tasked with an important assignment: She was to deliver a message to columnist Irv Kupcinet.

Kupcinet, after he had somewhat recovered from the shock of his daughter's death, had tentatively decided to return to a study of the JFK assassiantion after his old friend Jack Ruby had died of a strangely rapid cancer. (Ruby had been under the care of Doctor Louis Jolyon West of the CIA.) Another famed reporter, Dorothy Kilgallen, met with an untimely death after interviewing Ruby in 1965. A transcript of that interview has never been made available.) Kilgallen had once said, vis-a-vis the assassination, "That story isn't going to die as long as there's a real reporter alive, and there are a lot of them alive." Kupcinet considered himself just such a figure.

In 1970, Kupcinet had an unusual guest on his popular television program: Hillary Rodham, then an unknown student at Yale, later the first lady of the United States. Why did a major broadcaster in Chicago pay such undue attention to an obscure young lady from Connecticut? The more one mulls over the scenario, the less likely it seems.

In fact, a member of the Kupcinet production staff arranged for the guest spot. Hillary's appearance no doubt came as something of a surprise to the host of the show.

But the true jolt came when arrived in the studio wearing a pink ribbon.

The interview became more unnerving as it progressed. Repeatedly, Hillary Clinton made pointed and deliberate use of the phrase "That's the way the Cookie crumbles." (As you will recall, "Cookie" was Karyn Kupcinet's nickname.) Those reviewing the tape will not miss the elder Kupcinet's visible nervousness every time Hillary utters the word "Cookie."

No further words were necessary. She did not need to deliver any obvious threats. Indeed, it is very likely that Hillary Clinton herself had no awareness of the import of her words. She may not have known who or what "Cookie" meant. She was simply given a line to say, and she said it -- to devastating effect.

Irv Kupcinet abandoned his search for the truth. He never wrote another word about the JFK assassination -- not until Oliver Stone came out with his 1991 film JFK. At that time, Kupcinet sent out a message angrily denouncing any conspiracy theories touching upon the death of his beloved daughter. He was, of course, worried about the safety of other family members.

I have no doubt that Kupcinet family will continue to denounce or to detract from any objective investigation into these areas. Who can blame them? The image of young Hillary Clinton -- wearing that bow, saying those words -- probably remains forever seared into their consciousness.


Well, interesting as this thesis may be, it is hardly probative. I've heard dark rumors about the sororities at Wellesley, but I know of no hard evidence of anything truly sinister. The Clinton/Kupcinet interview is quite real. But the interpretation given here is really quite subjective -- the pink bow may simply have been Hillary's idea of couture.

Until firmer evidence presents itself, and until Harley's source comes forward, I would advise taking a cautious stance. We may be dealing with clever disinformation from the Obama camp.
posted: 1:08 AM