Larisa Alexandrovna has done some incredible work lately. An intelligence source has used her to float an interesting theory of the Bhutto assassination -- a theory whose merits I'm still mulling over.

But her dashed-off remarks on the Sibel Edmonds case are particularly intriguing...

I cannot emphasize enough the Gray (also can be Grey) Wolves or as they are otherwise known: "Bozkurtlar ." Ask what other neo-fascist organizations are similar to this one? For example, The Muslim Brotherhood.

I would also suggest that folks look up Yassin Al Kadi, as well as the scandal of BCCI: Pakistan, Turkey, Saudi Arabia... you get the picture.

So let's pick up a detail brush -- and let's start with Al Kadi. 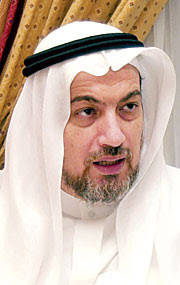 Yassin Al Kadi, or al-Qadi (as always with Arabic names, transliterations abound) is a Saudi multimillionaire whose possible ties to terror are detailed in this Cooperative Research page. Specifically, he has been linked to an investment firm called BMI which has been tied in with an extremist network. Although Al-Qadi says that his involvement with BMI was minimal, and even though BMI went belly-up in 1999...

Shortly after 9/11, the US will officially declare al-Qadi a terrorist financier

Saudi multimillionaire Yassin al-Qadi will say in an interview shortly after 9/11, “I have also met with US Vice President and former Secretary of Defense Dick Cheney in Jeddah [Saudi Arabia] when he came for a lecture organized by the Dallah Group. I spoke to him for a long time and we still have cordial relations.”

Al-Qadi also invested heavily in PTech, a firm already familiar to many of you, since it was accused of being a front for both Al Qaeda and a faction of American intelligence. The head of PTech, Oussama Ziade, confirmed that Al-Qadi spoke often -- and glowingly -- of his friendship with Dick Cheney.

There's much more, but it all comes down to this: Al-Qadi keeps denying having ties to terror, yet many continue to level that very accusation against him.

Al-Qadi admits to giving bin Laden money for his “humanitarian” work, but says this is different from bin Laden’s militant activities. Presented with this information, the US Treasury Department only says that the US “is pleased with and appreciates the actions taken by the Saudis” in the war on terror.

So how does he figure into Sibel's tale, which centers on Turkey?

Perhaps this page, which features an Online Journal article by Devlin Buckley offers a few clues:

A court in Turkey has frozen the assets of Yasin al-Qadi [1] a one-time acquaintance of Vice President Dick Cheney [2] and reported “chief money launderer” of Osama bin Laden.

Turkish investigations into al-Qaeda have been obstructed to protect conflicts of interest, financial and otherwise, among al-Qadi and high-ranking Turkish officials, according to dissenting investigators and government officials.

Al-Qadi, as the Turkish Daily News notes, “has high-level support in Turkey, with Prime Minister Recep Tayyip Erdogan going on record as saying ‘I know Mr. Yasin, and I believe in him as I believe in myself,’ when speaking to NTV on July 11, 2006.”


Al-Qadi owned a Massachusetts-based technology firm and defense contractor known as Ptech, which, according to U.S. intelligence officials who spoke to 9/11 whistleblower Indira Singh, was a “CIA clandestine op on the level of Iran-Contra.”

Moreover, according to Singh, a CBS affiliate in Boston “paid for private investigators to follow a couple of the Ptech people, and it did go to a mob-run warehouse area and the reports came back that basically it was a drop shipment place for drugs.”

Ah. Drugs. Now we are (you should pardon the expression) talking Turkey. Which is to say: Now we are getting into Sibel Edmonds territory.

Such groups, according to Edmonds, “purchase the opium from Afghanistan and transport it through several Turkic speaking Central Asian states into Turkey, where the raw opium is processed into popular byproducts; then the network transports the final product into Western European and American markets via their partner networks in Albania.”

Coincidently, in December of last year, as reported by The American Monitor, al-Qadi’s assets were confiscated in Albania, where he reportedly assisted the CIA to funnel covert support to the Kosovo Liberation Army (KLA). Such operations were reportedly financed using opium profits.


According to Edmonds, “The Turkish government, MIT and the Turkish military, not only sanctions, but also actively participates in and oversees the narcotics activities and networks.”

“We know that Al Qaeda and Taliban’s main source of funding is the illegal sale of narcotics,” Edmonds notes, adding, “we know that Turkey is a major, if not the top, player in the transportation, processing, and distribution of all the narcotics derived from the Afghan poppies, and as a result, it is the major contributing country to Al Qaeda.”