As many of you may know, 30 year-old Ciara (pronounced Kee-raa) Durkin was an openly gay Irish-American (born in Ireland) serving as an Army National Guard soldier on Bagram Airfield in Afghanistan. She had a desk job doing financial work, and in that position she discovered a financial irregularity of an as-yet undisclosed nature. Her home town newspaper, the South Boston Patriot-Ledger, thus quotes her sister Fiona Canavan:

"She was in the finance unit and she said, ‘I discovered some things I don’t like and I made some enemies because of it.’ Then she said, in her light-hearted way, ‘If anything happens to me, you guys make sure it gets investigated,’" 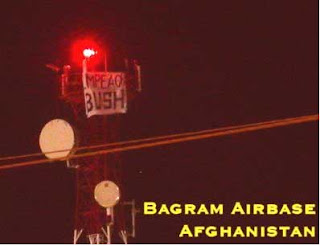 Last week, Durkin was found near a base chapel, dead of a gunshot wound to the head. Originally -- and suspiciously -- the Pentagon told the family that Durkin as killed in action; the official word now holds that her death was "non-combat related."

Just before her death, she was in a "jovial" mood while speaking on the telephone to her brother Pierce.

The family can see neither the autopsy results nor the soldier's will. The Army has not acted on the family's request for an independent autopsy.

1. A fanatic or group of fanatics killed her because of her lesbianism.
2. She was killed to cover up a serious financial problem.

I write to you on behalf of my constituent, Angela Durkin, who last week was notified that her daughter, Army Specialist Ciara Durkin, had been killed while serving our country in Afghanistan. Since the terrible news of Ciara's death became public, I have spoken with her mother and brother and my staff has spoken with other family members. Initial reports indicated that Ms. Durkin, a member of the Massachusetts National Guard, was "killed in action" but since that time, other circumstances and rumors surrounding her death at Bagram Airfield have come to the attention of her family.

As you can imagine, the confusion and potential misreporting around Specialist Durkin's death have added to what is already an extraordinarily painful time for her mother, her siblings and her extended family, here in Massachusetts and in Ireland. The Durkin family desperately needs answers to the following questions:

1. Why has the Army not responded to the Durkin family's request for an independent autopsy?

2. Why, after not responding to the family's request for an independent autopsy, did the Army fail to contact the Durkin family with the Army's autopsy results? The family was told to be available to receive a phone call between 1 and 3 PM on October 1 and the Army never called.

3. Why has the Army refused to make Specialist Durkin's will and paperwork available to her family so they can respect her wishes as they plan her funeral and burial?

While I understand that in accordance with the US Central Command policy, an investigation is taking place, I cannot overstate the urgency and importance of this matter to the Durkin family. I urge you to deploy your staff on this matter immediately so that the answers and circumstances around Specialist Durkin's death are uncovered, expeditiously and thoroughly.

Your cooperation in this matter is appreciated. Please know that my staff in Washington and Massachusetts is prepared to assist you and the Department of Defense with regard to this matter.