Yesterday, I received a copy of an email from Montgomery Blair Sibley, the lawyer representing Deborah Jeane Palfrey, the DC Madam. Sibley wrote to Leola McConnell, the Las Vegas "Domina" who claims that she witnessed a tryst between George W. Bush, then a private citizen, and Victor Ashe, W's college roommate (they were both male cheerleaders) and current ambassador to Poland. McConnell outlines this adventure and others in a book she calls Lustful Utterances. She also says that there are other witnesses to this episode, although she has not named them. 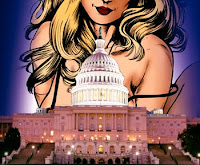 I ran this matter by Leola McConnell, who confirmed that she did indeed receive the Sibley letter. I decided not to mention the letter in public without Sibley's permission. But now another blogger has jumped the gun, leaving me free to reveal what little I know.

Perhaps Sibley hopes that a certain VIP will read these stories and get very spooked. Perhaps Sibley wants said VIP to take steps to make the charges against Palfrey disappear. Perhaps that's why the Sibley letter was leaked to a whole bunch of guys like me.

I finally caught up with the Globe story on Leola. The tabloid accuses her of smearing Bush, yet the piece itself functions as a smear of her. One of the Globe's more imaginative scribblers cobbled together some B-movie dialog from an ersatz "White House insider," who avers that Bush appeared on American Idol to combat the McConnell allegations(!), and that the trauma created by this "smear" helped bring George and Laura together(!!).

(I did not actually purchase the tabloid. If I want to throw money at the intelligence community, I'll develop a drug habit.)

McConnell, for her part, added that I sound "beltway" to her. I informed her that I am naught but an impoverished graphic designer in the L.A. area, offering clients quick turnaround time and low, low prices and free balloons for the kids. Wouldn't mind visiting the beltway again, though. They got some pitchers by that Raphael guy up in that there museum, and they's awful purty.