The demands of real life kept me away from coverage of the Gonzales hearings this morning. I understand that he cut an unimpressive figure, and that he demonstrably lied on various points. Just now, Randi Rhodes rebroadcast the most egregious example of prevarication: Gonzales said that he had discussed immigration policy with Carol Lam, when all other sources (including Lam herself) testify to the contrary. 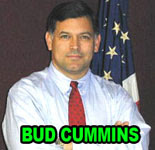 Let us now focus on a lesser known aspect of the Great Prosecutor Purge -- the firing of Bud Cummins of Arkansas, which is related to the firing of U.S. Attorney Todd P. Graves of Missouri.

Brad Friedman has some dug up some interesting facts which link the Cummins affair to Karl Rove's good friend, Thor Hearne -- head honcho of a fake group called the American Center for Voting Rights.

As you know, Brad has exposed ACVR as a fraudulent group. ACVR promulgated Rove's drive to tighten voting identification requirements and thereby keep poor people from the polls. The less-affluent often do not possess multiple ID cards -- or they may possess a diver's license with an address differing from their current residence, which is just the sort of problem Republican thugs use to challenge a person's right to cast a vote.

So how does this relate to the firing of Bud Cummins? Well, it seems that the mighty Thor also runs a law firm called Lathrop & Gage, which had aroused the respectful attention of prosecutor Cummins. Why? Here's Brad:

Media reports from May of 2006 [4], describe a corruption investigation by Cummins' office into MO Gov. Matt Blunt's use of the Missouri lawfirm Lathrop & Gage LC to run a chain of satellite state licensing offices.

The first reports of Cummins' investigation into the Blunt/Lathrop Gage scandal were apparently in May of 2006. Cummins was removed from his position just afterwards in June of 2006 --- prior to all the other firings which took place later that year on the same day in December.

He was replaced at that point with Karl Rove's personal aide Timothy Griffin.

I can't underscore enough Hearne's highly placed position as a White House operative, as the man behind the GOP's entire, systematic and well-financed "voter fraud" scheme/initiative (which has played directly into several of the other firings), his longtime efforts on behalf of and under the direct employ of MO Gov. Matt Blunt (son of the powerful GOP minority House Whip Roy Blunt), his position as a top attorney in the Republican National Lawyers Association (singled out by Rove during an April 2006 speech to that group of Republican election attorneys), and of course, as the national general counsel for Bush/Cheney '04 Inc.

It seems to reason then, that the Cummins investigation into Blunt and Lathrop Gage's questionable handling of those satellite state offices --- for profit --- would definitely have triggered alarm bells in the White House. Someone needs to inquire along those lines.

So how does this relate to the firing of Missouri's U.S. Attorney General, the fellow with the morbid (especially if you know some German) name of Todd Graves?

Put on your wading galoshes, folks -- we're about to trudge through some waist-level gunk.

Here's a bit from a piece I wrote for another site:

A January 9, 2006 email from Kyle Sampson (chief of staff for Attorney General Alberto Gonzales) indicates that Graves was "axed" to leave. His name was on a list of ten U.S. Attorneys who were to be purged. Unlike eight of the ten, Graves left voluntarily and segued into a job at a Republican law firm.

Basically, two multi-million dollar state contracts -- generally regarded as patronage plums -- went to Graves' wife and brother-in-law. This situation meant that Graves would have little motive to investigate any wrongdoing on the part of Missouri's Governor, Matt Blunt.

Blunt made sure that lucrative fee office contracts went to Grave's wife. In the eyes of a cynic, this might be viewed as a pay-off.

As we shall see, quite a few people in the "Show Me" state consider Governor Blunt to be -- how to put this? -- "ethically challenged." He thus had every reason to stay on a friendly basis with federal prosecutors. As a general rule (not naming any names), we can say that stuffing state cash into wifey's purse might be considered one way to keep a prosecutor smiling.

When Cummins started looking into this morass, the DOJ had a problem. If Graves had gone down in the midst of a scandal, he might well have taken the Governor with him. Powerful interests may have decided that it was best all around for Graves to resign suddenly and to take a cozy sinecure in the private realm.

Thus, Graves was "axed" to leave. His replacement: A Voter ID zealot named Bradley Schlozman. Thanks to the Patriot Act, Schlozman did not need Senate approval. If he had been forced to undergo the approval process, his inexperience might have prevented him from scoring the gig.

the firm that (man, where do I start), represents the Governor's campaign, hired another lawyer to directly contact Cummins, set up the fee offices in the first place, loaned the administration one of its lawyers, Kurt Shaeffer, for a while to defend Feelya Ferrell, and hired the Governor's sister.

(Emphasis added.) This Kansas City blog refers to Amy Blunt, the Governor's sister, as one of the best-connected Republicans in the state. The Fired-Up Missouri blog has much in-depth reporting of Blunt and the ongoing fee office (and related) controversies.

Blunt has hired a private attorney -- from Lathrop & Gage, natch -- and his campaign's financial report indicates that Blunt may have paid for these services with campaign funds, a violation of state law. (A candidate may not make personal use of monies raised for campaign purposes.)

And that's not Blunt's only problem:

The scandal may have already led to the middle of the night resignation of Department Director Julie Eckstein, as well as a wrongful termination lawsuit filed by a whistleblower who refused to go along with plans to cover up the illegally spent funds. Last week State Auditor Susan Montee released an audit that details some of the wrongdoing within the department.

It appears that this may be the second time this month that Gov. Blunt has attempted to cover up wrongdoing in his administration. Having learned his lesson from the Ferrell scandal, Blunt should fess up and tell Missourians how long he’s known about this wrongdoing, whether his office directed records to be destroyed, why he didn’t say anything about it, and whether or not this is the reason his department director resigned.


Is this just a state-level controversy? No.

Always keep in mind: Missouri is a "purple" state. This state may well make all the difference in 2008.

Blunt, Rove and his buddy Thor surely understand this -- that's why the Republicans tried so desperately to get a photo ID voting law passed in that state. Fortunately, the State Supreme Court struck that law down in October of 2006, and the Graves/Schlozman lawsuit against Missouri Secretary of State Robin Carnahan failed. (The Republicans did not have Carnahan in their pocket, so they wanted to get rid of her. As you will recall, something similar happened in California.)

It's up to you now, folks. The firings of Lam and Iglesias are well-known, and properly so. But the Bud Cummins story deserves much more scrutiny. After all -- he is the guy who seems to have "inconvenienced" Thor Hearne, Karl Rove's good buddy. So please do what you can to get progressives and others talking about this matter...