For quite a while now, I have received, on a daily basis, some highly unusual messages in my inbox. (If truth be told, most of them have to do with business opportunities in Africa.) But I may never have received a message quite so unusual as this one, sent via an anonymous remailing service:

I have had the unusual privilege if it can be called that of seeing Ann Coulter in the nude. In fact I have photographic proof of the encounter. I do not expect you to believe me especially since the photo does not contain her face but rest assured that this is real and all other features such as hands etc should match. I can also assure you that I was made fully aware, what shocked me were her comments about john edwards hence the reason I send this to you.

I present his photo here for what it is worth, and I apologize beforehand for the graphic nature of this image. (Clicking on the picture should reveal a larger version -- and before you dismiss too quickly, please scroll down to the other photos.)

Obviously, without the facial features, this image is nearly worthless as evidence. I have presented the image "as is" without attempting to smooth over the jpg artifacts, which, unfortunately, may hide some telling details. The general morphology, and the veins visible in the hands and arm, do match other Coulter images. The picture would appear to have been taken with a digital camera in a diffused, low-light situation. Beyond that, one can say no more.

Based on such "evidence" -- if it can be called evidence -- one can hardly conclude that Ann Coulter is a hermaphrodite. Of course, others have discerned what some consider sexual abnormality in Coulter's appearance and demeanor. You have no doubt already seen the image below, displaying what appears to be a very male Adam's apple. 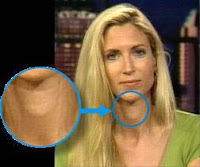 Again, I consider the data insufficient. Even so, we must ask the question: If Coulter were a hermaphrodite, what characteristics should we expect to see?

Wikipedia informs us that there are, in essence, two forms of hermaphroditism which may appear in human beings:

Alas, we find in this description nothing about the likelihood of a single individual possessing a penis, a vagina, and an Adam's apple. 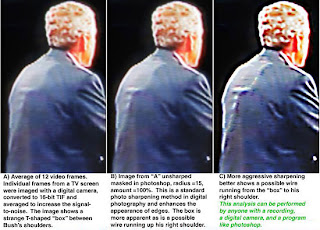 I did not know how to proceed further with this investigation until I recalled the most intriguing development of the "Bush bulge" controversy, for which this blog was once well-known. As some of you will remember, NASA photo analyst Dr. Robert M. Nelson performed simple, standard photographic enhancements of the strange bulge on Bush's back, as glimpsed during the debates of 2004. His work revealed the unmistakable outline of a still-unexplained device beneath Bush's suit.

The great scientific advantage of Dr. Nelson's presentation is that he reveals his methods, and asks for his work to be replicated. I have therefore attempted to use similar techniques to uncover the truth about Ann Coulter.

We may refer to these photos as the "Coulter bulge."

Before proceeding, I ask any readers who suspect that I am dealing with altered original photos to compare the unenhanced images to the versions available at this Ann Coulter photo gallery, which appears to be the creation of a Coulter fan. You will see that the jpgs are essentially the same. In the enhanced close-ups, I have simply attempted to apply techniques similar to those employed by Dr. Nelson. Any reader with Photoshop is invited to use the same techniques.

The first example uses what I call the "yellow slacks" image: 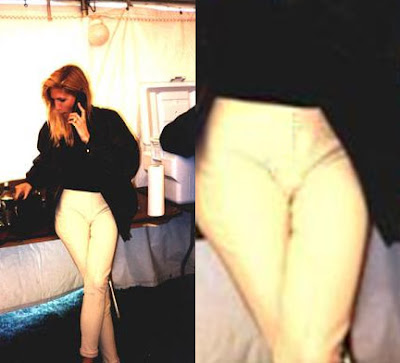 As you will see, I did not have to apply the sharpening tool very aggressively to discover a shape that I had already suspected was there. (Before using the "sharpen" tool, I did apply a minor blur to soften the jpg artifacts, as is standard procedure when enlarging a small image.) 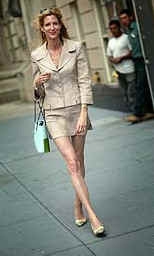 Our second example has been noted on these pages before, and has also appeared in on other sites. Unfortunately, the larger versions of this image which were once available have all disappeared (mysteriously?) from the net. When I enlarged the version here, the jpg artifacts were so pronounced as to render any enhancement techniques useless. Still, this photo did engender quite a bit of comment when it first made the rounds.

If any reader has a clearer copy, please let me know.

Finally, and most interesting of all, we have a high school photograph of Ann Coulter, originally published by a classmate.

Photographic enhancement proved surprisingly effective in this instance, although the unenhanced original shows the telltale "bulge" signature apparent in most other photographs of this area: 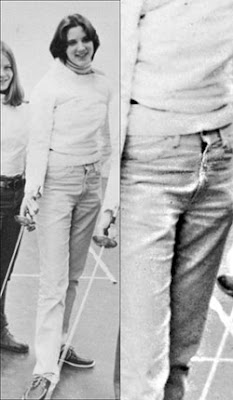 At the end of the day, am I convinced that this photographic evidence proves that Ann Coulter is a hermaphrodite? Hardly. Indeed, I believe that the preponderance of the evidence leads to the opposite conclusion.

Even so, one may posit that the deep-rooted gender confusion issues occasioned by hermaphroditism would go some ways toward explaining Ann Coulter's unusual stance toward gays -- befriending Matt Drudge yet insulting John Edwards as a "faggot."

I ask the readers, especially those with expertise in photographic analysis and/or gender issues, to continue this research.

Ultimately, we will not know the answer with any certainty until we receive a statement from Coulter herself. Perhaps someone can ask her to clarify this issue next time she appears on a listener call-in talk show.

The time has come for Ann Coulter to tell all doubters that she is wholly female and has been so since birth, despite appearances.
posted: 7:04 AM