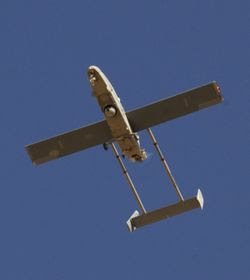 In April of 2006, a platoon of American soldiers in Iraq, unable to find the man they were looking for, decided to capture and to kill an innocent man named Hashim Ibrahim Awad. The murder came to light only because a guilt-ridden soldier made a spontaneous confession.

This Wired account (which I first learned about by way of Xymphora) indicates that the soldiers staged a bogus incident near a bomb crater for the benefit of the nearly omnipresent unmanned aerial vehicles (UAVs) patrolling the area. The deception was designed to create the appearance of a firefight with a bomb-planting insurgent.

The story, stunning enough in its own right, casts n interesting light on the infamous Zarqawi video, in which the alleged Al Qaeda mastermind is seen staging maneuvers in the Iraq desert. The video is here.

The Bush administration trumpeted Zarqawi's death not long after the release of that controversial video, which shows him leading men and operating rather heavy weaponry. A few wags have suggested that the Iraqi desert behind Zarqawi looks an awful lot like California. We have reason for captious suspicion: The Washington Post revealed the existence of a psyop campaign designed to create a Zarqawi "myth," and Bush himself once cited a "Zarqawi" letter even after it was acknowledged as a fake.

My question is simple. If UAVs were so ubiquitous when Awad was killed, why did they not spot Zarqawi in the desert?

Perhaps someone with better knowledge of how UAVs are used in Iraq can help us resolve this seeming contradiction.
posted: 5:15 AM