(Thanks to HamdenRice of DU for the heads up.) Fox, it seems, still hopes to portray Republican Mark Foley as a Democrat. We've already shown you one example. (Scroll down.) Here are two more: 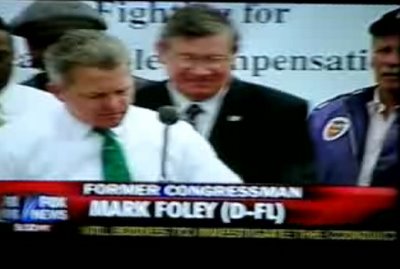 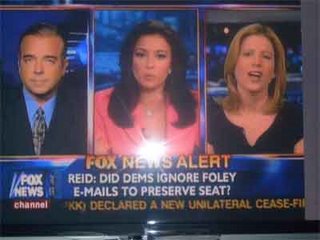 The above image should go down in history as the single most infamous moment in political journalism. Harry Reid is, of course, in the Senate -- and has nothing to do with this mess. How can the three talking heads pictured above live with themselves?

To be fair, a surprising number of news stories identified Foley as a Dem before the scandal broke.

You may also derive some amusement from this screenshot (from this site): 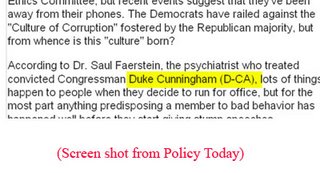 Back to Foley. You may be interested to learn what his fellow Floridian Katherine Harris has to say:

In an interview with WESH Channel 2 in Orlando, Harris said, “if anything, the Republicans didn’t know about these issues and we’re going to be very anxious to find out who in the media and on the other side of the aisle (Democrats) knew about it and kept this from the public interest, because our children were at stake.”

Of course, the Republicans knew about "these issues" all along, and kept the Democratic member of the page oversight board completely in the dark.

FOX will probably claim that these serial misidentifications were 'just an accident.' Back in 2004, the Kerry "metrosexual" smear was also just an accident. Remember how the Soviets would crudely alter old photographs to eliminate any visual reference to Trotsky? That too was just an accident.

(This week's unforgivable pun: Why don't congressmen use bookmarks? Because they like to bend over pages.)
posted: 11:44 AM