The whiff of war pervades the air, and we all know what the first casualty is. emptywheel at the Next Hurrah notes that

...Judy is back on the Neocon payroll (or at least some faction thereof), and that John Bolton is pursuing regime change. And that, by association, Judy got her toes wet on the Iran warmongering at the same time as her former speakers bureau, Benador Associates, started placing outrageously fraudulent stories to justify a war.

The reference is to Amir Taheri, the guy behind the recent propaganda yarn that Iran had passed a law to make Jews wear identifying insignia. From Greg Sargent at The Horse's Mouth:

Meanwhile, Amir Taheri, the fellow who penned one of the original stories, has posted a press release on the site of his rep Benador Associates that is anything but a mea culpa. Taheri seems to be standing by the story, though he concedes that his "column was used as the basis for a number of reports that somehow jumped the gun." He doesn't address the small problem that the law appears to have made no mention of religious minorities, only saying that his "sources" are telling him that the ideas of special markers for followers of Judaism, Christianity and Zoroastrianism are "being discussed," though we're not told by whom.

Obviously, Taheri still hopes to convince the gullible that his fiction is factual.

Here is the web page for Benador. And here is a very revealing quote about Benador from the Asia Times of August 15, 2003 : 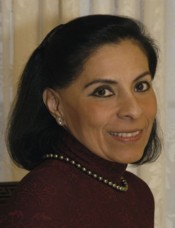 When historians look back on the United States war in Iraq, they will almost certainly be struck by how a small group of mainly neo-conservative analysts and activists outside the administration were able to shape the US media debate in ways that made the drive to war so much easier than it might have been… But historians would be negligent if they ignored the day-to-day work of one person who, as much as anyone outside the administration, made their media ubiquity possible. Meet Eleana Benador, the Peruvian-born publicist for Perle, Woolsey, Michael Ledeen, Frank Gaffney and a dozen other prominent neo-conservatives whose hawkish opinions proved very hard to avoid for anyone who watched news talk shows or read the op-ed pages of major newspapers over the past 20 months.

New York-based Benador Associates is less than two years old, but has a star-studded client roster of 38 people, most of them Middle East specialists. Benador estimates that she arranges for her clients each week between 15 and 30 interviews on US and foreign television. In the same period, she places an average of about five op-eds by them in the most influential newspapers, such as the Times, the Post, the Wall Street Journal and the Los Angeles Times.

She acquired that kind of clout in two years? Such things do not happen by accident. Hard work alone won't do the trick. This woman is connected. I would bet that someone else -- some larger organization -- set up Benador.

Her husband, you may be intrigued to learn, is a Swiss art dealer. I don't yet know his name, but I feel fairly sure that he owned the Galerie Benador in Geneva. He may be Emmanuel Benador, the Picasso expert. If that guess is correct, then perhaps Arianna Huffington -- who wrote a book about Picasso -- can tell us more about the Benadors.

I wonder if Eleanor made her initial connections with neocon "parapoliticians" (if I may be allowed such a term) via her involvement in the art world?

Incidentally, another Benador-linked neocon is the well-known propagandist Laurie Mylroie, who co-wrote a book on Saddam Hussein with Judith Miller. Dr. Barry Rubin, the proprietor of the Middle East Review of International Affairs (often considered a MOSSAD front) is also in the Benador orbit.