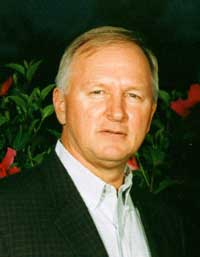 I've not written much on the rapidly-metastisizing scandal involving Brent Wilkes and the hookers. To sum up: We have indications that the prostitution ring, or sting, goes back for a decade or more. We have seen the allegation that Porter Goss, now the DCI, was either snared by this ring or helped to mastermind it. Goss has denied any involvement.

We even have a "John Netley" of sorts (Ripperologists will catch the reference) in the form of Christopher Baker, the guy who somehow managed to start the Shirlington Limousine Service, and somehow managed to get an ultra-hefty Homeland Security contract, despite having an impressive rap sheet. Baker was Wilkes' driver.

The bit that really jumped out at me occurs in Ken Silverstein's instantly-famous article "Red Lights on Capitol Hill?"

Actually, there's a lot more to say. If we presume that these congressmen were just a bit smarter than Lyndie England, and that they knew better than to take incriminating photos of themselves (and then allow the snaps to fall into the hands of outsiders), we must ask: Who took these images, and under what circumstances?

Those who do not learn from history...

One historical nugget I keep mentioning in this blog concerns Xaviera Hollander, the New York City madam credited with writing The Happy Hookerin 1971. The co-writer (ghost writer?) of the book was Robin Moore -- an odd choice, since he usually specializes in military and intelligence matters. Anthony Summers, in his Nixon bio, tells us (in a footnote!) that, according to Moore, the CIA had set up clandestine cameras in Xaviera's bedroom, in order to get blackmail material on Washington pols and visiting Arab potentates.

The Arabs requested non-Jewish girls. At the time, nobody knew that Xaviera was Jewish (on her father's side).

The Moore/Hollander book contains a chapter in which Moore himself receives credit for having set up the hidden cameras in Xaviera's bedroom -- for "research" purposes. Obviously, that excuse is absurd. Just as obviously, the real reason this book received such widespread publicity was to let certain parties know that embarrassing photos existed -- and to let them know about Xaviera's heritage.

And that (I believe) is how America managed to keep one generation of Middle East leadership under control.

If the same trick worked once, why not keep working it?

At one time, people might have scoffed at the suggestion that Wilkes is "spooked up" -- but now, everyone who has studied the matter must understand that we are dealing with no mere crook. Wilkes, like Poppy Bush, has long been an Agency-friendly businessman not formally employed by the Company. His first real job was with the World Finance Corporation, a CIA-connected money laudromat which had its origins in the anti-Castro Cuban milieu.

I talked to someone who knew Brent and Dusty back in their high school days. According to my source, the two were obsessed with gaining power -- even then. What better way to accomplish that goal than through a little blackmail?

Footnote: As several readers have pointed out, the original WSJ piece did specify that female prostitutes were involved, as did a number of subsequent articles. Since the sting seems to have netted a number of pols, I do not think the presence of women invalidates my previous speculation about Cunningham. I honestly believe that the guys at the Washington Blade may have been on to something. There's a pun to be made out of the preceding sentence, but I won't make it.
posted: 6:36 PM