It finally happened! Cy Vance has Trump's tax returns! And that's not all. The investigation into Steve Bannon is gaining steam as well, and Donald Trump Jr. has been deposed in the inaugural funds "misplacement" case.
That said, we still have a couple of reasons for cynicism. A lot of people don't trust Cy Vance, who has been notably unconcerned by Trump's various perfidies in years past.
More importantly, why is Trump still making ambitious plans for the future? As Esquire magazine used to ask: Why is this man laughing? If he's as doomed as doomed can be, he should bloody well act doomed. Does he know something we don't about Vance? Or has Trump gone into "Hitler in the bunker" mode, admiring huge models of triumphal buildings he'll never erect?
When it comes to possible federal charges, Michael Cohen believes that Trump has issued himself a secret pardon, and that he will play that card only when it needs to be played. If so, the feds would be well-advised to depose Trump ASAP in order to get him on perjury.
(Side note: I really like Cohen's "Mea Culpa" podcast, especially the opening segment in which he wraps up recent events in the news. He always seems so EXCITED! And ASTOUNDED! By everything that HAPPENS!)
Did Trump pardon any crime he may ever have committed throughout his entire life? Can he also extend such a sweeping pardon to the Trump organization and to members of his family?
Apparently so. We must find some way to reign in the pardon power.
Another question: How can Trump prove that that such an all-encompassing pardon was in fact issued before he left office?
Fortunately, the "secret pardon" gambit can extricate Trump only from federal charges. The state charges are a different matter.
Still another question: If the documentation proves beyond all doubt that Trump has committed criminal acts -- such as bank fraud or tax fraud -- will he still have a wide enough political base to stage a comeback? In other words: What does it take? When will the MAGA morons finally give up on this guy?
I'm a little sorry Trump is no longer on Twitter. His incoherent screams of rage-gasm must be glorious.
On another topic: In this famous photo, why does Melania look like she's on the verge of orgasm as she leans in toward Epstein? 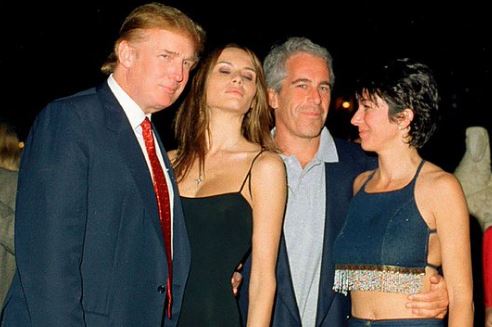