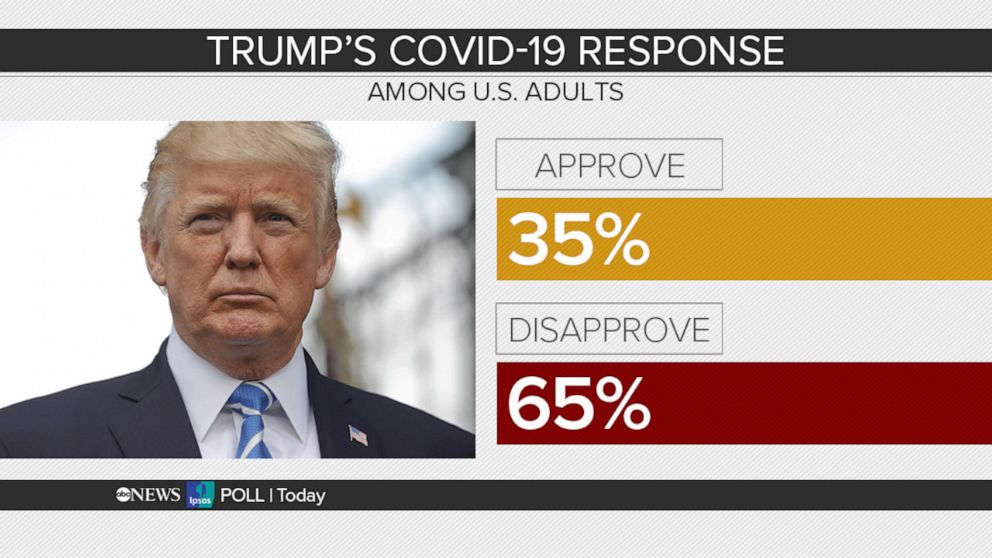 Trump continues to have low approval ratings for his handling of the coronavirus crisis. ABC/Ipsos puts him at 35 percent. I'm stunned that the number is that high.

Although my own views about the virus have been characteristically eccentric, I always understood the need for widespread testing -- better testing -- as well as the need to produce massive amounts of masks and other equipment ASAP. A WWII-style effort was required, but Trump didn't enact one. He never really committed to any strategy. Instead, he constantly bounced between his own inclination toward germophobia and his followers' inclination to take a fuck-the-roolz attitude.

Even if you hate what I've written on this topic, you might appreciate what "D-Jay" has to say. The words below the asterisks are his.

Seeking, as he always does, to avoid any responsibility for his failures, Trump likes to call Covid-19 the China Virus. Everything bad that’s happened is China’s fault, he wants us to think.

Nothing to do with him.

Unfortunately for Donald, however, he let his narcissism and infantile need for adoration overcome his common sense and actually conducted some 18 on-the-record interviews with none other than Bob Woodward, the journalist tiger shark of Watergate fame.

As if that wasn’t bad enough, he let them all be put on tape for posterity – and public distribution. Thanks to that, we have now heard – in Trump’s own voice – that he knew exactly how deadly and contagious Covid-19 really is back in early February.

And what did he do with that knowledge?

Did he immediately order a lockdown?

Did he ramp up production of desperately needed PPE?

Did he insist on a wide-spread and effective test-and-trace program?

Did he mandate the wearing of masks and social distancing?

Of course he didn’t. This is Donald Trump we’re talking about.

He spent the next few months pooh-poohing the whole thing and implying that anyone who wants to wear a mask is a Democratic Party loving pansy. Then – as now – his only priorities were protecting the stock market and promoting his own re-election prospects.

Time, perhaps, to rebrand the “China Virus” with a more accurate title.

Mind you, the virus did start in China and that country’s initial handling of the matter left much to be desired. So let’s leave them with the first two letters – “C-H.”

By the end of January, however, China had largely gotten its act together – ultra-strict lockdowns, hardcore travel restrictions, a massive test-and-trace effort, universal masking and sharing (at last) of key data with international health organizations.

From then on, pretty much everything bad that happened, at least in the States, is down to Trump.

An economy in shambles.

A population divided and confused.

U.S. standing in the world destroyed.

So let’s take the “ump” out of Trump and add it onto our East Asian “Ch.”

A perfect Trumpian term, don’t you think? Matches up quite well with “sucker” and “loser,” two of his favorites.

And if you are one of the deluded 40% who still believe anything at all that comes out of Trump’s oddly shaped pie hole, let alone vote for him, that’s what you are – a “sucker” and a “chump.”

That’s how Trump would think about it.

Let’s hope that come Nov. 4th, we will also be able to call you - and the grifter god you worship - “America’s biggest losers.”
posted: 1:05 PM