Watch the above, if you've not yet seen it. Moving. Brilliant. And I love the way she dealt with the orange elephant NOT in the room. If I had a daughter, I'd want her to be like Meghan McCain.

Following the trail blazed by this NYT article, I would now like to compare McCain's America to Trump's America. Let's take a look at what the Trumpers and Q-razies have said about John McCain -- whom they call "John McStain."


Hours before his death, Republican Kelli Ward, a Senate candidate in Arizona, claimed the McCain family’s announcement that the senator was ending his cancer treatment was timed to take attention away from her.

Here is a very brief summary of the view from Q:


The President of the United States executed a sitting Senator by way of lethal injection(after a secret treason trial) and covered it up by letting that Senator claim he had cancer. #Qanon 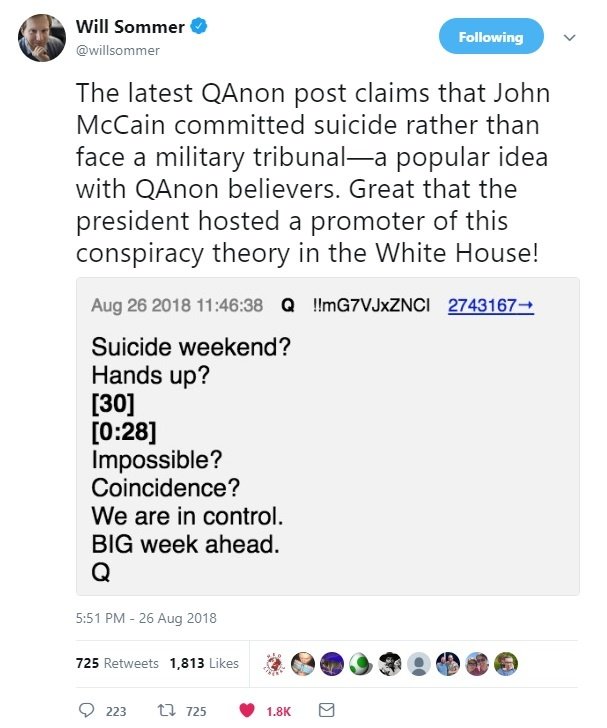 
How does John McCain fit into all that? Obviously on the side of the demons, since he blasphemed against Trump. And since Trump adopted the cute trick of "politely" not referring to McCain by name, a lot of Q believers refer to him as "he who is not named." He's no Voldemort, though -- they could name him, but prefer not to. But definitely an enemy and guilty of very bad things -- mostly being part of the Deep State and opposing Trump while voting for the tax cut and war stuff.

McCain never had cancer, either. Instead, all that "cancer" talk was simply McCain laying the groundwork for his eventual suicide, so he wouldn't be taken off to Guantanamo, subjected to a military tribunal, and executed for his crimes (no, they don't explain why anyone would bother with such elaborate fakery when he could also just shoot himself then have a doctor say he "fell and hit his head"). Q even hinted McCain had committed suicide, so there's the proof you need.

Here's a Q-ish piece of detective work from last November:


The theory that John McCain is wearing a medical boot to hide his ankle monitor as a criminal defendant just got legs. His Achilles tendon injury (the reason he's allegedly wearing the boot) seems to have magically switched legs.

From Q himself (itself) (themselves), we get the following example of Sherlockian logic:

The endlessly emetic Alex Jones offers this summary of the McCain legacy:


Alex Jones explains the true character of the late John McCain, a notorious Deep State neocon who sold out the U.S. to ISIS, the ChiComs, and the big banks

You may want to check out the comments appended to this video by a Q cultist. (I have not seen the actual video, but I'm sure it's just lovely.)


Just sick seeing our flag flown at half mast for no name. Wondering, was flag lowered when Benedict Arnold died?﻿

These arrogant elites/ get elected by telling LIES!! And then go on to sell us out for / THERE OWN WEALTH! F- off mc- stain and your family!!! Same thing w/ the deep state / both sides/ corrupt politicians!! Just go out and vote November!!! Non rinos/ non corrupt/ long term evil politicians// dig/ research!! Vote conservative republicans November!!! Our country depends on it!!!﻿

The McCain Institute is no different than the corrupt Clinton Foundation.﻿

This might sound cold, but I'm guessing No Name made his own exit so as to avoid life in Gitmo. As far as I'm concerned, that traitor did not die with honor in any sense of the word. Thank you for this post. You've made Q's work a lot easier to understand.

I know this is harsh/ but I truly hope / he who will not be named/ family is shamed forever! Wife/ daughter/ all/ you are complicit!! In the corruption of what Was JOHN MCSTAIN.. I'll never type his again/ may your family hide in darkness for the sins of your father!!! Find his ass/ exposing the corruption/ for $$$$ / find his ass patriots/ veterans!!

I regret the fact that he didn't stick around for us to see him get prosecuted and put in Guantanamo. Instead, lots of people think he's a hero, but he's the biggest traitor our nation has ever seen.﻿

As a veteran, I am completely DISGUSTED by McCain. Good riddance to a TRAITOR!﻿

I don’t think he’s dead. Maybe he beat her to a deal in lieu of the death penalty...for now...and he’s now at Guantanamo. Didn’t troops just go there days before his “death”. He turned on her and because he knows that anyone that goes against her and her family ends up dead he made a deal to fake his death.

Songbird was an Evil Traitorous Man. I saw another Article the other day implying he had a fondness for young boys (Trafficked) as well. Thank you PM for sharing this post. God Bless. If this Vermin is Truly Deceased I'm fairly positive he's in a very Warm place now Truly Deserved.﻿

I believe he took ‘the easy out’ because the boom was about to dropped connecting him to a lot of dirt.

And now, this coverage of the funeral...


The only way I would watch this, is if the entire thing went up in flames. Fuck that POS traitor scumbag. The fact that Uncle Fester, Schumer is talking him up, should tell EVERYONE exactly how big of a piece of shit McStain actually was. Good fuckin riddance. It didn’t come fast enough and the POS could have taken some of traitor buddies with him.

I’m only sorry that he won’t be buried in Arizona. He’ll be buried too far away for me to properly “christen” his grave! Be sure to bury him deep to kill the stench…


Only a pure scumbag would have a pedophile give their eulogy. That 1 fact, should tell EVERYONE just how big of a scumbag McStain actually was. If he had a pedo give his eulogy, you can bet your ass he was a pedo too.

The towering intellectuals at Godlike Productions are typical Trump enthusiasts:

What the hell has happened to this country?
posted: 3:16 PM