From the new Woodward book (allegedly): 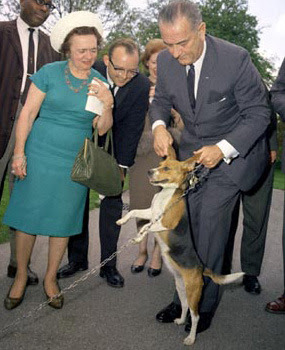 "Flicking his ears"? You mean a discorporeal President Johnson is literally trying to treat Trump like a dog? If this is true, I take back every unkind thing I ever said about LBJ. Vietnam is forgiven.

Alas, there are signs that this excerpt is a hoax. Even in these days of lax standards, I doubt that any major publisher would tolerate "past President's" and similar errors. Still, I think we should spread the story anyways, to compensate for the outrageous nonsense published about Hillary.

On a related note: The Capitol Building is allegedly haunted by an entity known as the Demon Cat, affectionately called DC. He appears to guards in the dead of night, originally taking the form of an inoffensive feral feline, mewling its way through the bottom floors of the building. But if a guard should approach, the normal-sized cat will suddenly grow and grow, reaching a the size of a Sabre Tooth. Just before the beast sinks its fangs into the observer, it disappears.

The Demon Cat is said to appear just before a national tragedy. Does anyone know if he made himself known on the evening before January 20, 2017?

Seriously, on Fear: This.


The Washington Post, which obtained a copy of the book, reported Tuesday that former Trump attorney John Dowd arranged a mock interview for Jan. 27. As Dowd rattled off a series of questions about the investigation into Russian interference in the 2016 election, Trump reportedly stumbled over his answers and contradicted himself.

“I don’t really want to testify," he concluded, according to the book.


Dowd then explained to Mueller and Quarles why he was trying to keep the president from testifying: “I’m not going to sit there and let him look like an idiot. And you publish that transcript, because everything leaks in Washington, and the guys overseas are going to say, ‘I told you he was an idiot. I told you he was a goddamn dumbbell. What are we dealing with this idiot for?’ ”

“John, I understand,” Mueller replied, according to Woodward.

Later that month, Dowd told Trump: “Don’t testify. It’s either that or an orange jumpsuit.”


No denial from Dowd yet. Of course, the day is young.


Trump once told Rob Porter that Jeff Sessions was a "traitor," Woodward writes.

Mocking Sessions's accent, Trump added, "This guy is mentally retarded. He's this dumb Southerner. … He couldn't even be a one-person country lawyer down in Alabama."

And, of course, this.


Days after the nation mourned the death of the Arizona senator and Vietnam war hero John McCain, there are new bombshell disclosures about the depth of Trump’s disdain for the man. Woodward is reported to describe a dinner at which Trump told senior White House officials that McCain had been cowardly in getting himself released early from a Vietnamese prisoner of war camp.

The defense secretary, Jim Mattis, had to correct the president by pointing out that the truth was in fact the direct opposite – McCain had refused an offer of early release from his captors, out of solidarity with fellow prisoners.

Perhaps the most disturbing element of the Post’s rendition of Woodward’s book is the alarm it portrays among top national security officials about Trump’s lack of grip over world affairs. After one high-stakes meeting in January of the National Security Council over the North Korean missile threat, Mattis was so exasperated he told associates that the president had the understanding of a 10-year-old schoolchild.

Top officials plot among themselves, the author writes, in a collective effort to thwart Trump from carrying out his more outlandish desires. Senior officials swipe documents from the president’s Oval Office desk so that he cannot act on them.


Also, note this from Rick Wilson.


When I was a young aide in the DOD, Bob Woodward was working on "The Commanders." Look up "Mike Dugan" and Woodward. I've seen this UP CLOSE. Imma tell you something; unlike some people, he records these interviews. He grinds and grinds and grinds. Prepare for a WH purge.

Oh, goody! I've been waiting an awfully long time to hear the actual recording of Bill Casey wheezing the cryptic words attributed to him at the end of Veil.

A final note: Contact your senators about the Brett Kavanaugh confirmation. I don't think his appointment to the Supreme Court can be stopped, but we must try. History has her eyes on us. Even as we speak, the proceedings are devolving into a debacle -- as well they should.
posted: 2:03 PM