Update: DAMN! That's Peter Strzok forcing Trey Gowdy to chow down on his own ass. I may be a cynic, I may be a man without heroes, but...DAMN!

(We now return to this morning's post as originally published. The Rachel Maddow clip has been moved downward.) 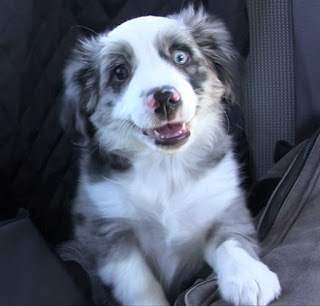 Meet Charlie! This blog's current canine mascot is an Australian Shepherd puppy named Charlie, who is less than three months old. A friend gifted him to us. This dog's specialty is chewing everything he sees into sub-molecular particles. And I mean everything: Wallets, shoes, books, headphones, cars, trees, national monuments, meteors, abstract concepts... If I dangle my right arm within range of those fearsome teeth, that arm will soon look as gruesome as any shot in Passion of the Christ. Don't let that cute face fool you: This guy's a killer.

But how can we stay mad? Look at those eyes. One blue, one black. Awwwwww!

And now, let's turn from Awwwww to The Awful. That's my new name for each day's news: The Awful.

Trump wants out of NATO.
How can anyone see this story and not admit that Trump is Putin's plaything? The ramifications are historic and horrific.

The military spending targets demanded by Trump are absurd -- deliberately so. Donnie and Vladdie know that the European nations will never go for a proposal to raise military spending to four percent of GDP. Doing so would be ruinous: Consider the perilous economic states of Greece, Italy and the U.K.

I disagree with Josh Marshall's analysis only at the very end...


Again, these numbers are total nonsense and intended as nonsense. It’s not a real proposal. It’s just the US President’s effort to toss another smoke bomb into the summit.

No: Not a smoke bomb. An atom bomb.

Putin decided to put Trump into office for many reasons, but the main motive was the destruction of the NATO alliance. This goal has been crystal clear since the summer of 2016.

Manafort in prison. I am so sick of "flip" predictions. Manafort ain't flipping. Look at how he's living...


I have NO IDEA why Manafort is allowed to have a laptop and cell in jail. I've never heard of this in any of the jurisdictions I've worked in (DC, federal; Massachusetts, state; and New Hampshire, state). Of *course* Manafort's feeling no pressure to flip—he's living like a king.

2/ He has his own bathroom, shower, workroom, and wardrobe? Wow, we're really *bringing the hammer down* on white-collar crime. It's almost like the corrupt politicians who get charged with white-collar crimes are writing all the criminal statutes. In fact, it's *just* like that.

3/ Despite all this—despite Manafort telling people that he's being treated like a VIP—he's complained in filings about the facility he's in and his lockdown status. Folks, this is why Trump is winning: America bends over backwards for rich criminals. We need to wake up—and fast.

Fortunately, there's a solution. But even if Manafort is placed into less palatial digs, the situation remains the same: He can lie and defy and practically beg for a conviction. Nothing matters. A pardon is in the bag.

I know what you're thinking: "But if he accepts a pardon, he can still be forced to testify, and he won't have any Fifth Amendment rights!" Oh, just stop it. Trump will pardon any further crimes as well.

Face facts, folks. Between the pardon and the plutonium, no member of the Trump crime crew has any motive to cooperate with Mueller and every motive to hang tough. Until I see state charges against one of these guys, I consider the very concept of hope laughable.

Cohen won't rat out Trump either, no matter what people are saying right now. Remember when all the smartypants-types assured us that Steve Fucking Bannon was about to turn, or had already turned? Aren't you sick of being misled by cockeyed optimists? Positive thinking is killing us. No matter what assurances Lucy gives us, she's always going to pull the football away at the last second.


Two weeks ago, Trump, in a tweet, gave credence to Putin’s claim that Moscow did not intervene in the election. “Russia continues to say they had nothing to do with Meddling in our Election!” Trump maintained. Instead, Trump insisted, the real scandal was that the Democratic National Committee in 2016 did not hand over to the FBI its servers, which were hacked by Russian intelligence. This server business is a phony Fox News-fueled scandal; the DNC provided copies of its servers to the bureau. And even if there were anything untoward about the server matter, it still would pale in comparison to a foreign adversary assaulting an American election with hacks and the dissemination of stolen material.

The aim of Trump’s tweet was to legitimize Putin’s disinformation and to divert attention from Putin’s operation to a distraction. In doing so, the president was stunningly serving Putin’s interests rather than those of the United States.

"Are you now or have you ever been a Democratic voter?" Just look at the vile questions put to Peter Strzok... 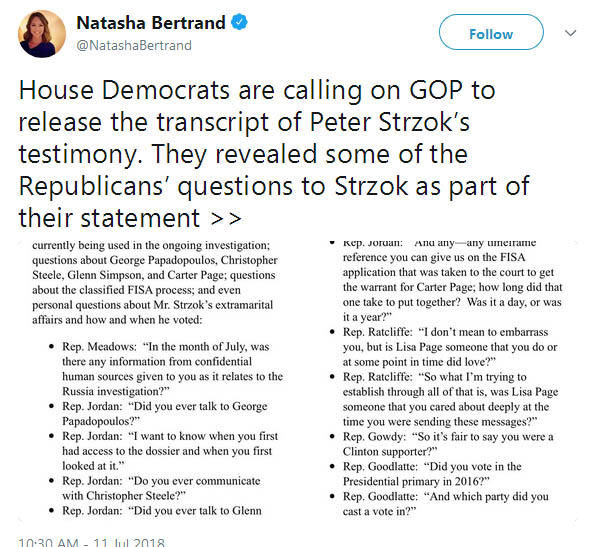 This is worse than McCarthyism. At least McCarthy demonized Communists, although his witch-hunt quickly segued into an excuse to undo the New Deal and to toss labor leaders into prison.

For nearly forty years, a magnificently-funded propaganda has created a sick, distorted view of the Democratic party. Many Americans (even liberals) (hell, especially liberals) think that all Dems are evil, subhuman conspirators, and that anyone who favors a a Democratic candidate must be party to the conspiracy.

For the truth about Strzok, I strongly encourage you to view the Rachel Maddow segment embedded below.