This image appeared on this twitter thread a day before Stormy Daniels released the sketch of the man who threatened her.  The image above depicts an unidentified man (left) standing with Keith Schiller (right), Trump's bodyguard.

To refresh your memory, here's the sketch: 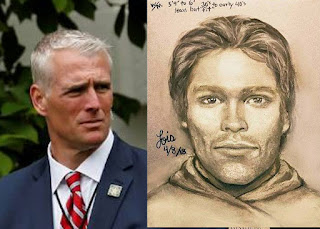 By no means would I say: "It's a match." The hair is certainly different. On the other hand, there have been instances in which a police sketch bore far less resemblance to the person later identified as the perpetrator. The Son of Sam case offers a classic example.

One problem is that good-looking guys tend to look more-or-less alike.

All in all, I hope someone identifies the silver-haired gentleman. Incidentally, it has been pointed out that the sketch somewhat resembles Stormy's ex.

Trump, in his usual vulgar fashion, went out of his way to proclaim that the man in the sketch doesn't exist.


“A sketch years later about a nonexistent man. A total con job, playing the Fake News Media for Fools (but they know it)!”

Before Trump went into his usual tough-guy "hard sell" routine, I was more open to the argument that Stormy was engaging in hyperbole. Now, I'm persuaded that the man in the sketch is real. Why does Trump act in this self-defeating fashion? Any previous president would have left the denials to a press secretary, and only in response to a direct question from a journalist.

Cohen: Here's the most important article about Michael Cohen anyone has yet published. It appears that Cohen's links to the Russian underworld may predate The Donald's.


Cohen has for decades had close personal and professional relationships with many citizens of the former Soviet Union.

Cohen continued to use Estrin’s address on legal filings as late as 1999, but he added several new addresses during this period, including 22-05 43rd Avenue, in Long Island City, Queens — the taxi garage. It was the headquarters of the New York branch of the empire of Simon Garber, a Soviet emigre who also has had cab companies in Chicago and Moscow. Charismatic and silver-haired, Garber released kitschy TV-style advertisements, in Russian, for his company.

Over the years, Garber has been convicted of assault in New York, arrested for battery in Miami, and pleaded guilty in New Jersey to charges of criminal mischief involving him breaking into three neighbors’ homes, shattering glass doors, smearing blood all over, and taking a shower. In Chicago, his taxi fleet included wrecked vehicles with illegally laundered titles.

Also see what Josh Marshall has to say.


So Michael Cohen’s uncle Morton Levine’s social club was the headquarters of Russian organized crime in the U.S.

According to Levine, who is apparently still alive, all his nieces and nephews owned shares of the El Caribe and still do. Levine told the AP that Michael Cohen owned his stake in the club until Donald Trump was elected President when he “gave up his stake.”

That was probably wise!

It was also very recent.


As for the Sean Hannity link: It seems fair to speculate that Hannity used Cohen's services for the same reason Broidy and Trump did. Hannity is a wealthy man; if he truly had need of real estate advice, he would have hired the services of a specialist. I've quite enjoyed Hannity's attempts to claim that he was never a Cohen client while at the same time insisting that their conversations were covered by attorney/client privilege. Apparently, Michael Cohen is the Schrodinger's cat of Shysterville.

By the way: I'm out of the hospital following heart attack number two, a cute little myocardial infarctionette which was resolved by a new stent.

Yet another artery has a 100 percent blockage. Fortunately, the body -- of its own accord -- created a collateral route around this impediment; unfortunately, I don't think that this alternative path allows for the same amount of blood flow. It's a bit like driving a big rig truck down a small alleyway. Exercise may help, if it does not kill: The literature (which I've been studying) seems a tad contradictory.

As the semi-divine Gustav Mahler wrote in a program note: Freund Hein spielt auf! The second movement of the Fourth symphony says all that need be said of the merry dance with Azrael: He that hath an ear, let him hear.