Cambridge Analytica. Here's the expose that everyone is talking about.


Last month Nix told MPs: “We have never worked with a Russian organisation in Russia or any other company. We do no have any relationship with Russia or Russian individuals.”
Advertisement

That appears to contradict the company documents seen by the Observer, that list Russia as one of the countries where Cambridge Analytica and affiliate companies have clients.

Always remember that Cambridge Analytica has done highly sensitive work for the American and British intelligence. Always remember that CA is largely staffed with Tory-leaning MI6 agents, or "former" agents. Yet CA appears to be in large measure a Russian operation, revolving around the work of "Dr. Spectre," trained in St. Petersburg.

See here and here for the Russian ownership ties to CA.

Just as America must come to grips with the Trump/Alt Right connection to Russia, so too the UK must come to grips with the MI6 connection to Russia. If America needs to clean its closet -- and it does -- then the British people also need to pick up some ammonia and a scrub brush. So far, the process has not begun. Where are the speeches in Parliament? Where is the Panorama documentary? Where is the inquiry?

Why has not one British notable demanded an official inquiry into Cambridge Analytica, the firm that stands at the intersection of MI6 and the fiends who brazenly use nerve agents on British soil?

You want to know where to start the investigation? Start here.

Kushner deserves jail. Crime lord Jared Kushner lied on official documents, claiming that he had no rent-controlled tenants when in fact he had hundreds. He did this in order to sell the buildings at a huge profit.

Ayn Randroids cannot excuse this crime by making libertarian arguments against rent control. First, the law is the law. Second, the victims of Kushner's deceit were other capitalists, who paid much more for the buildings than they were worth.

Lindsay Graham has warned Trump not to fire Mueller, even though it is clear as day that Trump intends to do so. Although other Republicans have joined his cry, it seems that Lindsay Graham functions as the weathervane, or the coal-mine canary. Our democracy hangs by a thread named Lindsay -- an uncomfortable thought.

South Korea. Trump now threatens to pull troops out of South Korea, due to a trade dispute. Is this an excuse to get Americans out of a potential war zone? Does Trump intend to ignite a war with North Korea?

Eric Boehlert offers another example of the double standard for Dems:


reminder: if Bill Clinton had threatened to sue Paula Jones for $20M to keep her quiet, NYT reporters would've typed up the articles of impeachment themselves 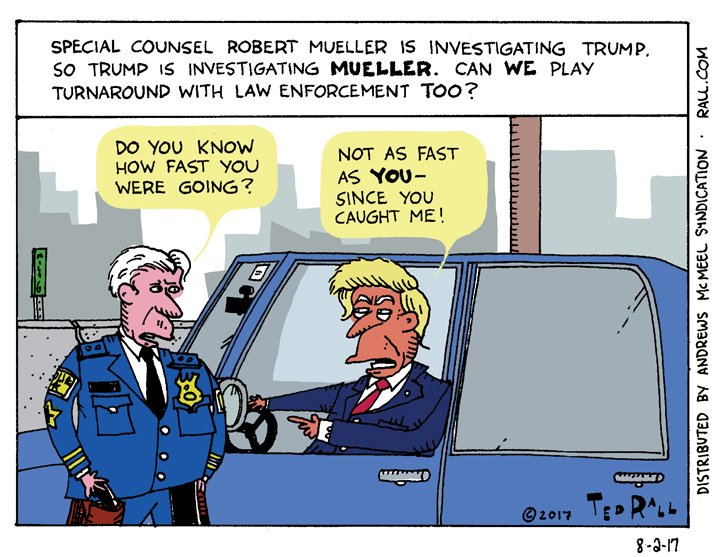 Kurt Eichenwald on the McCabe memos that went to Mueller:


Innocent person: “there are memos recounting those meeting? Thank heavens. That will show what happened.

Trump: There are memos recounting those meetings? They’re LIES! THEYRE FAKE!!! The guy who wrote them LIES! His former boss should he in jail!

Trump is guilty of something


What's amazing to me is that Trump doesn't have the slightest idea how to fake innocence -- a skill that should come as second nature to a seasoned con artist (which Trump is). Most children develop better lying skills by the age of 13.


"When you are innocent … act like it," Gowdy said on “Fox News Sunday“ when asked about Trump's repeated Twitter attacks on Mueller, whose probe has become increasingly perilous to the president and his inner circle. "If you’ve done nothing wrong, you should want the investigation to be as fulsome and thorough as possible."

Did Mueller start out with incriminating info? This Kos writer claims to have a secret intelligence source who has been doing data analysis for the Mueller investigation.


"They had evidence of collusion from day one," he insisted, "now it's all about seeing how high up the chain the corruption goes." He says our intelligence services have evidence of collusion with Russians by members of the Trump campaign, mostly in the form of SIGINT (signal intelligence, i.e. foreign wire taps). It was that SIGINT, both by our intel agencies and by our allies, that caused the investigation to kick off in the first place. What has leaked to the press, he says, would only be the tip of the iceberg. The most damning stuff has been kept secret to protect sources and methods. But the Mueller indictments actually hint that evidence runs much deeper than what has been publicly revealed so far.

This is how my friend described it: “Mueller is playing poker with a whole extra deck stuffed up his sleeve. He has the entire US intelligence apparatus at his disposal. When he calls someone in for an interview, he often already has something on them, something he knows they will lie about. Then when they lie, he has them... they've perjured themselves, and he has the documents or SIGINT to prove it. They have to flip and become a cooperating witness, otherwise they go down for the lie as well as the thing they lied about."

This is a pleasant picture, and not outside the realm of possibility. But my EMF meters detect the ghost of Louise Mensch whenever someone in the Resistance claims "I have a spooky friend whose name I cannot divulge..."