I'd love to write about other things, but nothing is more important than this:

That's a tweet from Van Jackson, an expert associated with the Center for Strategic Studies. (ROK = South Korea.) That advice from the Nelson Report was issued two days ago, on the 21st. The Nelson Report is a source which Josh Marshall has praised highly in times past.

Van Jackson's other tweets have been equally concerning:


Admin source tells me "Everyone wants 'preemptive war' now except for Mattis." Normal Korea experts have no idea how serious this is

From other convos, I infer that "everyone"=McMaster, Pompeo, Haley, Dunford, Pottinger, and Trump. Nobody cares what Tillerson thinks

War w NK not imminent. "Everyone" but Mattis has reckless preferences for aggressive action. Situation is powder keg but fuse not yet lit

From other convos, I infer that "everyone"=McMaster, Pompeo, Haley, Dunford, Pottinger, and Trump. Nobody cares what Tillerson thinks


Trump upped the rhetoric another notch in an interview with Fox Business Network broadcast Sunday, in which he said Washington was "so prepared, like you wouldn't believe" for any contingency with Pyongyang.

"You would be shocked to see how totally prepared we are if we need to be," Trump said. "Would it be nice not to do that? The answer is yes. Will that happen? Who knows, who knows."

I heard Trump say these words during a recent newscast. It seemed obvious to me that he was dying to say more -- and that he had, perhaps, already said too much.

As readers know, I have flirted with a theory that America possesses a secret anti-missile program, one which gives us, in effect, first strike capability. This is not a popular theory and I freely admit that little evidence supports it. But Trump's own statements indicate that he has been initiated into such a secret, and that he would love to exercise this power. The man is certainly acting like someone who thinks he can hurl nukes without playing catcher.

Any American "victory" will, of course, be Pyrrhic. If war ends with North Korea incinerated and the United States uninjured, this nation will be loathed by the rest of the world. We would win the war and lose our allies -- which will, eventually, lead to the loss of our superpower status.

On the other hand, we could face a far worse outcome.

EMP. According to Forbes, Congress has received a CIA report warning of a North Korean EMP attack.


Unlike a conventional ICBM which launches and then goes into a suborbital flight before re-entering Earth’s atmosphere, an EMP warhead need not re-enter Earth’s atmosphere before exploding hundreds of kilometers above its target. Super-EMP weapons are designed to produce a high level of gamma rays, which generate the sort of high-frequency electromagnetic pulse that is most damaging to the broadest range of electronics, the report concludes.

And if the EMP device just happens to be part onboard an orbiting satellite, North Korea need only detonate the device remotely via encoded signal. Pry, Chief of Staff of the now de-funded Congressional EMP Commission, told me that at an altitude of 300 kilometers, the resulting electromagnetic pulse would affect all 48 contiguous states.

A warhead fused for an EMP in a satellite or ICBM could work on a timer, via GPS, or using an altimeter, says Pry, a nuclear strategist formerly with the CIA, who has a certificate in nuclear weapons design from the U.S. Air Force nuclear weapons lab. He says North Korea could even rig the warhead to detonate in the event that it was intercepted by our own missile defenses.

The consequences of such a detonation would be dire.

“The U.S. can sustain a population of 320 million people only because of modern technology,” said Pry. “An EMP that blacks-out the electric grid for a year would [decimate] the critical infrastructure necessary to support such a large population.”

In three days, the food supply in local grocery stores would be consumed and the 30-day national food supply in regional warehouses would begin to spoil, says Pry. In one year, he contends that up to 90 percent of the population could perish from starvation, disease, and societal collapse.


For the past month or so, various media organs (including Popular Mechanics) have discussed the grim possibility of an EMP attack. This journal adds some important details:


The EMP commission was actually defunded on September 30th. It was created in 2001 and has been extended several times over the years, the last time in 2016. This extension was allowed to lapse, even as North Korea issued a specific threat in September to carry out an EMP attack and published a technical paper in the official communist party paper “Rodong Sinmun” outlining some details about it.

"Defunded?" Well, at least Trump won't have to worry about the political consequences. He won't have much of a nation left.

Here is the North Korean threat, in Google translation: 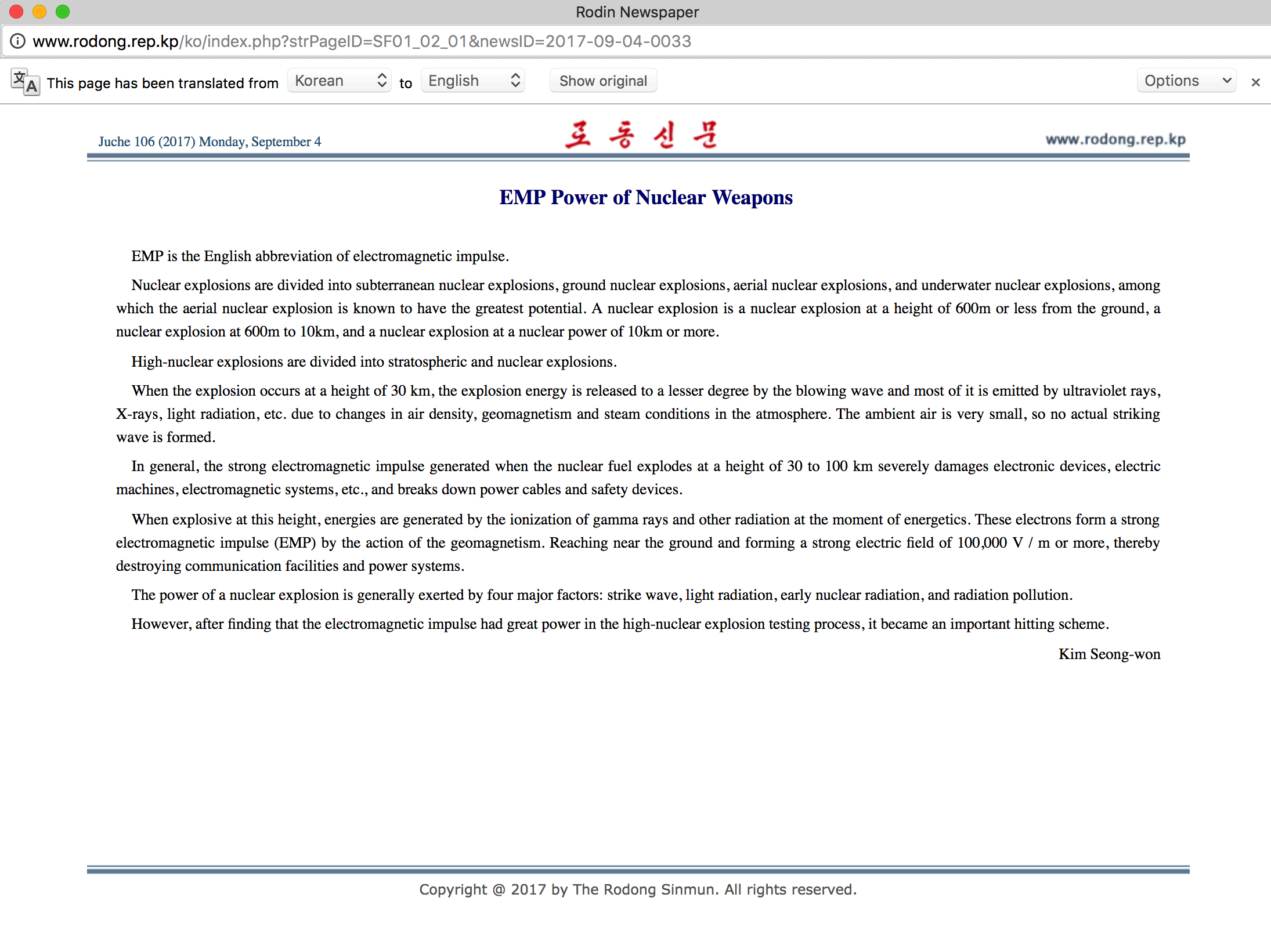