If you're following the Mueller investigation, take note: Mueller has hired a prosecutor named Kyle Freeny. (Despite the name, the article uses the pronoun "she.") She was, until quite recently, involved with a prosecution against the producers of The Wolf of Wall Street, a film allegedly financed with money looted from Malaysia.

(I enjoyed that movie, although the debauchery became tiresome after the first hour. Considering the subject matter, the behind-the-scenes scandal seems appropriate.)


The Justice Department billed the "Wolf of Wall Street" case as a product of the Kleptocracy Asset Recovery Initiative, an effort to pursue the proceeds of foreign corruption and return such monies to the public in the affected countries.

Justice Department officials including former Attorney General Eric Holder announced that the same kleptocracy project is probing the transfer of assets overseas by Ukrainian officials, including former President Viktor Yanukovych. Manafort served as a consultant to Yanukovych and his Party of Regions — work that has triggered suspicions about the former Trump campaign chief because of Yanukovych's warm relationship with Moscow.

In other words, Freeny's "beat" is uncovering laundered money stolen from kleptocratic states. We all know that Putin is the world's foremost kleptocrat.


The U.S. government has "thousands of intercepts" that can be used as evidence against Ukrainian billionaire oligarch Dmitry Firtash, federal prosecutors told a judge Friday as the fight over his extradition to Chicago rumbled on.

But lawyers for Firtash — who has ties to President Donald Trump's former campaign manager Paul Manafort — walked back their recent claim that Firtash could be brought from Austria to the U.S. "within weeks."

Firtash, who has links to Russian President Vladimir Putin's Kremlin, has been fighting extradition from Vienna since 2014


Cambridge Analytic and the Russian connection. There is much to say about Firtash -- but right now, I'd like to focus on his links to Cambridge Analytica, the UK firm which employs many Tory-leaning "former" spooks, and which did so much to rig the election. Many articles have claimed that CA (as I'll call it from time to time) is owned by Robert Mercer, the financier and tech wizard who also pumps money in Breitbart. That claim is not quite accurate, as we will see.

A number of published articles have also alleged that the firm was run or advised (accounts differ) by Steve Bannon and Michael Flynn. We may fairly conclude that CA and Breitbart are intimately linked, and that Flynn played a key role. 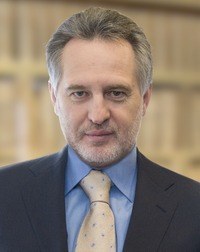 How does Firtash -- a notorious Ukrainian gangster linked to both Putin and Paul Manafort -- tie into the firm? To be honest, we can't be sure. We know that a CA/Firtash link exists (doubters need only google Firtash Cambridge Analytica), but we don't know its precise nature.

However, we may soon have more details, thanks to the attempts to extradite Firtash.


Adding to his revelation earlier this week that the U.S. secretly recorded a phone call in which Firtash discussed a co-defendant's trip to Chicago to meet with Boeing executives, Bhachu said the government has "tens of thousands" of documents and "thousands of intercepts" that can be used against Firtash.

We've known for a while that intercepts exist, and that they involve discussions of efforts to deep six Hillary, but the scope has not been revealed until now. I hope that at least some of those intercepts will involve Manafort and Cambridge Analytica.

More about Firtash and Cambridge Analytica. By now, most of you have read about the role CA played in the 2016 election. Despite all the recent talk about Facebook's role in the election (Mueller recently subpoenaed data from Facebook), many have forgotten that CA used data from those ubiquitous and iniquitous Facebook quizzes to create exquisitely-detailed voter profiles.

As noted above, the oft-heard claim that Mercer owns CA is oversimplified. The ownership of SLC -- a "private" psychological warfare group which functions as the parent firm of Cambridge Analytica -- is an absolute tangle. In fact, the ownership of this firm, or constellation of firms, has become so thoroughly convoluted that I suspect that someone has made a deliberate attempt to confuse.

This article tries to unravel the knot; this piece does an even better job of it...


Many articles have reported that the U.S. billionaire Robert Mercer is the owner of Cambridge, but some basic Googling would have shown that this isn’t true. The Daily Beast got it right; Cambridge Analytica’s press releases refer to it as “the U.S. subsidiary of SCL Group.” But the relationship between Cambridge Analytica and SCL is far from easy to decipher.

The privately-held SCL Group Ltd. (UK co. #05514098) has a half-dozen subsidiaries, with an overlapping group of directors. One subsidiary is SCL Elections. Cambridge Analytica’s website in December 2015 listed its New York address as Suite 2703 in the News Corp. building, 1211 Avenue of the Americas, the same New York address formerly listed on SCL Elections’ website as its New York office. (Both websites have since been updated, with new addresses.) SCL Elections is entirely owned by executive Alexander Nix.

Nix? Wasn't that the name of the bad guy in Lord of Illusions? His goal was to destroy the entire universe and become The Only Thing Left, which makes him the most ambitious villain in the history of fiction. I wonder if Alexander ever formulated a similar goal?

British real estate tycoon Vincent Tchenguiz -- a heavy contributor to the Tory party -- is, one could argue, the British Trump. Until fairly recently, he was the major owner of SCL, and some say he still is, though not directly. (At this point, things get fuzzy.)

I mention Tchenguiz because he is the one financially involved with Dimitry Firtash -- the criminal oligarch who forms a direct bridge between Manafort and Putin.


Tchenguiz remained involved in SCL Group for 10 years, despite its lack of financial returns. Vincent Tchenguiz is mainly known as a real estate investor; his reasons for acquiring shares in SCL in the first place are as opaque as his reason for divesting them. From the outside, it seems an odd, unprofitable sideline.

Fascinating! So why was Tchenguiz involved in this concern? It was outside his area of specialization, and it doesn't seem to have been a cash cow -- quite the opposite, in fact. As another blogger likes to say: "If it doesn't make business sense, it's gotta make some other kind of sense."

It may be worthwhile to note here that Russian oligarchs love to park their money -- or launder it -- in real estate located in western countries.

When we consider the histories of Donald Trump and Jared Kushner, an obvious pattern emerges: Some real estate tycoons make huge gambles which can easily go wrong. (See, for example, Kushner's overpriced skyscraper on 666 Fifth Avenue.) These problem properties require massive infusions of cash from investors who do not necessarily expect to see a profit, and may even be willing to take a loss.

Where does one find these financial angels? They tend to hail from the land of snow and borscht.

I don't know enough about Tchenguiz to speculate as to whether he ever found himself in that sort of predicament. I simply ask you to consider certain possibilities. (Perhaps my British readers can enlighten us further...?)

Cambridge Analytica does very sensitive work for the western intelligence services, despite the financial links to Russia. This may be the ghastliest security hole in the history of intelligence. In order to create such a hole, the Russians would have needed to recruit western moneymen to act as fronts.

Maybe we'll have a better grasp of what this company is up to once Mueller issues a report. I do hope that those intercepts prove illuminating.

The Stone connection. Although Roger Stone likes to keep a certain distance between himself and the actual doers of dirty work (one of Stone's rules: "Always use a cut-out"), we should never forget that Stone and Manafort were partners, and that Stone himself was involved in the Ukraine campaign. In fact, Stone has bragged about being the father of the political yard sign in Ukraine. From a 2007 profile in The Weekly Standard:


I arrange to see Stone in Manhattan, where he spends roughly one day each week, and Miami, where he lives. But beforehand, he threatens to take me to Ukraine, where the local press has outed him as being involved in the parliamentary campaign of Volodymyr Lytvyn, an Orange Revolutionary alum who's been mentioned as a future president. Like many American political consultants, Stone does the odd election overseas, though he likes to keep it quiet, since it often causes a local furor because "Americans are now hated everywhere in the world--thank you, George W. Bush."

"I don't particularly want to go," he says. "Our lives will be in danger. We will have bodyguards. Plus, the food sucks." On the upside, he says, we'll have a buxom translator named Svetlana, and "We can stop over in Amsterdam on the way home, for all the obvious reasons." But, it turns out we don't need to go; his guys on the ground have it covered. But it's a constant struggle, he says: "The Russians love intrigue." As though he doesn't.

He is in perpetual dispute with Lytvyn's local advisers, who he calls the Politburo. They deliberately mistranslate his ads to reflect their own clunky slogans, and he resents their interference, since what could they know about winning free and fair elections, being recently converted Commies and all. The atmosphere is charged enough that he has now taken to sending secret messages directly to the candidate, nicknamed "Mister." Since his team assumes all their communications are monitored, they use code names such as "Buckwheat" and "Beetle." Stone's is "Mr. Pajamas," the same one used by ur-Nixon Dirty Trickster Murray Chotiner, one of his personal heroes and mentors. (Lytvyn's party was successful in the elections.)


Well well well. One wonders if "Mr. Pajamas" will show up in those thousands of Ukrainian intercepts now being studied by Robert Mueller. (Stone also fancies the name "Jason Ranier.")


Hillary Clinton could stand in the middle of 5th Avenue and do nothing, and they would say she shot somebody.

Donald Trump could shoot someone on Fifth Avenue and people would blame Hillary.
posted: 12:19 PM