Donald Trump wants his campaign to make money, not to make himself president: That is the clear lesson from this TPM analysis. He's spending more on arenas than on staff, and the rallies are "rock concert" venues designed to sell merch.


All and all, the Washington Post estimated that Trump and his family have made $7.7 million so far in the campaign by spending on Trump-owned services from event space to air travel.

Campaigns are required to pay market value on items it purchases, and there is nothing per se illegal about using Trump-owned vendors.

But he's not paying market value: That's the lesson we learn from this eye-opening post, which reveals yet another scandal that would end the chances of any Democratic politician.

In short and in sum: The Trump campaign rents office space in Trump Tower. Not illegal. However, Trump (despite his claims) is not the sole funder of this campaign: Donations have come in from the website. Once that source of funding kicked in, Trump Tower immediately started to charge FIVE TIMES THE RENT.

During this same time period, the number of staffers went down. Obviously, if he has fewer staffers, he probably is not using more space -- certainly not five times as much space. 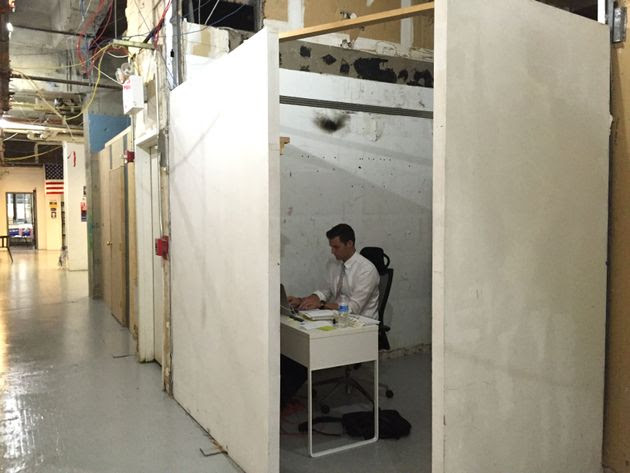 Adding insult to injury: To judge from this photo, the office space is unfinished, unprofessional and just...awful. I doubt that Trump Tower could have rented this space to anyone else.

The fact that Donald Trump is scraping after this kind of spare change tells me that he cannot possibly be worth what he claims. If he were truly a billionaire, why isn't the guy in the picture to the right sitting in an office with a marble entranceway, with original paintings by Frederick Remington and Albert Bierstadt hanging on the walls?

The campaign is clearly just another scuzzy, Trumpy money-making scheme. Trump is using other people's donations to profit from the sales of his own swag.

But that doesn't mean that I think Trump has given up on victory. I heard on a recent political radio show (was it Sam Seder? Thom Hartmann?) that lower-level campaign staffers report, off-the-record, that the higher-ups all seem to be hiding some great and important secret.

I think that a very dirty covert political op is in the works. Very dirty. Perhaps even something on the scale of 9/11.

When that particular piece of shit hits the fan, Alex Jones will insure that every paranoid on the internet interprets the event as an operation directed against Trump, rather than an operation perpetrated to help Trump.

Trump is pinning his hopes on something big, an unprecedented exercise in political spectacle. A game changer. He doesn't care about traditional campaigning except insofar as he can use the campaign to fatten his wallet.
posted: 7:07 AM