A few days ago, we discussed the infamous note from Trump's doctor, headed "To Whom My Concern." Remember that one? The utterly unprofessional message intended to assure the world that Trump would be the "healthiest individual ever elected to the presidency"?

Most people suspect that the text was written by Trump himself. I did not know until today that Trevor Noah of The Daily Show did a hilarious segment on this note. 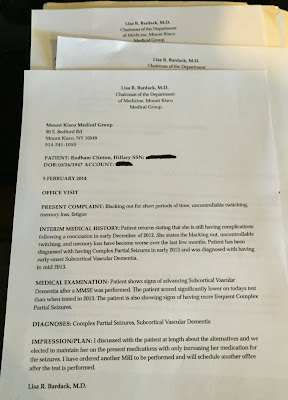 What you may not know is that there is another "iffy" doctor's note floating around out there -- one allegedly written by Hillary Clinton's doctor, Lisa R. Bardack. This report speaks of dementia, seizures and black-outs.

Is this text fake? Consider: The message lacks a signature and is written in a very unprofessional fashion. Why does the phrase "in mid 2013" get its own paragraph? "I discussed with the patient at length about the alternatives and we elected to maintain her on the present medications with only increasing her medication for the seizures." Does that garbled syntax sound like the writing of someone who attended an institution of higher learning?

There is no logo for the Mount Rico Medical Group at the top of the page, and none of the small-type official filing information that appears on my own medical documents. Why would a "samizdat" release by Hillary's enemies redact the SSN and the account number?

This forged letter is part of a much larger right-wing smear campaign intended to imply that Hillary Clinton is a very sick lady. This Kos diary summarizes the various manifestations of this meme.

For a while, I presumed that the fake Bardack letter was written by Trump's old friend Roger Stone, who has been concocting these things since the Watergate era. (Not too long ago, I received a private message from someone who knew Stone back then: Young RS was incredibly proud of his latest creation, a letter of endorsement from a fake group called "Gays for McGovern." Keep in mind that the year was 1972; attitudes were different.)

Yep, this sure seemed like a Stone job. But then something strange happened...

Yesterday, I was about to reprimand my dog George for a small accident in the house. He then showed me a letter that he had somehow fetched from the mailbox... 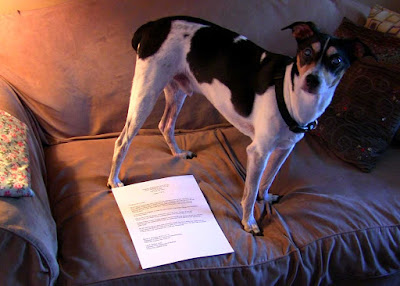 The letter reads as follows:


To Whom My Concern:

We are famous doctors who have recently become veterinarians and we have examined a rat terrier named George owned by Joseph Cannon. We are pleased to report that George is the only dog in Maryland whose poop is so good-smelling that he probably should be allowed to go anywhere he wants to go, even in the house. We have never before seen such astonishingly excellent poop.

In our professional judgment, it would be a great mistake to get mad at George if he should have an accident indoors.

Also his pee smells like flowers. If allowed to pee in the house, George, we can state unequivocally, will create the best-smelling carpets in the United States of America.

To keep George in super amazing condition, we recommend large amounts of beef from Mission Barbecue and also roasted chicken breast, and please don’t mix it with all of that oatmeal and green beans.

We feel that George is a much more awesomely terrific dog than is Wally, that stupid stuck-up beagle down the street who thinks he’s so great but he’s not and that’s why they make him spend so much time in the yard because he’s a bad dog. #stupidwally


A closer shot of this mysterious letter is at the bottom of this post. I invite the reader to study this message for any telltale signs of forgery.

If there are other "To Whom My Concern" letters floating around out there, please share! 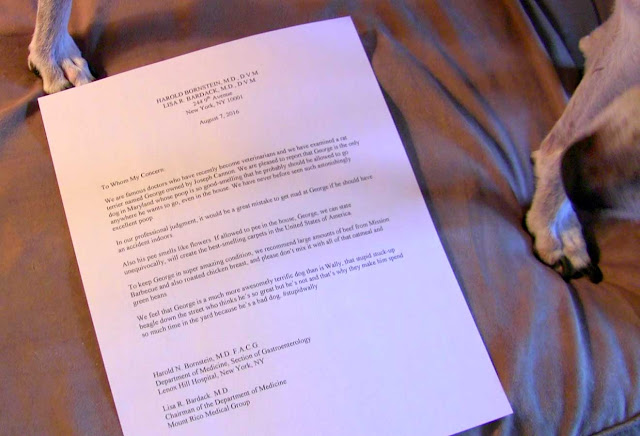