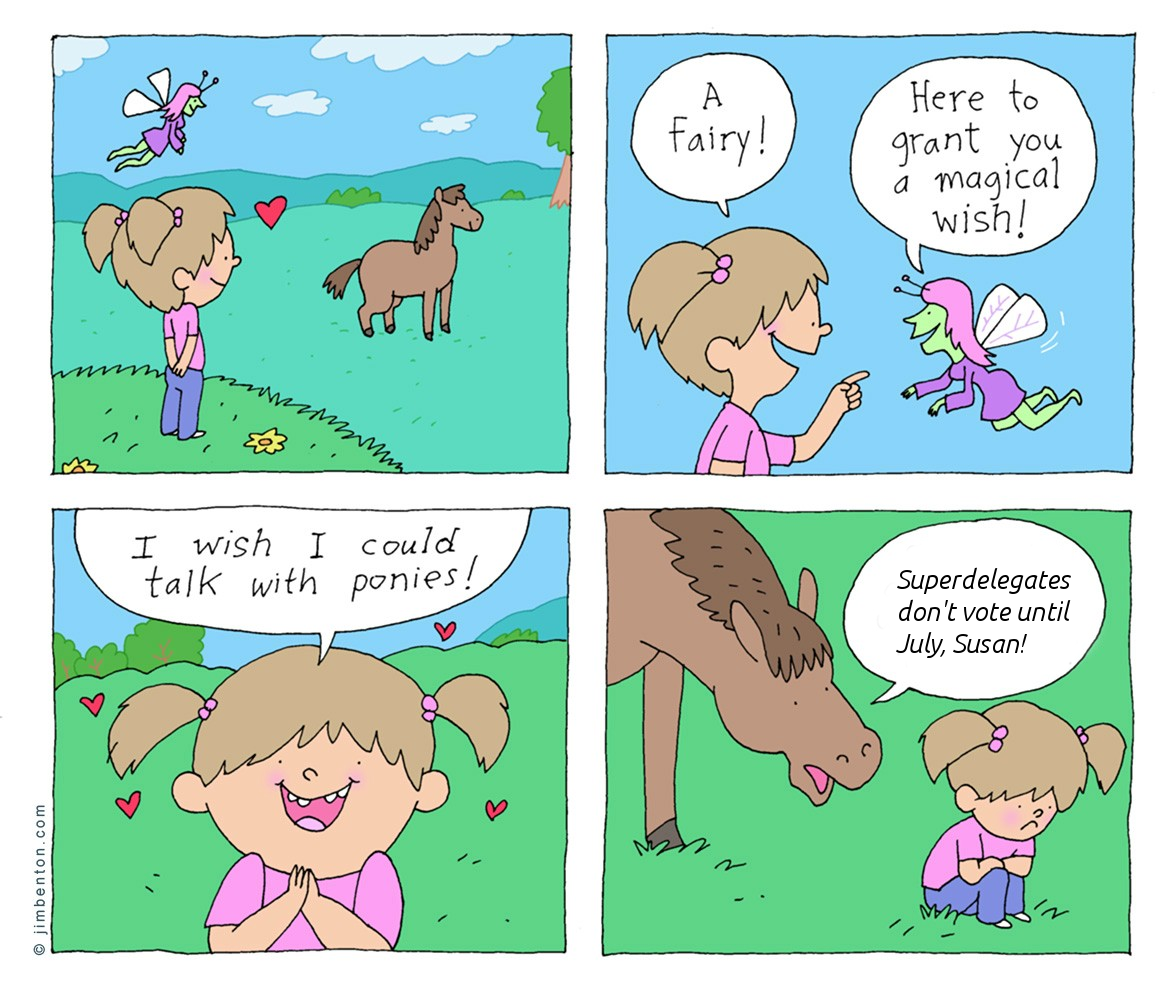 I just thought of a way to get the supers to flip: Demand to see Hillary's birth certificate.

Speaking of wishes, here is my new list of desiderata for new Democratic primary rules:

1. ALL CLOSED PRIMARIES. A political party is not an institution of government; it's much more like a private club. Outsiders have no right to game the system.

2. No-one can run for the nomination unless he or she has been an actual Democrat for three years or more.

4. Only four big voting days. Divide the map into four regions; the candidates have a month -- no more -- to win over that region.

5. Remove the superdelegate system. A leadership committee (including representatives from all competing factions) shall have the ability to release the delegates from their pledges, if circumstances should so dictate -- for example, if a few skeletons come jumping out of the presumptive nominee's closet.

Ideally, I'd like the voting rights stripped from any young nitwit who screams about rigged elections after being handed a provisional ballot because he didn't know he had to register. In fact, I'd like to see such people whipped, branded on their foreheads, and forbidden from holding non-menial jobs. Perhaps they could be hunted for sport...?

Hillary the outsider. The biggest lie in political history is that the Clintons represent the Establishment. They never did. Our friends at Skydancing direct our attention to this piece in the Atlantic by Peter Beinart...


Many forget how devastating Clinton’s 2008 loss was. Over the course of the campaign, her party’s most powerful leaders—people she had worked with for decades—betrayed her. Senate Majority Leader Harry Reid sought out Barack Obama and secretly urged him to challenge her. Former Senator Majority Leader Tom Daschle, who according to John Heilemann and Mark Halperin’s Game Change, considered Clinton an “icy prima donna,” did as well. Chuck Schumer publicly endorsed Clinton; as her fellow senator from New York, he had to. But he also privately urged Obama to run. West Virginia Senator Jay Rockefeller, an old ally from Clinton’s health-care fight, endorsed Obama and said he was doing it for his kids.

Ted Kennedy endorsed Obama publicly, despite being repeatedly begged not to by Bill Clinton. So did Representative Lois Capps, even though Bill had campaigned for her, spoken at her late husband’s funeral, and employed her daughter at the White House. Bill had also employed former Energy Secretary and U.N. Ambassador Bill Richardson. Nonetheless, Richardson—who ran himself in 2008—made a deal to send his supporters to Obama if he failed to meet the delegate threshold at individual Iowa caucus sites. He did so, according to Heilemann and Halperin, despite having promised the Clintons he would not. James Carville dubbed him “Judas.”

That wasn’t even the worst of it. Civil-rights legend John Lewis endorsed Clinton and then rescinded his endorsement to support Obama. Claire McCaskill betrayed the Clintons twice. They had campaigned hard for McCaskill when she sought a Missouri Senate seat in 2006. Then, that fall, she publicly declared that “I don’t want my daughter near” Bill. McCaskill assuaged the Clintons’ fury with an emotional apology to Bill. Then, in January 2008, she became the first female senator to endorse Obama.


I keep recommending Conason and Lyons' The Hunting of the President, which shows that the media and the DC Establishment always treated Bill Clinton as though he were a dead bird in Central Park -- something to be scooped onto the nearest trash heap.

The funniest man in American politics. Ladies and gentlemen, I give you Lord HA HA. His latest headline is a gutbuster: Bernie Sanders is Still the Democratic Front-Runner. Clinton's FBI Indictments Coming Soon.
posted: 3:19 PM