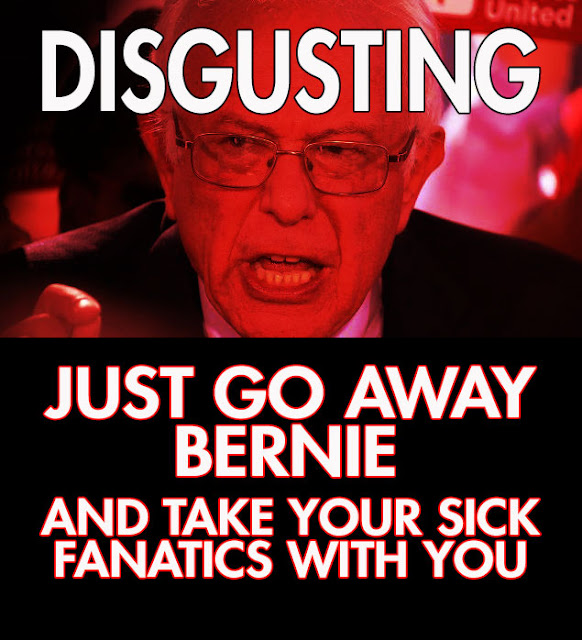 
Looks to me like Bernie Sanders' supporters caused the chaos at the Nevada Democratic convention.

At the point where Sanders' personal goals interfere with those of the Democratic Party (on whose ticket he is seeking a place), it's time for him to go. That time has come, in my view.

Goodnight Bernie, please come back in 2020, on some other party's ticket.


Sanders won't leave and he won't tell his zombie followers to behave. Everything Sanders has done, is doing and will do proves my theory: He is dancing to Roger Stone's tune, just as Al Sharpton and John Anderson did in previous elections.

What a coward Bernie is. I used to admire him; now I cannot stand that man. If he got within spitting distance of me, he'd need a beach towel.

ADDED NOTE:
A reader has pointed out the eerie similarity between the BernieBro riot in Nevada and Roger Stone's "Brooks Brothers" riot in Florida, 2000.

If the trick worked before...

Here are some videos of the Sanders mob in action. Disgusting!


It was only a little over a week ago that dozens of angry Bernie Sanders fanatics turned an appearance by Hillary Clinton in East L.A. into a gauntlet of screams and obscenities directed at her supporters. In spite of that fact, backed up by a whole slew of first-person accounts and on-scene pictures and video, there are still those out there who maintain that tales of Sanders's rabid fan base attacking anyone who supports Clinton, either on social media or in person, amount to nothing more than a myth. That there simply is no problem, or that if there is, it has a direct equivalent on the Clinton side. They deny the months of atrocious and often delusional behavior online and now, as the path to the nomination for Sanders has narrowed down to nothing, the very public lashing out against the sworn enemy of these dedicated disciples -- Clinton.

I don't expect what happened at the Nevada Democratic Convention yesterday to convince any of those particular people given the depth of their denial, but for the rest of us it's yet another example of just how far off the rails the Sanders campaign has gone. So what did happen? It started when Sanders supporters on hand at the Paris Hotel and Casino in Las Vegas, where the event was being held, complained that a "minority report" they'd produced, alleging that 64 Sanders supporters had been denied delegate status, wasn't accepted by the state party. State Democratic officials explained that they'd denied the report because those supporters' records couldn't be verified or they weren't registered as Democrats by the necessary deadline. In response to that, a large group of Sanders supporters on-hand rushed the stage and loudly booed and shouted down Sen. Barbara Boxer when she called for unity against the Republican threat. They angrily rejected appeals for calm.

Yet the BernieBots continue to lie and lie and LIE about what happened.


That's how it is with these zealots: everything's a conspiracy against Sanders; he's not really losing by millions of votes, the votes in his favor are simply being suppressed; there's no problem with his rabid acolytes behaving like tantrum-throwing children, it's all a lie perpetrated by the greatest liar of all, Hillary Clinton. This is what it looks like when delusional devotion trumps the ability to accept reality.